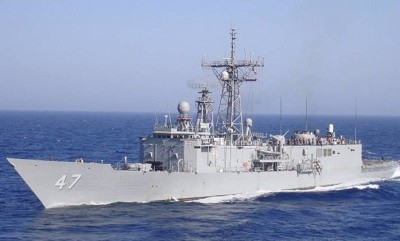 Caption: The ship carries out one of her recent patrols. 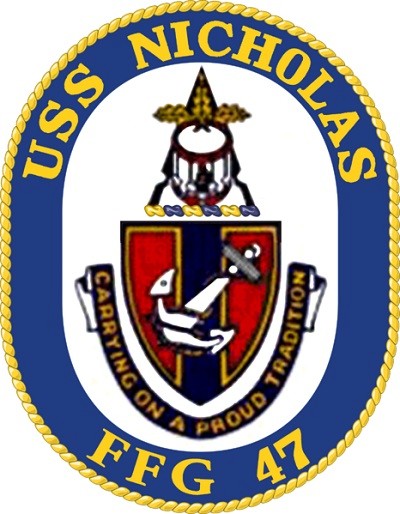 Samuel Nicholas was born in Philadelphia, Pa., in 1744 and received his commission as Capt. of Marines from the Continental Congress on 28 November 1775. He joined Continental Ship Alfred as Marine Officer at her commissioning on 3 December. On 3 March 1776, he commanded the first amphibious landing of American marines when the Continental Fleet under Commander in Chief Esek Hopkins attacked New Providence in the Bahamas. Leading a party of 200 Marines and 50 Sailors, Nicholas captured Fort Montague, Government House, and Nassau. The capture of New Providence brought badly needed cannon and ammunition to the hard-pressed Continental Army. Promoted to Major on 6 June 1776, Nicholas trained Marines for duty at sea and in the field with Gen. George Washington, becoming virtually Commandant of Marines, although such a title did not then exist. He died in Philadelphia on 27 August 1790.

The scarlet and gold colors throughout the shield are the traditional colors of the United States Marine Corps. The center blue stripe in the shield represents the United States Navy, and together, they symbolize the defensive strength of the Navy/Marine Corps team. The anchor alludes to the amphibious landings that Capt. Samuel Nicolas led in the Bahamas on 3 March 1776. The drum with the rattlesnake, a well-known symbol used during the Revolutionary War, represents Nicholas’ effort in recruiting and training marines for duty in the Continental Navy. The bayonets represent the participation of the Marines with Gen. George Washington at the second Battle of Trenton (Assunpink Creek) and the Battle of Princeton. Three gold oak leaves symbolize Major Nicholas’ steadfastness and courage, and also allude to his rank. The number three is significant for FFG 47 as the third U.S. Navy warship to bear the name Nicholas. “Carrying On A Proud Tradition” is inscribed surrounding the shield, reminding Nicholas to continue to serve with distinction as her forbearers did.

Nicholas operated initially with Destroyer Squadron Six out of Charleston, S.C. The ship deployed to the Persian [Arabian] Gulf in 1988. The guided missile frigate took part in Operation Earnest Will, to maintain freedom of navigation within the Gulf against Iranian aggression. The Americans initially renamed and reflagged 11 Kuwaiti tankers, and Nicholas operated as one of the ships that escorted these tankers.

Following the Iraqi invasion of Kuwait on 2 August 1990, the United Nation sanctioned an economic blockade of the aggressor, that became known as Operation Desert Shield, by a coalition that eventually comprised 29 nations. That blockade failed to deter Iraqi aggression, however, and the coalition responded with Operations Desert Storm/Desert Sabre, an air and ground campaign, respectively, to oust the Iraqis from Kuwait (17 January–28 February 1991).

Nicholas sailed in the Adriatic in 1995 with Standing NATO Force Atlantic to enforce Operation Sharp Guard, a joint NATO and Western European Union naval blockade of shipments into former Yugoslavia to limit the fighting therein. A boat filled with Albanian refugees attempting to flee to Italy capsized, allegedly when a ferry rammed her in the darkness (September 1995). Nicholas rescued 16 people, including a four-year-old child, and provided them with food, water, and medical assistance. The ship also recovered three bodies from the wreckage.

Al-Qaeda terrorists attacked the United States on 11 September 2001. Nicholas visited Valetta, Malta, during her deployment to the Sixth Fleet in the Mediterranean, but she emergency sortied and patrolled the Mediterranean for terrorists.

Pirates fired on Nicholas west of the Seychelles on 1 April 2010. The frigate and her embarked SH-60B Seahawk defeated the pirates, sank their skiff, and captured their mother ship and five Somali pirates (Gabul A. Ali, Abdi W. Dire, Abdi M. Gurewardher, Mohammed M. Hasan, and Abdi M. Umar) from the two vessels. A federal jury in Virginia convicted the five to life plus 80 years in prison (November 2010).

Nicholas, operating out of Norfolk, Va., is scheduled to be decommissioned on 17 March 2014.