The first Nassau, an auxiliary aircraft carrier (ACV-16), was named for the sound off the coast of Florida. The second Nassau (LHA-4) was named for the Continental Navy and Marine Corps amphibious landing on British-held New Providence, Bahama Islands, from 1–4 March 1776. Commodore Esek Hopkins, Commander in Chief of the Fleet of the United Colonies, led a squadron consisting of sloops Hornet and Providence, and schooners Fly and Wasp, from Philadelphia, Pa., early in January but ice delayed their voyage until 17 February. Hornet ran afoul of Fly outside the Virginia capes and could not continue, and she therefore patrolled Delaware Bay. Deeming it unwise to cruise along the southern coast in the face of British naval strength, Hopkins led his fleet to Abaco in the Bahamas, which they reached on 1 March, and staged for a raid on New Providence. The following day, they seized two sloops on which Hopkins placed a landing party of 234 Marines and 50 Sailors.

At mid-morning on 3 March, Providence and Wasp covered Captain of Marines Samuel Nicholas while he led his men ashore on the eastern end of New Providence. The British did not oppose the landing, and the Americans advanced toward Fort Montagu, which opened fire and interrupted the invader’s progress. The defenders spiked their guns and retreated to Fort Nassau. The next day they surrendered Nassau and gave the Americans the keys to the fort. Hopkins then brought his ships into the harbor and spent a fortnight loading captured munitions, which included nearly 90 cannons and 15 brass mortars sorely needed by the Continental Army. British Governor Montford Brown, however, foiled the operation’s primary objective by spiriting away the bulk of the gunpowder which had been stored there. Fly rejoined her consorts off New Providence on 11 March.

Heavily laden with the valuable supplies, the fleet sailed from New Providence on 17 March, and on 4 April arrived off Long Island. While off Block Island, Hopkins’ ships captured schooner Hawk (belonging to the British fleet at Newport, R.I.) on 4 April, and at dawn the next day took brig Bolton. That evening the Americans added a brigantine and a sloop, both from New York, to their list of prizes. U.S. Brigantine Andrew Doria sighted Glasgow, a 20-gun British sloop carrying dispatches from Newport to Charleston, S.C., at about 1:00 a.m. on 6 April. The Americans battled the enemy ship for one and one-half hours before she came about for Newport. Andrew Doria pursued Glasgow with her bow chasers, but after daylight Hopkins ordered his ships to give up the chase, and headed with his fleet and prizes for New London, Conn., where they arrived on 8 April to land the captured military stores. 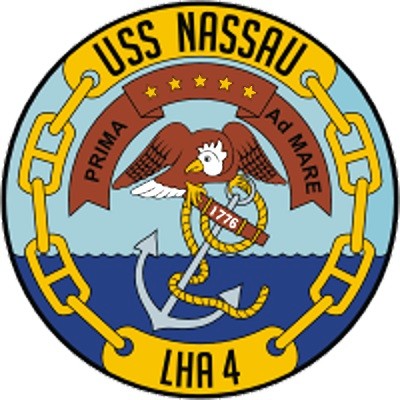 The eagle and fouled anchor design in the center of the insignia is a reproduction of the design first used by Sailors and Marines during the American Revolution. This design is credited with being one of the oldest military insignias of the United States Armed Forces. The date, "1776", has been added to the design on the anchor stock as further historical link to the first ever U.S. amphibious landing on Nassau, Bahamas, in 1776. The crimson banner above the eagle contains five gold stars, which commemorate the five battle stars awarded to escort aircraft carrier Nassau (CVE-16) for her World War II service. The banner also contains the Latin phrase Prima Ab Mare, which translates, “First from the Sea”. This motto accurately reflects the historic significance of the landing at Fort Nassau in 1776, as well as the modern capabilities and mission of the LHA class of amphibious assault ship. The sea and sky background represent the ship’s ability to conduct surface and airborne amphibious assault operations. Finally, the insignia is in circled by a nautical anchor chain with the name plate and hull number symbolizing the unification of the Navy and Marine Corps team.

AV‑8As deployed as a group with an LHA for the first time when 20 of the Harriers from Marine Aircraft Group, composed of Marine Attack squadrons (VMAs) 231 and 542, sailed to the Mediterranean on board Nassau (13 April–29 June 1981). The ship’s mission was to demonstrate the Navy and Marine Corps’ ability to deploy anywhere globally upon short notice. She steamed in company with aircraft carrier America (CV-66), and then sailed off the coast of Lebanon, ready to evacuate Americans endangered within that country during a civil war between Muslim extremists, Christians, and Jews.

A Marine North American Rockwell OV‑10A landed on board Nassau on 1 August 1983. The event marked the first time that a Bronco landed on an LHA, and the recovery opened up the possibility of a future role for OV‑10As in amphibious operations. The ship reported that Broncos that landed on board the ship would battle “treacherous cross winds while affecting a STOL [short takeoff and landing] landing within 300 to 350 feet…All in all, a very tricky business.” Nassau embarked more than 1,000 soldiers and approximately 180 vehicles for transport to Central America, on 20 August. The ship took part in Ahuas Tara II (Big Pine), a training exercise in those waters. She disembarked the majority of the soldiers and off-loaded their vehicles at Puerto Cortės and Puerto Castilla, Honduras, on 25 and 26 August, respectively. Two days later, she landed several Army utility landing craft (LCUs) and the remaining men at Colón. The ship returned to Norfolk on 2 September.

Nassau deployed to the Mediterranean (29 September 1987–29 March 1988), with the AV-8Bs of VMA-231 embarked, marking the first deployment of Harrier IIs to that region.

The ship, in company with amphibious transport dock Shreveport (LPD-12) and tank landing ship Barnstable County (LST-1197), and with Marines of the 22nd Marine Expeditionary Unit embarked, deployed as part of Mediterranean Amphibious Ready Group 2-89 (30 May–10 November 1989). The ships took part in Portuguese multi-threat naval exercise Galera 89, but a riot erupted ashore while they visited Lisbon, Portugal, on 11 October 1989. A bar room brawl in the Cais de Sodre dockside area of bars and nightclubs escalated into a clash between hundreds of U.S. Sailors and Marines, British Sailors from their aircraft carrier Ark Royal (R.09), and Portuguese policemen. The rioters overturned cars and smashed windows, and from 150–200 people sustained injuries. Assistant Secretary of Defense Louis A. Williams announced during a press conference that at least 142 U.S. Sailors and Marines received treatment for various injuries, most of them from Nassau. The ship’s medical department treated at least 110 Sailors and Marines, while Shreveport saw 30, and Barnstable County two. Most of the victims suffered minor cuts and bruises, but at least 40 were admitted to ships’ hospitals because of major injuries such as concussions or damaged spleens. 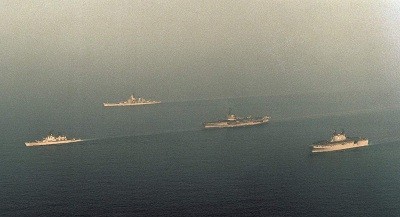 President George H. W. Bush met with South American leaders to discuss the worldwide blight of illicit narcotics trafficking, during a summit held at Barranquilla and Cartagena, Colombia (11–16 February 1990). The chief executive and his staff flew to the meetings on board three Sikorsky VH-60Ns of Marine Helicopter Squadron 1 that operated from Nassau. Following the summit, President Bush thanked the officers and men of Nassau, noting that they “played a critical role in the success of our trip.”

In the wake of the Iraqi invasion of Kuwait on 2 August 1990, a coalition that eventually comprised 29 nations initiated Operation Desert Shield: a UN sanctioned economic blockade of Iraq. After Iraqi leader Saddam Hussein refused to remove his forces from the invaded country, the coalition subsequently launched Operation Desert Storm: the liberation of the Kuwaitis from the Iraqis. Nassau, with elements of the Fourth Marine Expeditionary Brigade and Amphibious Group 2 embarked, deployed for these operations in what became the Persian Gulf War I (18 August 1990–20 April 1991). She passed through the Suez Canal into the Red Sea on 6 September, and on 14 September the ship arrived in the Gulf of Oman. President and Mrs. Bush held Thanksgiving service on board Nassau on 22 November. During the time leading up to the fighting, the ship took part in amphibious exercises Sea Soldier I–IV and Imminent Thunder.

Vice Adm. Stanley R. Arthur, Commander Seventh Fleet/Naval Forces Central Command, ordered amphibious diversions at Būbiyān and Faylakā Islands to delay the retreat of routed Iraqi troops from Kuwait City, on 26 February 1991. Marine helos flew from amphibious assault ships Guam (LPH-9), Iwo Jima (LPH-2), and Nassau, rendezvoused with Grumman A-6E Intruders and EA-6B Prowlers, and collectively strafed and bombed Iraqi troops dug-in on the islands. In the interim, most of the retreating Iraqi troops fled toward Basra along a highway in hundreds of military and civilian vehicles. The Iraqis moved through kill boxes assigned to carrier air wing (CVW) 2, embarked in aircraft carrier Ranger (CV-61). Aircraft dropped aerial mines to partially block the escape of the Iraqi troops, and journalists described what ensued as the “Highway of Death.” Some Iraqis panicked and drove off the road into the desert, only to become mired in the sand. Most of the Iraqis then dismounted and fled into the desert on foot, but air strikes killed up to several hundred of the enemy and destroyed an estimated 1,400 tanks, armored vehicles, jeeps, cars, buses, and tractor‑trailers.

Two or more Iraqi surface-to-air missiles shot down and killed Capt. Reginald C. Underwood, USMC, in an AV‑8B of VMA‑331, while he led a second section of four Harrier IIs from Nassau against Iraqi troops along the northern highway from Kuwait City, on 27 February 1991. Underwood became the final USMC aviator killed by direct enemy action in Gulf War I.

While Nassau deployed to the Sixth Fleet in the Mediterranean (1 December 2000–24 May 2001), she discovered a small boat adrift and sinking, in the western Mediterranean, at approximately 0300 on 20 December. The boat was designed to carry only seven passengers, but 30 people filled the craft. Nassau rescued 29 of the 30 castaways.

Hurricane Jeanne smashed into Haiti, killing more than 2,000 people and leaving 300,000 homeless, in September 2004. In February 2005, the annual Southern Command exercise Operation New Horizons focused upon relief efforts to the Haitians, and Nassau took part in the humanitarian relief operations (5–21 May 2005). The ship primarily returned 85 Navy Construction Battalion (Seabee) Sailors and Marines from their deployment to Haiti to Guantánamo Bay, Cuba, and Pascagoula. 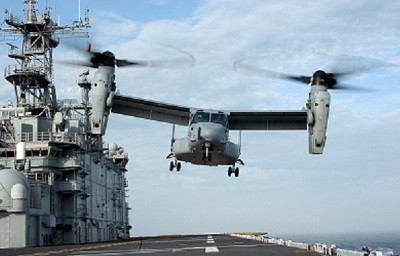