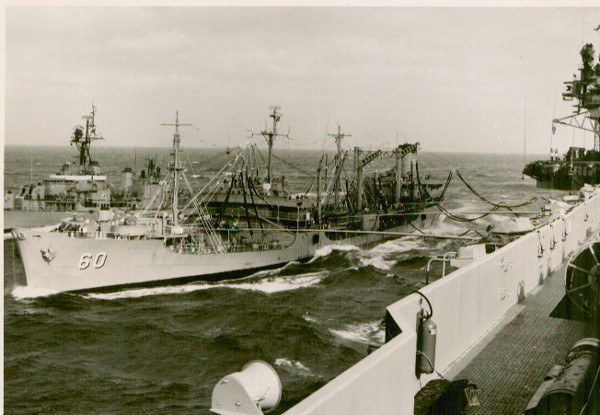 A river in western North Carolina.

The second Nantahala (AO60) was laid down under Maritime Commission contract (MC hull 726) on 31 October 1943 at Sparrows Point, Md., by the Bethlehem-Sparrows Point Shipyard, Inc.; launched on 29 April 1944; sponsored by Miss Mary Louise Reed; delivered to the Navy on 19 June 1944 and commissioned the same day, Comdr. Palmer M. Gunnell in command.

After shakedown in Chesapeake Bay, Nantahala departed Norfolk, Virginia, on 22 July 1944 for the Dutch West Indies where, after loading a cargo of fuel and diesel oil and aviation gasoline at Aruba, she steamed for fleet tanker duty in the Pacific. Sailing via Pearl Harbor, she reached Kwajalein on 25 August and served there as station tanker until heading for the Marianas on 2 September. She arrived at Guam on the 10th and during the remainder of the month deployed twice to replenish ships of the 3rd Fleet pounding Japanese positions from the Palaus to the Philippines.

Nantahala reached Ulithi, Western Carolines, on 1 October 1944 to continue station and at-sea logistic support for the Pacific Fleet. When not steaming with a replenishment group in the Western Pacific, she refueled and replenished ships at Ulithi. During the remainder of the war, she serviced as many as 16 ships a day at that important forward staging base. While anchored in Ulithi Lagoon on 20 November 1944, a Japanese submarine (either I-47 or I-36) fired Kaiten [suicide torpedoes] that struck Mississinewa (AO59), setting her afire. As burning oil and gasoline from the mortally wounded oiler spread to within 300 yards of her berth, Nantahala, her own tanks smothered by steam and carbon dioxide, got underway and shifted to a safer anchorage, leaving her boats behind to search for survivors. Nantahala’s motor launch struck a submerged object later that morning. The destroyer escort Lyman (DE-302) dropped a pattern of depth charges in those waters without result.

Between 21 October and 24 December 1944, Nantahala made four deployments in support of ships of the Fast Carrier Task Force. She operated with the replenishment tankers during the Battle off Cape Engano on 2526 October, and during November and December she ranged the Philippine Sea as carrier aircraft pounded enemy targets on Formosa and in the Philippines. During refueling operations in mid-December, she survived the great typhoon of 1718 December 1944, although winds, which she recorded at 124 knots, and heavy seas caused considerable topside damage, sweeping off the topping lift of her starboard amidships boom, wrenching off steel ladders, fueling-at-sea gear, and fire-fighting pumps, and destroying a motor launch.

Nantahala returned to Ulithi on 24 December 1944, and sailed on 3 January 1945 to support carrier operations in the South China Sea. While she refueled ships of the task force north and west of Luzon, American planes struck devastating blows at Japanese shipping and at enemy bases from Indochina to Formosa while supporting the invasion of Luzon at Lingayen Gulf. During operations off Luzon, Nantahala’s gyro compass failed early in the darkness of the mid watch on 10 January 1945 and she veered across the path of oiler Guadalupe (AO-32), which struck her, aft, between her screws and her rudder, flooding her steering room. The impact of the collision at 20°06'N, 121°34'E also opened a large hole in Guadalupe’s bow, but both ships managed to remain on station to complete their mission. During subsequent operations, Nantahala had a ringside seat on 12 January 1945 when combat air patrol fighters from escort carrier Nehenta Bay (CVE-74) splashed a Japanese floatplane.

After returning to Ulithi via Leyte Gulf on 21 January 1945 for repairs alongside repair ship Vestal (AR-4), Nantahala next made two refueling deployments from 8 February to 10 March in support of the invasion and capture of Iwo Jima. Thence, between 22 March and 31 May she took part in three replenishment missions to the Ryukyus where she helped maintain the mobility and striking power of American ships during the invasion and conquest of Okinawa.

After serving as station tanker in Leyte Gulf, Philippines, Nantahala departed Ulithi on 3 July 1945 for extended replenishment duty with the 3d Fleet. Assigned to the main replenishment group, she refueled carriers and escorts of TF 38 during the closing weeks of the war, a period in which American, and British, surface ships and carrier planes, pounded targets in the Japanese home islands from Hokkaido to the Inland Sea.

Enroute to Ulithi when offensive operations ceased on 15 August 1945, Nantahala resumed refueling operations off Japan the 27th. Between 8 and 16 September she serviced victorious ships of the Fleet at anchor in Tokyo Bay; thence, she sailed via Eniwetok for the United States, arriving at Seattle, Washington, on 10 November.

During the immediate postwar years, Nantahala conducted world-wide refueling and replenishment operations. She deployed to the Far East on 28 January 1946; and, until returning to San Pedro, Calif., on 26 March 1947, operated from the Marianas and Japan to the coast of China, the Philippines, and the Malay Peninsula and in addition carried oil from the Middle East to the Far East. Between 12 September and 20 November 1947, she cruised from the West Coast to the East Coast via the Middle East and Suez, and during the next years she deployed twice to the Mediterranean before returning to the West Coast on 23 October 1948. The far-ranging oiler made a seven-month deployment to the Far East in 1949. After returning to the West Coast on 22 October 1949, she decommissioned at San Diego on1 June 1950 and entered the Pacific Reserve Fleet.

Nantahala was recommissioned at Long Beach on 29 December 1950, Comdr. William S. Howell in command. Following a five-week run to the Far East and back she transited the Panama Canal on 3 April 1951 and carried fuel to the 6th Fleet in the Mediterranean. She arrived at Boston on 19 May and during the next ten months operated along the East Coast and in the Caribbean.

Between 3 March 1952 and 4 October 1961, Nantahala made eight deployments to the Mediterranean where she served with the 6th Fleet that varied in duration from three to seven months and encompassed the length and breadth of the Mediterranean. Prepared to replenish whenever called upon, she provided valuable support for peace-keeping operations by 6th Fleet. During the Suez Crisis in November 1956, she replenished 96 ships while serving as the only fleet oiler in the eastern Med. When not deployed with the 6th Fleet, she participated in U.S. or NATO exercises in the North Atlantic and refueled ships of the Atlantic Fleet while cruising from the coast of Western Europe to the coast of Brazil as well as to the Caribbean and along the eastern seaboard of the United States.

On 20 November 1961, Nantahala departed Norfolk for the Dominican Republic where she supported U.S. ships called in to protect the stability of that Caribbean nation’s government from possible overthrow by followers of the late dictator Rafael Trujillo. After returning to Norfolk the following month, she resumed replenishment duty off the West Indies in January 1962 in preparation for recovery operations following Col. John Glenn, USMC’s successful suborbital Mercury flight in Friendship 7 on 20 February.

During the next year and a half, Nantahala operated along the East Coast and in the Caribbean. While serving out of Guantanamo Bay in mid-February 1963, she took part in the search for and tracking of the Venezuelan freighter Anzoategui that had been seized by Cuban-oriented leftists off Santo Domingo. U.S. ships chased the hijacked ship to the coast of Brazil where she was captured by units of the Brazilian Navy. Later, Nantahala again replenished ships of the recovery force waiting to pick up Mercury astronaut Comdr. M. Scott Carpenter, USN, after his orbital flight on 24 May 1963.

Nantahala departed for the Mediterranean on 6 August 1963 for operations which lasted until late in the year. From 1963 until the end of her career a decade later, she maintained a pattern of Mediterranean deployments and alternated duty in the 6th Fleet with replenishment cruises and Atlantic Fleet exercises in the Atlantic and the Caribbean, as a unit of the Service Force, Atlantic Fleet. She supported Atlantic Fleet operations off the troubled Dominican Republic in the spring of 1965.

Stricken from the Naval Vessel Register on 1 July 1973, Nantahala was decommissioned at Melville, Rhode Island, on 2 July 1973. Although it was proposed to sell the ship to the government of Chile for use as an oil storage hulk, she was utilized for emergency fuel oil storage at the Naval Base, Philadelphia, Pa., subsequent to her striking. Transferred to the Maritime Administration on 5 March 1975, the ship was sold to Union Minerals and Alloys Corp., of New York City, on the same date. She departed the Inactive Ship Facility, Philadelphia, under tow of civilian tugs on the morning of 24 March 1975, and was broken up for scrap subsequently.