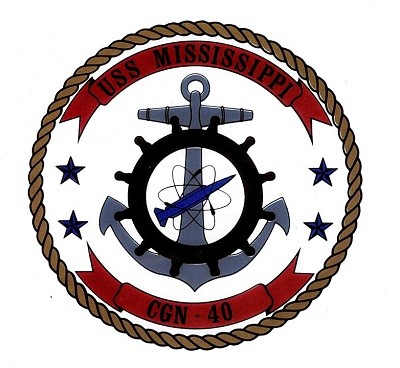 Caption: The crest incorporates the state colors: Red, white and blue, and the state motto "Virtute Et Armis" (by Valor and Arms). The four stars symbolize the four ships to bear the name Mississippi. The missile in the center represents the guided missiles with which the ship is armed, while the electron orbiting around the missile symbolizes the ship's nuclear propulsion. The ship's wheel and anchor are traditional symbols of those who serve at sea.

The first Mississippi was named for the Mississippi River; the succeeding ships for the 20th State, admitted to the Union on 10 December 1817.

Mississippi conducted her shakedown cruise to Caribbean and South American waters (8 January–13 February 1979), then made her first deployment, to the Sixth Fleet in the Mediterranean, (3 August 1981–12 February 1982) during a confrontation between the United States and Libya. She operated as part of the screen for aircraft carriers Nimitz (CVN-68) and Forrestal (CV-59) when two Libyan Sukhoi Su‑22 Fitter-Js threatened the task force (19 August 1981). Cmdr. Henry M. Kleeman and Lt. David J. Venlet, and Lieutenants Lawrence M. Muczynski and James Anderson, of Fighter Squadron (VF) 41, manned a pair of Grumman F‑14A Tomcats on a reconnaissance mission from Nimitz for a missile-firing exercise during freedom of navigation operations over international waters. The Libyans opened fire at the Tomcats and the F-14As shot down the Fitter-Js with AIM-9L Sidewinder air-to-air missiles. Mississippi fired three RIM-66B Standard SM-1 surface-to-air missiles during the exercise. 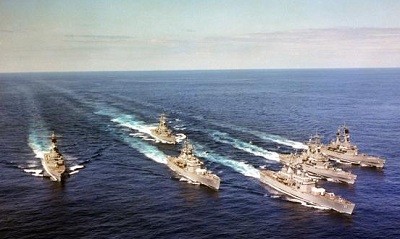 Arab terrorists in Beirut, Lebanon, kidnapped and hung Lt. Col. William R. Higgins, USMC, a member of the UN peacekeeping forces in Lebanon, and threatened to murder additional hostages they held (1 August 1989). Aircraft carrier America (CV 66) departed early from a visit to Singapore and made for the Arabian Sea, and Coral Sea (CV 43) steamed from Alexandria, Egypt, to the Eastern Mediterranean as a show of force. Mississippi had deployed as part of the Sixth Fleet’s Med 3-89 Battle Force and was visiting Haifa, Israel, when the crisis began. She emergency sortied and operated as the battle group’s Composite Warfare Coordinator for antisurface warfare off the Lebanese littoral throughout the remainder of the month. Midway (CV-41) had originally been scheduled to participate in Pacific Exercise-89, but sailed to fill a carrier commitment in the Indian Ocean, where she operated until mid-October.

Mississippi deployed with the John F. Kennedy (CV-67) Battle Group to the Mediterranean for Operations Desert Shield/Storm/Sabre, the liberation of the Kuwaitis from the Iraqis (16 August 1990–28 March 1991). She escorted ammunition ship Nitro (AE-21) through the Bab al Mandeb into the Gulf of Aden (18 January) and then made flank speed to her launch position in the Red Sea. Mississippi fired three BGM-109 Tomahawk Land Attack Missiles (TLAMs) at Iraqi strategic and military targets (25 January 1991) and two more the following day. The ship then operated as the local Antiair Warfare Screen commander for the Red Sea Battle Force (27 January–24 February).

Following the Haitian Army’s overthrow of President Jean-Bertrand Aristide (September 1991), a succession of governments led to sectarian violence. The UN authorized force to restore order and the U.S. initiated Operations Support Democracy and Uphold/Restore Democracy/Uphold Democracy for a peaceful entry into Haiti, and Restore Democracy in the event of resistance. Mississippi enforced the embargoes imposed upon Haiti as part of Support Democracy (14 July–3 August). The deteriorating situation then (12 September 1994) prompted the dispatch of a multinational force that included America (CV 66) and Dwight D. Eisenhower (CVN 69), about 1,800 soldiers of the Army’s XVIII Airborne Corps embarked on board Dwight D. Eisenhower. The Haitians agreed to allow the Americans to land peacefully, and (31 March 1995) the U.S. transferred peacekeeping functions to international forces. The crisis marked the first deployment operationally of Army helicopters on board a carrier in lieu of most of an air wing. 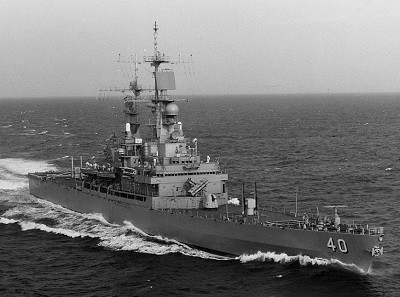 NATO and the UN carried out Operations: Provide Promise to provide humanitarian relief for people displaced by the fighting in former Yugoslavia (2 July 1992–9 January 1996); Deny Flight to monitor the air space over Bosnia-Herzegovina to prevent the warring parties from using their air strength (12 April 1993–21 December 1995); and Sharp Guard to enforce the arms embargo against the combatants (15 June 1993–2 October 1996). Mississippi served as Red Crown, coordinating air operations, in the Maverick Operating Area in the Adriatic Sea (2–18 April, 14–21 May, 11–21 June, 30 June–9 July, 22–27 July, and 22 August–6 September 1995). In addition, the cruiser intercepted Polish vessel Dajti, and her boarding team boarded and inspected the Eastern European ship as a possible smuggler (7 April).

Two Cuban Mikoyan Gurevich MiG-29UB Fulcrums shot down two Cessna 337 Skymasters flown by the “Brothers to the Rescue,” a non-profit organization opposed to the Cuban government of Fidel R. Castro, over contested international waters (24 February 1996). Mississippi led a surface action group that included guided missile cruiser Ticonderoga (CG 47) and guided missile frigate John L. Hall (FFG 32) during Operations Sentinel Lifeguard, Standoff IV, and Escort 1-96 in the Straits of Florida in response to the Cubans’ downing the Skymasters (25–28 February and 1–7 March). In addition, the group escorted a civilian flotilla that laid a wreath on the water where the victims fell. 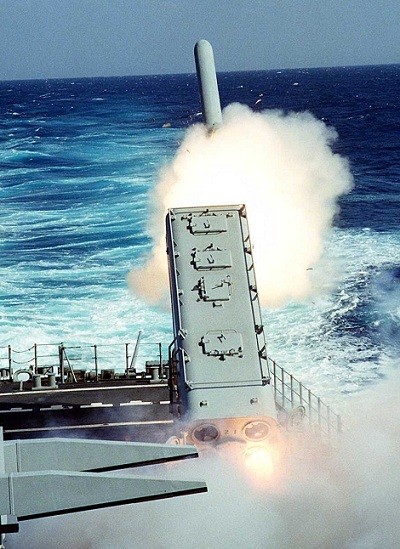