The Naval Academy’s Lucky Bag yearbook described McInerney: “Someone once said of Mac that he was as steady as a church-spire, but this is not correct; church-spires have been known to blow down or topple over, or otherwise deport themselves in an un-church-spire-like manner, but not so Mac. He’s just as steady and level headed as the day is long, and when you add to this an inexpressible fund of wholesome good humor and incurable optimism you have a thumbnail sketch of one of ‘21’s most likeable personalities.”

McInerney assumed command of destroyer Smith (DD-378) on 22 June 1940. At the outbreak of the Japanese onslaught across the Pacific on 7 December 1941, Smith operated with Destroyer Squadron (DesRon) 5 from San Francisco, Calif. She then escorted ships from the west coast to Pearl Harbor, T.H. On 1 February 1942, McInerney became the senior officer in destroyers attached to the ANZAC [Australian and New Zealand Army Corps] Squadron, a joint command of Australian, New Zealand, and U.S. ships in the South Pacific. In addition, he led DesRon 9 (24 March–2 August), and took part in the Battle of the Coral Sea and in the earlier fighting in the Solomons Islands. He led DesRon 2 (2 August–9 November), recovered from the fighting while temporarily serving with the Twelfth Naval District at San Francisco (15 December 1942–10 March 1943), and then took command of DesRon 21 on 10 March, breaking his flag in destroyer Nicholas (DD-449).

During the succeeding months he led his ships as they bombarded Japanese-held positions, escorted ships, and carried out antisubmarine sweeps. McInerney brought his destroyers through poorly chartered waters under cover of darkness to shell the Japanese troops on Kolombangara in the Solomon Islands, on 13 May. He afterward received the Bronze Star for “his courage and able seamanship,” contributing “materially to the successful mining of waters used extensively” by the Japanese.

McInerney commanded the squadron during the Battle of Kula Gulf (5–6 July). Rear Adm. Walden L. Ainsworth led Task Group (TG) 36.1, including DesRon 21, to bombard Kolombangara, Vila, and Bairoko Harbor, New Georgia in the Solomons. McInerney took his ships into the restricted and submarine-infested waters, and in the face of enemy gun and torpedo fire, shelled the Japanese shore batteries and installations, covering the amphibious landings of U.S. troops. The American ships also engaged a force of Japanese destroyers commanded by Rear Adm. Akiyama Teruo, shortly before midnight, and the Japanese sank destroyer Strong (DD-467).

Akiyama led a Japanese reinforcement force of seven destroyers, four of which (Amagiri, Hatsuyuki, Nagatsuki, and Satsuki) carried troops and supplies to Kolombangara, and Ainsworth clashed with Akiyama in the pre-dawn darkness. Japanese destroyers Suzukaze and Tanikaze sank light cruiser Helena (CL-50), but gunfire from a “Brooklyn-class light cruiser” (most likely light cruiser Honolulu (CL-48), sank enemy destroyer Niizuki. U.S. gunfire also damaged Nagatsuki, and her crewmen grounded and abandoned the ship on the southeastern coast of Kolombangara. American shells damaged additional enemy ships before they came about and escaped. In the wake of the battle, Amagiri and Hatsuyuki interrupted McInerney while he directed destroyers Nicholas and Radford (DD-446) to rescue some of Helena's survivors. McInerney resolutely stood by the survivors while the Japanese attacked on three separate occasions, and subsequently received the Navy Cross for his “courageous and gallant conduct” while rescuing the men from the water. One week later, he commanded the destroyers that rescued additional Helena survivors from ashore on Vella Lavella.

McInerney became the representative for Commander Destroyers in the South Pacific in August, and in March 1944, he became the chief of staff for Commander Operational Training Command, Pacific Fleet. McInerney assumed command of battleship Washington (BB-56) at Leyte, Philippines, on 5 June 1945. Washington had just completed an almost ceaseless slate of operations, and on the following day, McInerney sailed her toward the west coast, making stops at Guam and Pearl Harbor before reaching Puget Sound Navy Yard, Bremerton, Wash., on 23 June. The ship’s final wartime refit carried her through the Japanese surrender. 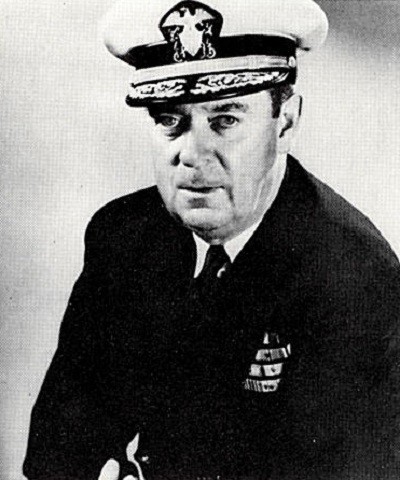 He served at the Receiving Station at San Francisco (October 1946–January 1948), and then commanded Light Cruiser Division Pacific through January 1950. McInerney led Amphibious Training Command Pacific (January 1950–October 1951), followed by Amphibious Group III (October 1951–March 1953). He served as the senior member of the Board of Inspection and Survey (March 1953–October 1954), and as the president of the General Courts Martial, Eleventh Naval District (October 1954–June 1955). He was placed on the retired list with the rank of vice admiral on 30 June 1955. McInerney died on 24 June 1956 in San Francisco. 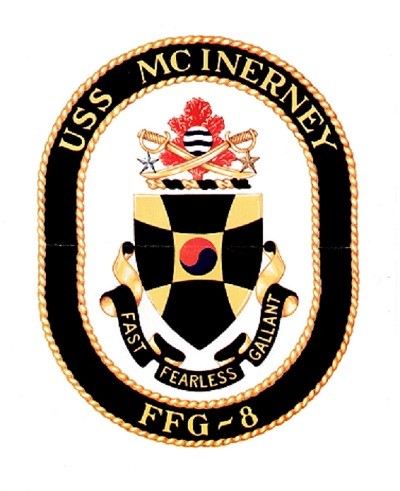 The shield’s dark blue and gold colors, traditionally associated with the Navy, represent the sea and excellence, respectively. The dark blue cross refers to the award of the Navy Cross, and in conjunction with the Taeguk, alludes to the medal of the Military Order of the Taeguk given by the Republic of Korea for McInerney’s services to that Republic during the Korean War.

The crest’s coral and fountain (a heraldic symbol for water) refer to the Battle of the Coral Sea in World War II. McInerney led the destroyers of ANZAC [Australian and New Zealand Army Corps] Force during that decisive battle that turned back the Japanese thrust toward Port Moresby, New Guinea. The two swords are adapted from the surface warfare insignia, and refer to both the fighting nature of a guided missile frigate and to McInerney’s distinguished naval service. The two stars, representing the awards of the Silver Star and the Bronze Star Medals, further symbolize the continued excellence, and McInerney’s achievements during his career.

A Sikorsky SH-60B LAMPS III Seahawk worked with the Recovery Assist, Securing and Traversing System (RAST) on board a ship underway for the first time, when McInerney maintained electronic communications, though not an actual landing of the Seahawk, from Bath Iron Works, on 11 November 1980. Designers intended RAST to be able to recover helos in seas with ship movements of up to 28 degree rolls, five degrees of pitch, and while heaving 15 feet per second. LAMPS III went to sea for the first time when a Seahawk landed on board McInerney by using RAST, off the northeastern coast of Florida, on 6 January 1981.

A Lockheed P-3C Orion from Patrol Squadron (VP) 26 collaborated with McInerney, with Coast Guard Law Enforcement Detachment 404 embarked, in the seizure of a 59-foot semi-submersible vessel smuggling an estimated $107 million worth of cocaine about 350 miles west of Guatemala, on 13 September 2008. The smugglers attempted to escape and jettison the cocaine, but U.S. boarders captured the vessel before the traffickers scuttled the submersible. The borders evaluated that the vessel was capable of smuggling narcotics from Ecuador to San Diego, Calif. 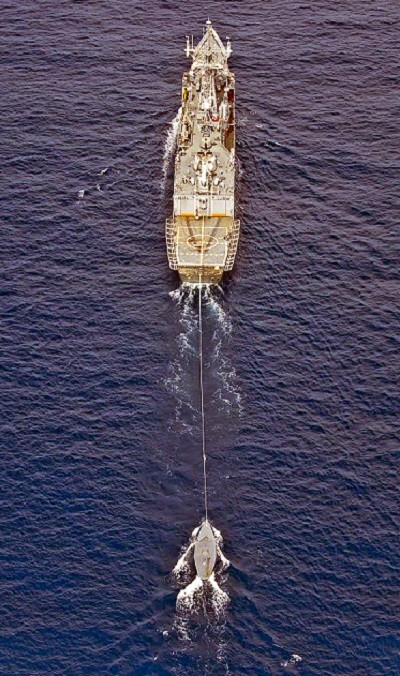 McInerney, with Helicopter Antisubmarine Squadron (HSL) 42 Detachment 7 embarked, made a counter-narcotics cruise to the Caribbean (5 October 2009–15 April 2010). N-8 and N-9, two Northrop Grumman MQ-8B Fire Scouts (BuNos 167791 and 167792), respectively, made the first deployment of the unmanned aerial systems during the voyage. In addition, McInerney accomplished the first interception of drug smugglers utilizing Fire Scouts, on 3 April 2010. The Fire Scout filmed the smugglers' activities on board their go-fast in the Eastern Pacific. The frigate seized the boat and 132-pounds of cocaine, and compelled the traffickers to jettison an estimated 440-pounds of the illicit cargo. The Fire Scouts accomplished a total of 24 counter-narcotics and systems evaluation flights during their deployment.

Decommissioned at Mayport on 31 August 2010, McInerney was subsequently transferred to the Pakistani Navy, which recommissioned her as Alamgir (FFG.260).