A city in southern California.

The design for the boat’s insignia was chosen from a number of drawings submitted by high school students of Los Angeles, Calif. Sandra Higashi’s design depicts the history of the previous ships named Los Angeles and exemplifies the characteristics of attack submarine Los Angeles (SSN-688). Each of the porpoises represents one of the vessels bearing the name Los Angeles. Porpoises were chosen because they represent speed, grace, and endurance. Porpoises or “dolphins,” as they are sometimes labeled, are symbolic of a calm sea and traditionally called a “Sailor’s friend.” 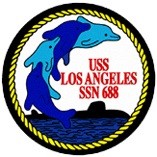 After a brief visit to Cape Canaveral, Fla. (31 January–6 February), Los Angeles completed Sound Trials at Exuma Sound, Bahamas (6–18 February and 20–28 February). She participated in antisubmarine exercise SubASWEx 1-77 (1–10 March), and entered Norfolk Naval Shipyard for a restricted availability. Los Angeles then sailed to St. Croix, Virgin Islands, for standardization trials. Los Angeles began pre-deployment training (PDT) in May, and hosted a visit by William J. Perry, Assistant Secretary of Defense for Research and Engineering, and Under Secretary of the Navy Robert J. Woolsey.

President James E. “Jimmy” Carter Jr., and First Lady E. Rosalynn Carter, embarked on board Los Angeles for a day, on 27 May 1977. Vice Adm. Hyman G. Rickover, Assistant Chief of the Bureau of Ships for Nuclear Propulsion, invited the chief executive and his wife for the sail, and Vice Adm. Joseph Williams, Jr., Commander Submarine Force, Atlantic, also embarked. President and Mrs. Carter interrupted their Memorial Day weekend retreat at St. Simons Island, Ga., and they flew on board Air Force One from Brunswick, Ga., to Cape Canaveral, and then boarded the boat. A reporter asked President Carter, a submarine veteran, if he ever suffered from claustrophobia, and the chief executive quipped: “Only when you news people are around.” He continued to display his sense of humor when another person asked him if he would take the helm of the submarine. “Oh, I think so,” he replied. “They’ve got some automatic devices to prevent serious errors.”

A reporter further described the chief executive, who donned a beige windbreaker in place of his grey suit coat, as “in a buoyant mood” while he enjoyed the light air and sunny sky. The President and First Lady stood atop Los Angeles’ high sail while two tugs eased her from the pier at 0915. The Navy banned representatives of the media from embarking for security reasons, but a contingent of reporters and photographers chartered a civilian hovercraft and followed Los Angeles until she dove at 1155. The Navy did rent space on board a helicopter for 12 journalists to record the voyage from the air.

Rickover briefed the visitors on the status of the Navy’s nuclear submarine program while they relaxed in the wardroom. President Carter operated the fair weather planes at one point, and the First Lady briefly took over the stern planes. Los Angeles kept in touch with destroyer Arthur W. Radford (DD-968) via an elaborate communications system, including the Moscow-Washington “Hot Line,” in order to ensure an uninterrupted executive chain of command. Arthur W. Radford also conducted air, surface, and sub-surface surveillance of the surrounding waters. The destroyer rendezvoused with the submarine prior to her initial dive, and then again when the boat surfaced. Los Angeles sailed about 45 miles into the Atlantic before she came about and returned her passengers to land, shortly before 1800. The chief executive stepped ashore wearing a black baseball cap with gold braid on the bill and the inscription “Commander in Chief Jimmy Carter.”

President Carter personally wrote Cmdr. Christensen and thanked him for the “cruise on what is very likely the finest ship in the world. I was proud of your performance, which strengthened my confidence in the Submarine Force.” 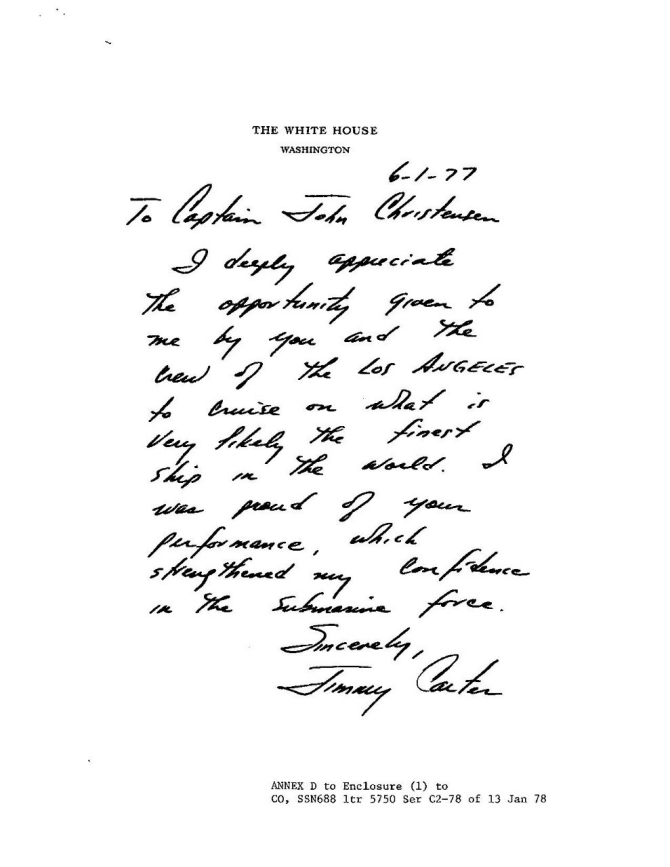 Los Angeles sailed from Norfolk to change her home port to Pearl Harbor, Hi. (18 May–17 June 1978, effective on 17 June). She transited the Panama Canal on 23 May, visited San Diego, Calif., on 30 May, and then embarked Mayor Thomas J. Bradley of Los Angeles, prior to visiting Long Beach, Calif. (1–5 June). Los Angeles reached Pearl Harbor on 17 June, and shifted to Submarine Squadron 7. She spent the remainder of the year involved in several exercises including: PacSubASWEx 1-78 (12–28 July) and PacSubASWEx 2-78 (29 August and 18–31 October); Mk 48 torpedo proficiency training (15–18 August); MidPac operations (3–15 November), and services for attack submarine Sargo (SSN-583) (27 November–4 December).

The boat alternated in port and at sea periods as she prepared for her upcoming deployment. Los Angeles completed an ORSE (3–5 January 1979), and accomplished multiple installations and upgrades to her weapons systems. She deployed to the Western Pacific (5 March–2 August 1979). The submarine participated in several operations including: TransitEx 3-79 (5–12 March); EncounterEx with the ships of Destroyer Squadron (DesRon) 33 (30 March–1 April); MultiplEx 4-79 (8–10 June); MultiplEx 5-79 (15–17 June); and a Seventh Fleet antisubmarine exercise (2–5 July).

While Los Angeles accomplished post-availability sea trials, she received notification that she would make an unscheduled deployment to the Western Pacific under the “Ready SSN” concept. She consequently sailed on a high speed transit across the Pacific and conducted independent submarine operations (11 January–25 April 1980). Los Angeles visited Perth, Australia (1–6 April). She came about for Guam to complete ORSE, and then made for Pearl Harbor.

Los Angeles deployed to the Western Pacific (15 November 1982–14 May 1983). She participated in multiple operations including Team Spirit/Valiant FlEx 83 (27 February–25 March) and FleetEx 83-1 (3 April–5 May). The submarine visited several ports including: Diego Garcia (12 January), where she again moored alongside destroyer tender Samuel Gompers; Perth (20–25 January); Agana (4–24 February), where she moored alongside submarine tender Proteus (AS 19); and Yokosuka (26 March–2 April).

She spent considerable time underway in the local operating areas in the New Year (January–February 1988). During this period she also completed an ORSE. Los Angeles entered Competent for an SRA (1 March–10 May 1988). She then completed sea trials (8–16 July) and acoustic trials (1–3 August), as well as additional training. 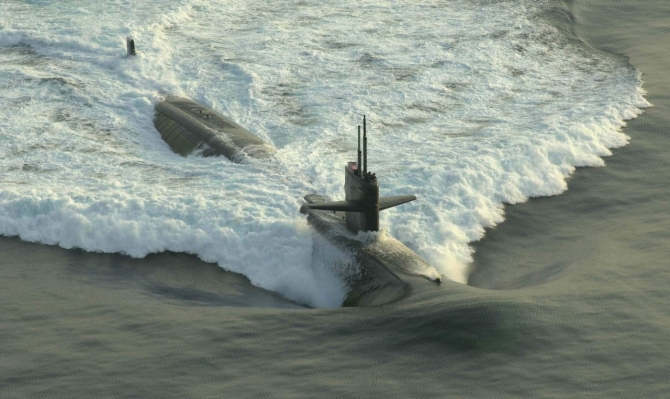 Los Angeles participated in RimPac-90 and an ORSE (25 April–13 May 1990), followed by an SRA at Pearl Harbor (18 July–21 October). Cmdr. Michael S. Myers relieved Cmdr. Eldridge as the commanding officer on 23 May 1990. Los Angeles took part in RimPac-92 (7–23 July 1992), and then carried out an engineering refueling overhaul at Mare Island Naval Shipyard, Vallejo, Calif. (7 August 1992–12 March 1995). She spent most of the overhaul within Dry Dock No. 2. Cmdr. John S. Boulden, III, relieved Cmdr. Myers as the commanding officer on 2 March 1993. Los Angeles accomplished sea trials on several occasions following her overhaul, sometimes in conjunction with training (24–25 February [an electrical hull fitting suffered a leak that compelled her to come about for repairs at Alameda], 26 February–4 March, 31 July–18 August, and 9–21 November 1995).

During an SRA (7 January–5 June 1998) the attack submarine was modified for a Drydock Shelter configuration, an array of air, water, and hydraulic systems that enabled her to employ a Sea, Air, Land (SEAL) Delivery Vehicle. She was subsequently fitted with the shelter (27 October–10 December 1998 and 1–8 January 1999), and then completed her Drydock Shelter sea trials (15–26 January). Cmdr. Mark D. Jenkins relieved Cmdr. Rubenstein as the commanding officer on 11 December 1998.

Los Angeles deployed to the Western Pacific (6 November 2004–6 May 2005). She then accomplished a pre-inactivation restricted availability at Groton (1 January–22 July 2006). Scanning equipment in Electric Boat’s Groton mail room gave a false positive reading to a batch of mail, including correspondence en route to Los Angeles, at about 0915 on 2 February 2006. Testing did not reveal hazardous substances, and the mail resumed. The submarine carried out two separate sea trials following her availability.

Seven sailors practiced locking out from Los Angeles during exercise EscapeEx at the Southeast Alaska Acoustic Measurement Facility off Ketchikan, Alaska, on 2 December. The submarine sailed to the area (30 November–2 December), and then descended to a depth of 130 feet. The sailors dressed in Mk 10 Submarine Escape Immersion Equipment, special suits designed to enable a free ascent from a stricken submarine, entered her escape trunk, and ascended to the surface. Cmdr. Erik A. Burian assumed command of the boat in July 2006.

Los Angeles celebrated the 30th anniversary of her commissioning on 13 November 2006. The attack submarine visited her namesake city when she berthed at the Port of Los Angeles at San Pedro, Calif. (7–12 December). The oldest attack boat in commission traditionally carries Rear Adm. Richard H. O’Kane’s cribbage board in her wardroom. O’Kane received the Medal of Honor for his daring attacks on two Japanese convoys while in command of submarine Tang (SS-306) during her fifth and final patrol in 1944. The Japanese subsequently captured O’Kane and held him captive through the end of World War II. Los Angeles therefore carried O’Kane’s board when she next deployed to the Western Pacific (8 May–8 November 2007). The boat visited Guam (21–23 and 28–29 May, 31 May–4 June, 18–25 July, 30 July–4 August, 15–22 August, and 11–16 October); Sasebo (11–25 September); and Yokosuka (24–29 October).

Los Angeles, operating with Submarine Squadron 1, held a decommissioning ceremony in her namesake city on 23 January 2010, and was decommissioned on 4 February 2011. Los Angeles passed O’Kane’s cribbage board to attack submarine Bremerton (SSN-698). She subsequently underwent preparation for disposal while at Puget Sound Naval Shipyard, Bremerton, Wash.

Los Angeles is eligible for listing in the National Register of Historic Places.