Robert Lawrence Leopold was born in Louisville, Jefferson County, Kentucky, on 11 November 1916 to Lawrence S. and Irma (Schwabacher) Leopold. He came from a Jewish family and his parents were active in Democratic politics in the area. He attended Louisville Male High School, and graduated from that institution in 1934, then went on to attend college at the University of Louisville where he earned a Bachelor of Arts in 1938 and a Bachelor of Laws (LLB) in 1940. As an undergraduate, Leopold played football his freshman year and served in several student organizations, that included being President of the Student Council of the College of Liberal Arts, Research Supervisor of the law school’s Briefing Service, and membership in the Phi Alpha Delta Law Fraternity, an honor council for the university’s law school. He also became a member of the Kentucky State Bar Association and the American Bar Association (Jr. Conference).

On 10 July 1940, just a few months after completing his LLB, Leopold enlisted at Louisville in the U.S. Navy Reserve (USNR) as an apprentice seaman. From 19 August to 13 September, he participated in active duty training on board the demilitarized training battleship Wyoming (BB-32), operating primarily off the Atlantic seaboard. On 15 September, his enlistment was terminated under honorable conditions and the following day he was appointed midshipman, USNR. He then attended training at the U.S. Naval Reserve Midshipman’s School, Abbott Hall, Northwestern University, Evanston, Illinois; he received promotion to the rank of ensign D-V (G) (officer of the Volunteer Reserve to the line for general service in deck duties) on 12 December 1940. 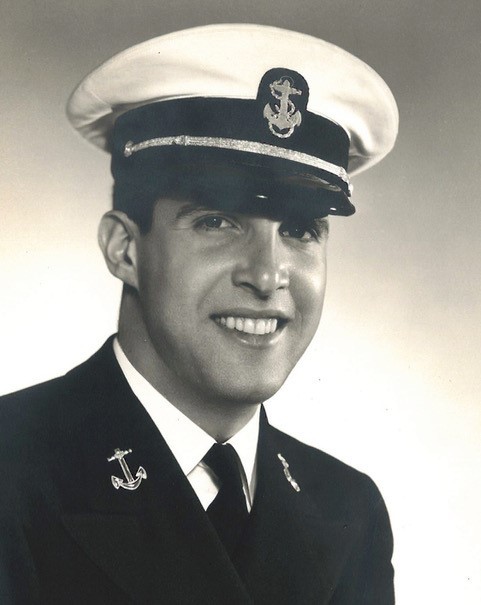 Just a few weeks later, on 28 December 1940, Ens. Leopold reported for active duty on board the battleship Arizona (BB-39) serving as a communications watch officer. When Leopold reported on board the battleship she was undergoing modernization at the Puget Sound Navy Yard, Bremerton, Wash. On 3 February 1941, Arizona voyaged to Pearl Harbor, T.H., where she had been stationed prior to her overhaul. In company with fellow battleships Nevada (BB-36) and Oklahoma (BB-37), Arizona conducted training exercises in Hawaiian waters throughout much of the year.

On 5 December 1941, Arizona, Nevada and Oklahoma moored alongside Ford Island, T.H., after having concluded exercises at sea. The following morning, Arizona took the repair ship Vestal (AR-1) alongside to port to receive a scheduled tender availability. Just before 0800, on 7 December 1941, aircraft from a Japanese fleet carrier group executed a devastating attack against the U.S. Pacific Fleet and naval and military bases in their proximity. During the attack the battleship took two direct bomb hits, one of which penetrated the deck and exploded in the black powder magazine which, in turn, set off adjacent magazines. The forward part of the ship experienced a devastating explosion that spawned fires so fierce that they burned for nearly two days afterwards. Ens. Leopold, Adm. Isaac C. Kidd (Commander Battleship Division 1), Capt. Franklin van Valkenburgh (Arizona’s Commanding Officer) and 1,177 officers and men lost their lives during the attack.

Ens. Leopold lies buried with his shipmates at Honolulu Memorial Cemetery of the Pacific, Pearl Harbor, Honolulu County, Hawaii; the U.S.S. Arizona Memorial. For his sacrifice, he was posthumously awarded a Purple Heart and is entitled to the American Defense Service Medal and the World War II Victory Medal.

Leopold (DE-319) was laid down on 24 March 1943 at Orange, Texas, by Consolidated Steel Corporation; launched on 12 June 1943 and sponsored by Miss Helen S. Leopold, the sister of Ens. Leopold. 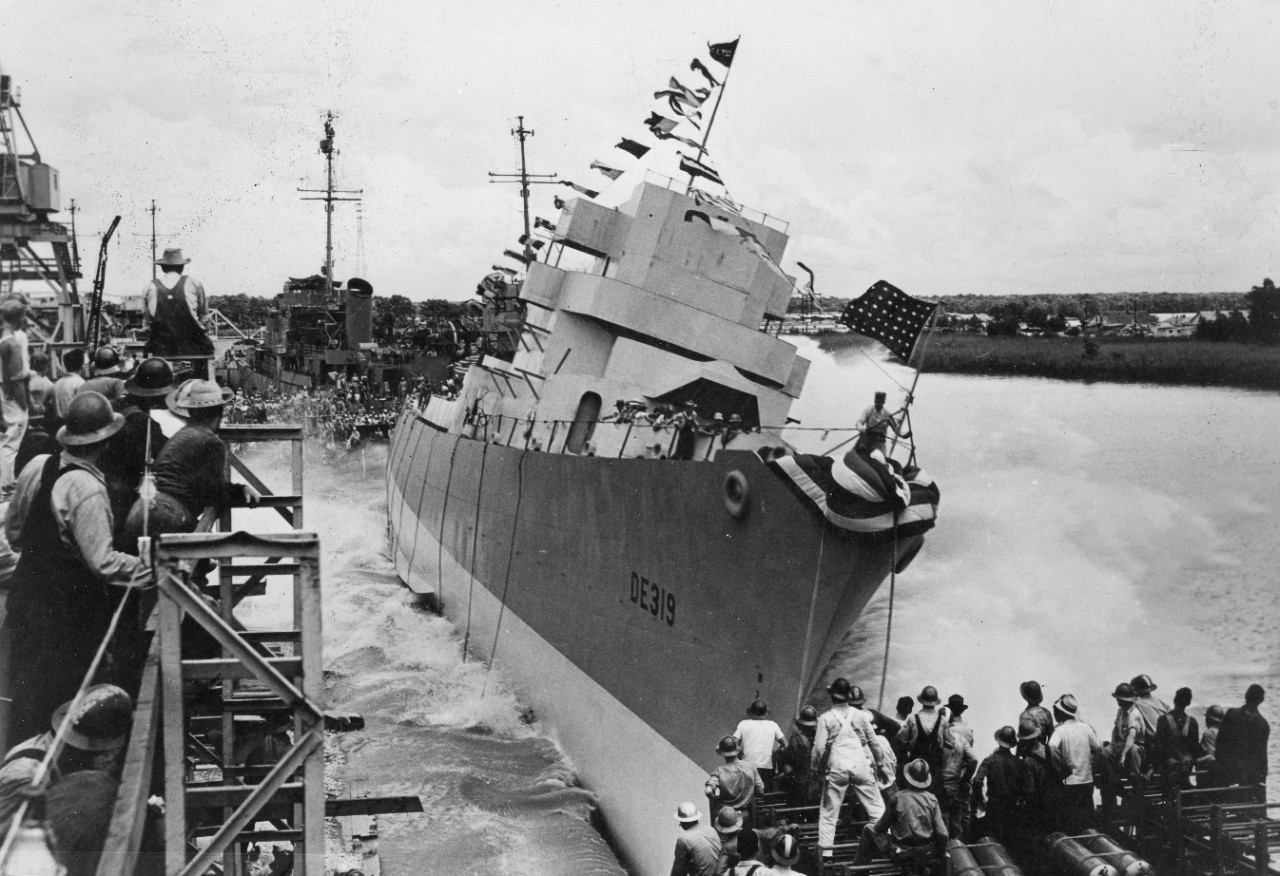 Caption: While those on board hang on for the ship’s entry into the water, Leopold slides down the ways as workmen, in the foreground and elsewhere in the vicinity, pause momentarily to see another one of the fruits of their labors begin her journey to take the war to the Axis. (U.S. Navy Photograph 80-G-74240, National Archives and Records Administration, Still Pictures Division, College Park, Md.)

Commissioned on 18 October 1943 at Orange, Lt. Cmdr. Kenneth C. Phillips, USCG, in command, Leopold cleared her building yard on the evening of 21 October and steamed to the Navy Quarantine Base at Sabine Pass, Texas. The following day, she conducted structural firing tests and then moored at Galveston, Texas. On the 23rd, she went into dry dock at Galveston and remained there through the 28th. Just a few hours after leaving the dock Leopold went to the Naval Station at Algiers, New Orleans, Louisiana, mooring there on 30th. Early the next morning she steamed to the Naval Training Station at New Orleans and anchored in the waters there on evening of the 31st.

While at New Orleans, Leopold underwent compass adjustment and calibrated her radio direction finder. On 5 November 1943, Leopold steamed to the U.S. Naval Section Base at Burrwood, La., to make the final preparations for her shakedown. Two days later on 7 November, she got underway with the escort ship Kirkpatrick (DE-318) and shaped a course for Great Sound, Bermuda, British West Indies; where she arrived without incident on the 11th. Shortly after her arrival, Leopold began a month of intensive shakedown exercises, which included training in screening, fire control, and anti-submarine warfare.

Leopold wrapped up her shakedown in the first week of December 1943, getting underway from Great Sound with Kirkpatrick on the 9th and heading back to the East Coast. The escort ship arrived at the Charleston Navy Yard, S.C., on 11 December and then underwent post-shakedown repairs. On the 19th Leopold made her way to the Norfolk Navy Yard, Portsmouth, Va., and remained moored there for several days in preparation for an upcoming voyage. She got underway from Norfolk on the 20th and steamed to the area near York Spit Light, to conduct exercises, where she remained through 23 December awaiting the formation of a convoy. On the 24th Leopold stood out of Thimble Shoal Channel and joined Escort Division 22 (CortDiv 22), as part of Task Force (TF) 61, escorting convoy USG 68 across the Atlantic.

Late on the night of 30 December 1943, amid rough seas, Leopold dropped back to the rear of USG 68 to search for a sailor who had fallen overboard from ship No. 34. Despite the inclement weather and darkness, the escort vessel kept up the search for over four hours, but unfortunately, never recovered the lost seaman. A few weeks later, on 11 January 1944, Leopold arrived at Casablanca, French Morocco, and moored in the harbor.

On 13 January 1944, Leopold departed Casablanca as the ninth ship, in a nine-ship column of TF 61 vessels, bound for the Straits of Gibraltar. Once in the area, she conducted anti-submarine patrols off the Straits for the better part of a week while awaiting the arrival of a convoy bound for the U.S. Leopold joined with GUS 27 on 16 January and began the voyage to the East Coast, eventually arriving at the New York Navy Yard, Brooklyn, N.Y., on 5 February. Upon her arrival at New York the escort, ship underwent voyage repairs and had an availability.

With repairs complete, Leopold steamed out of New York on 15 February 1944, and made her way to New London, Conn., briefly stopping by Gravesend Bay on the way to top off her ammunition. On the 16th, the escort ship arrived at Montauk Point and conducted training exercises for the next two days. On 18 February, Leopold proceeded to Casco Bay, Maine, via the Cape Cod Canal, and arrived there the following morning. Once at Casco Bay, the escort ship began a series of gunnery and anti-submarine exercises in company with, Poole (DE-151), Kirkpatrick and Joyce (DE-317). The group of warships departed Casco Bay by way of the Cape Cod Canal on 26 February, and Leopold at last arrived in New York on the 27th where she moored to the south side of the 35th Street Pier, Brooklyn.

Ready for sea again on 1 March 1944, Leopold unmoored and proceeded to Sandy Hook in order to join company with CortDiv 22, charged with guarding fast convoys voyaging between the U.S. and the United Kingdom. CortDiv 22 formed in the early afternoon and included Poole, as the division flagship, as well as Peterson (DE-152), Harveson (DE-316), Joyce, Kirkpatrick and Leopold. Shortly after joining company with the flotilla, Leopold and the other escort vessels assumed their stations screening the twenty-seven ships of convoy CU 16 steaming across the North Atlantic.

Fair winds and following seas, attended by little to no excitement, marked the first week of Leopold’s voyage with CU 16. Then, on 8 March 1944, an intercepted German transmission indicated a possible U-boat wolfpack operating within100 miles of the convoy. In response to the potential threat, Leopold made her way to a predicted intercept point, and took up a screening station near the front of the convoy.

Things remained quiet well into the next day as the convoy began passing through and area known as “torpedo junction.” As night fell on 9 March 1944, Leopold remained undisturbed, positioned in a screening station roughly 6,700 yards forward of the convoy guide. Then, at 1950, amid high seas and noticeable swells, Leopold made radar contact with a German submarine estimated to be roughly 8,000 yards distant. Leopold’s crew rushed to their battle stations and the ship went on all boilers in order to close on the contact at high speed. Leopold quickly came within range of an only partially submerged submarine and her 3-inch and 20-millimeter gun crews opened fire. Despite releasing a flare, the crews essentially worked blind as they attempted to target the enemy boat.

At 1959, as Leopold’s gun crews fired into the darkness, the whole ship suddenly and violently convulsed as an acoustic torpedo, fired from U-255 (Oberleutnant zur See Erich Harms in command), exploded near “frame 8,” of the ship. As one of the ship’s crew, S1c Troy S. Cowers, USCG, later recalled, “when the fish exploded, I was blown right out of my shoes and into a life net a dozen feet away.” The explosion destroyed Leopold’s underwater structure below the main deck, leaving her dead in the water. In the succeeding minutes, she broke in two and her bow section eventually capsized, with her stern remaining afloat. Leopold sank in 1,300 fathoms of water, some 522 miles from Iceland at the approximate location of 58°36'N, 25°57'W.

As Leopold sank into the icy waters, which were estimated to have been roughly 47 degrees Fahrenheit that night, the ordeal of her surviving crewmembers had only just begun. S1c Richard R. Navotyn, USCG, reflected, “I don’t even remember the explosion, one second I was at my battle station and the next I came to in the water, swimming toward a life raft.” Amid mountainous waves of freezing water, those who found themselves still alive clung to life nets or what rafts they could find.

Only moments after Leopold’s fatal explosion Joyce arrived in the area to begin rescue operations, but quickly found her efforts hindered by the presence of an enemy submarine. At 2028, she conducted an emergency turn to avoid a torpedo, and although by no means insensitive to the dire condition of the men in the water, she began the necessary process of searching for the enemy submarine. In an effort to provide Leopold’s survivors with some hope Lt. Cmdr. Robert Wilcox, USCG, Joyce’s commanding officer, called out on a megaphone, “We’re dodging torpedoes… God bless you. We’ll be back!”

As Joyce hunted the lingering submarine menace the men in the water spent nearly eight hours adrift, many giving “up their will to live,” as they battled the freezing temperatures. Seaman William G. O’Brien, USCG, remembered, “We slapped each other’s faces and swung our arms… some were just sitting, feeling sleepier and sleepier and they froze to death.” For many of the survivors those harrowing hours in North Atlantic waters remained etched in their memories, “It’s hard to talk about things like that,” recollected O’Brien, “but we were mighty proud of our destroyer escort ship, the Leopold.”

Joyce, assisted by Allied aircraft based in Iceland, eventually resumed rescue operations. In all, 28 sailors were pulled out of the water alive, but 171 others, including Lt. Cmdr. Phillips, and all the ship’s officers perished. At 0045 on 10 March 1944, Joyce scuttled Leopold’s stern section using gunfire and depth charges. With the rescue operation complete, Joyce transported Leopold’s 28 surviving sailors to Ireland.

Leopold was stricken from the Naval Vessel Register on 25 March 1944.