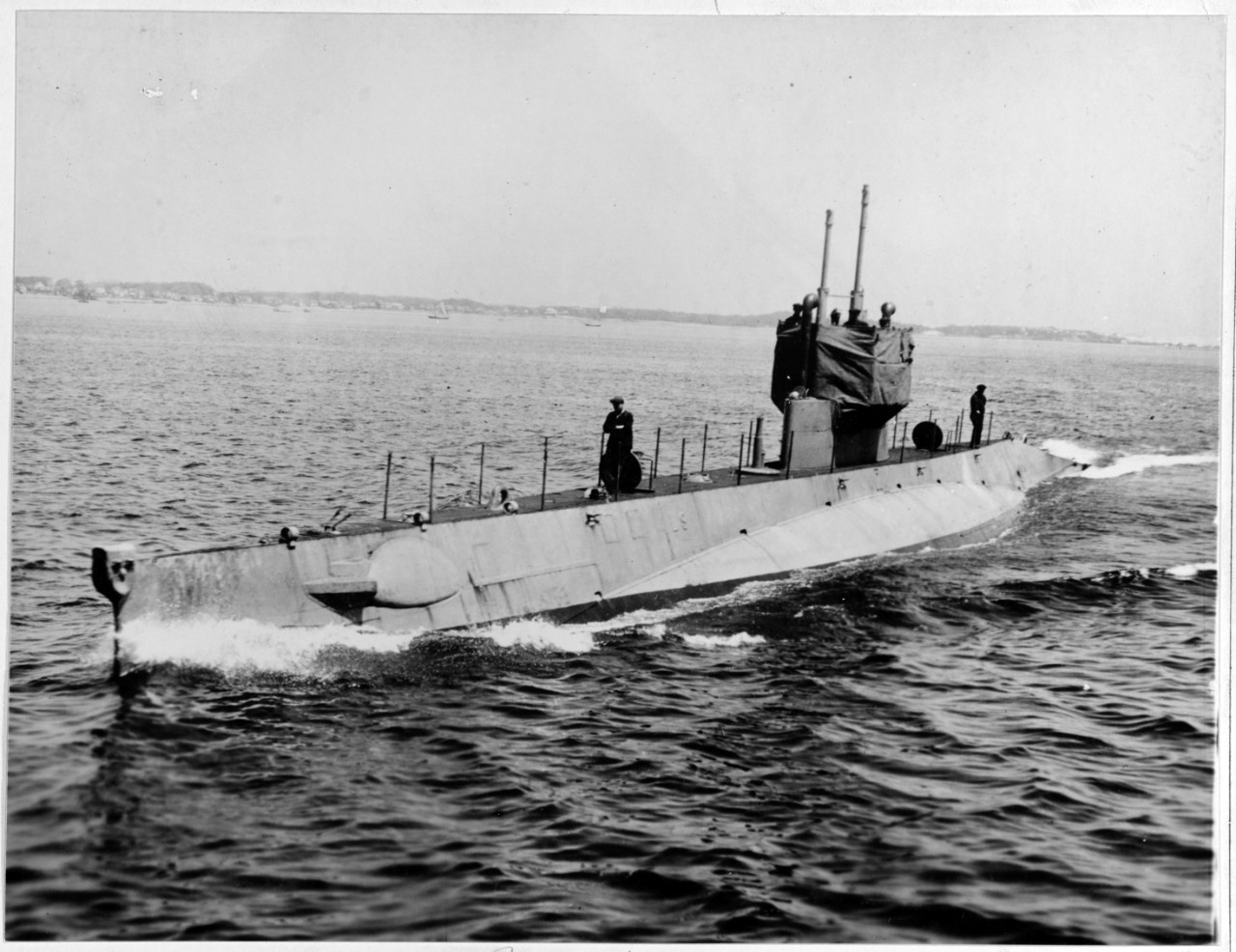 The day following her commissioning, on 5 August, L-9 was assigned to Division Six, Submarine Flotilla, Atlantic Fleet, and her commander was ordered to report to the Commander, Submarine Force on board the monitor Ozark (Monitor No. 7) at the Boston Navy Yard. L-9 initially operated in the waters off New England conducting shakedown. By December, she had moved to the Norfolk Navy Yard, Portsmouth, Va., to undergo preparations for her cruise to Florida and annual fleet exercises in Cuban waters. She departed Norfolk on 18 December and arrived at Key West, Fla., on 23 December. After liberty for the Christmas holidays, she underwent preparation and tests based from Key West. On 30 December, she underwent overhaul for a damaged starboard engine. L-9 was to undergo trials at Pensacola, Fla., along with L-10 and L-11 (Submarine No. 51) and Rowan (Destroyer No. 64) on 1 February 1917.

As a result of heightened tensions with Imperial Germany over the latter’s resumption of unrestricted submarine warfare on 1 February 1917, most of the Atlantic Fleet had consolidated in the sheltered waters of the lower Chesapeake Bay by 31 March. L-9 departed Pensacola on 1 April and made her way via Key West to the Norfolk Navy Yard. While L-9 was en route, the U.S. declared war against Germany on 6 April and entered World War I. The submarine lay at the Norfolk Navy Yard on 7 April, and the next day shifted to Hampton Roads, Va. Two days later, on 10 April, she departed bound for Submarine Base, New London, Conn. Arriving on the 12th, she commenced transferring submarine equipment to the base from Ozark. This was completed the following day and after the division flag transferred to L-9, Ozark got underway. L-9 began overhaul on the 14th, but complete overhaul was postponed. She continued to be based at New London until 6 May, when she departed. Bound for the Boston Navy Yard, she arrived on 8 May and was based from the Navy Yard (8 May–30 June). Though she was sent to Boston, ostensibly for overhaul, she was engaged in experimental work off Nahant, Mass. Though her engines badly needed repairs, she was towed out to Nahant by a tug while machinists worked on her engines. Despite these exercises, she was not considered operational until her overhaul could be completed. As that work was being undertaken, L-9 received orders transferring her from Division Six to Division Five.

L-9 completed her yard work and undocked on 16 October 1917. She was, however to remain at the Boston Navy Yard until all repairs and alterations recommended by the Trial Board were completed. It was also noted that the boat “should be given to fire all torpedoes and to standardize over a measured mile at low speeds submerged.” On 28 October, she was directed to proceed via the Cape Cod Canal to Newport, R.I., in company with L-10 (Submarine No. 50) and L-11. Upon arrival at Newport, the submarines were to “Carry out exercises to prepare the vessels” for immediate service. L-9 reported, on 3 November, having conducted tactical exercises and torpedo and gun practices in preparation for her deployment to European waters. Afterward, the crew had liberty to say farewell to their families before deploying.

Lt. (j.g.) Percy T. Wright, the boat’s commanding officer, decided to lay to until Bushnell (Submarine Tender No. 2) about seven miles to her rear could come to her. That never happened as she remained unseen in the darkness and heavy seas. The next day, the barometer rose and the seas abated which allowed the crew to take note of the damage to the boat and then to repair her wireless antenna. She issued a call for Bushnell, but received no response. Her gyrocompass was also not functioning. As a result, she decided to return to Boston. Through heavy seas and after sustaining additional light damage, she stood in to Boston on 13 December. In light of L-9’s experience, Submarine Force, Atlantic Fleet forwarded a confidential memorandum to the Office of the Secretary of the Navy, via the Bureau of Navigation, the Bureau of Steam Engineering, and the Bureau of Construction and Repair, “to invite attention to certain conditions encountered during extremely cold and heavy weather, which will affect the design of new submarines.” On 21 December, L-9 received a movement order directing her to shift to New London (Base No. 22), via the Cape Cod Canal, in company with Tonopah (Monitor No. 8). She was then ordered to continue on to Hampton Roads (Base No. 3) on 28 December. The next day while underway in a blizzard, the iron-hulled patrol vessel Berkshire (Id. No.1578), engaged in experimental underwater sound work, believing L-9 to be an enemy submarine, collided with the latter, bending the submarine’s bow cap, which needed to be repaired. The board of investigation convened on board Tonopah found that Berkshire was solely responsible for the collision with L-9.

L-9 stood at Hampton Roads awaiting repairs on New Year’s Day 1918. She finally departed the Submarine Base at Hampton Roads on 11 January. She was bound for Ireland via Bermuda and the Azores. Though under the nominal command of Vice Adm. Sims, Hart’s U.S. submarines in Ireland, were subject to the authority of Vice Adm. Sir Lewis Bayly, RN, Commander-in-Chief, Coast of Ireland, and his submarine commander, Capt. Sir Martin E. Nasmith (later Dunbar-Nasmith), RN. Bayly initially ordered Hart to deploy only one of his submarines at a time at sea, and that Royal Navy officers were to always be informed of departures and returns. Their patrol area was also to be limited to seaward of the Fastnet Light, so as to keep clear of British patrols and to avoid potentially fatal friendly-fire incidents. The submarines were originally to be based from Queenstown [Cobh], Ireland. That, however, proved unsatisfactory for Lt. Cmdr. Harold M. Bemis’ Division Five, as the base was also serving as the headquarters for the surface patrol forces. As a result, the U.S. submarines were relocated to a base at Berehaven [Castletownbere], Bantry Bay, Ireland. In the ensuing days (6–16 February), the division trained in Bantry Bay conducting dives and tactical maneuvers under the charge of the commander of the Royal Navy’s Submarine Flotilla also based at Berehaven. With the U.S. submarines now based at Berehaven, L-9 arrived in Bantry Bay on 21 February.

U.S. submarine officers also trained with a “submarine attack war game” apparatus on board British submarine tender HMS Vulcan. In order to denote them from the British L-class boats, the U.S. submarines were re-designated with the suffix “A” (American) and the letter was painted onto their fairwaters. The American submarines’ patrols were to be based on eight-day rotations, there would be eight days on patrol and eight days in port for overhaul, re-provision, and rest in preparation for the next eight-day patrol. L-9’s assigned patrol area was off the west coast of England at the mouth of the Bristol Bay, the inshore boundary running close to Lundy Island. In early March 1918, L-9 and L-11 both departed on their initial patrols together, before heading to their respective patrol areas, each dived to check ballast and trim and L-9 conducted a simulated attack run on L-11.

AL-9 arrived at Queenstown to undergo refit alongside Melville (Destroyer Tender No. 2) at the Haulbowline Dockyard on 6 May 1918. That work was completed by 11 June at which time the submarine cleared the yard and returned to Berehaven to resume her patrols. While on patrol near the Trevose Head light on 28 September, L-9 made a sound contact at approximately 5,000 yards and came to periscope depth. She was, however, unable to establish a visual contact. As she continued, the sound grew fainter and contact was eventually lost. Later in the day, the submarine encountered Stockton (Destroyer No. 73). The destroyer came close aboard and inquired if the submarine had seen any survivors from a sunken vessel. The submarine provided a negative reply and added that she had heard no torpedo detonations. Stockton and her fellow destroyers then proceeded to the north to continue their search.

On 31 October, AL-9 sighted in the haze, what appeared to be a German U-boat about three miles distant. She slowly submerged and made for the suspected enemy. She then heard two loud explosions close aboard. She surfaced and found a trawler armed with a 7-inch gun 1,000 yards off their port bow and closing. Additional shots fired by the trawler landed 150 yards away and shell fragments hit the superstructure, but produced no damage. The submarine detonated a smoke bomb and made the recognition signal. The trawler closed and enquired if their shots had done any damage. AL-9 replied, “No, thank you.” After this close encounter with friendly fire, AL-9 completed her patrol and returned to Bantry Bay without any further incident on 1 November and secured alongside Bushnell. Just ten days later the Armistice went into effect and hostilities ceased on 11 November. 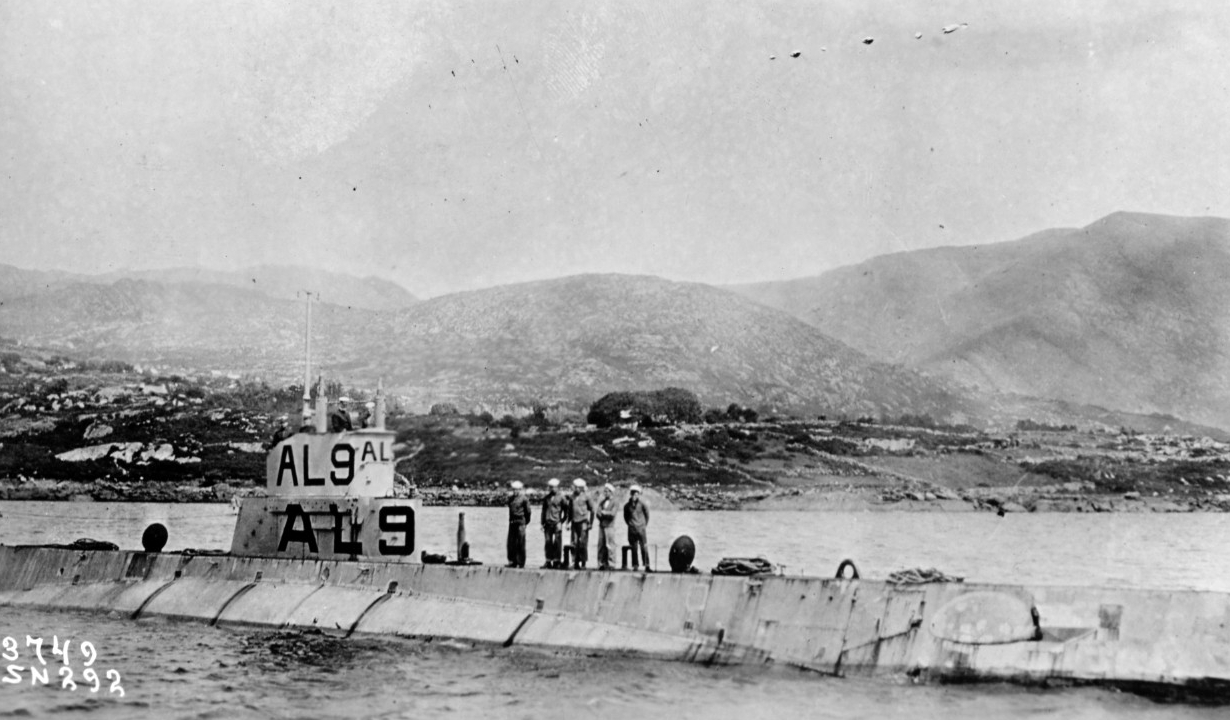 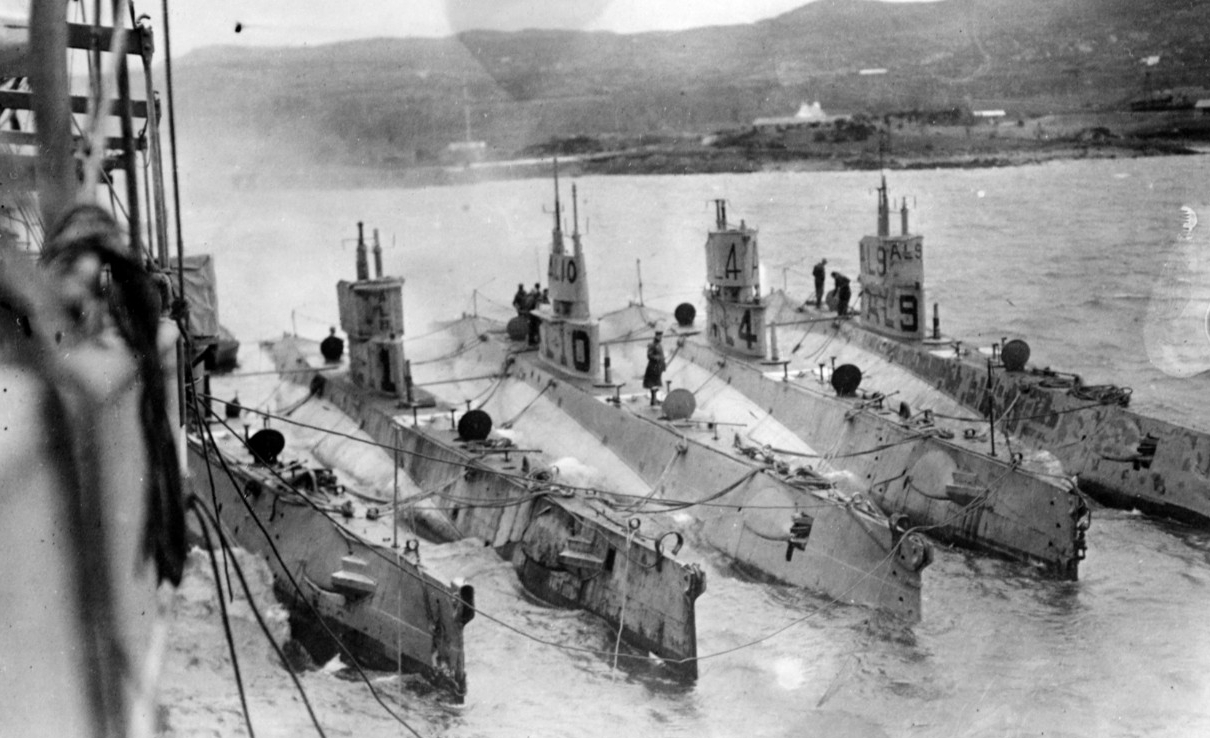 After the Armistice, L-9 shifted from her base at Berehaven and operated from Portland, England, until she cleared on 3 January 1919 for the United States. Steaming via the Azores and Bermuda, the submarine reached the Philadelphia (Pa.) Navy Yard on 1 February. Upon entering the yard, she underwent post-deployment overhaul and repairs. When completed, she cleared Philadelphia and shifted to her new homeport at the Submarine Base, headquartered on board Eagle 17, Hampton Roads. 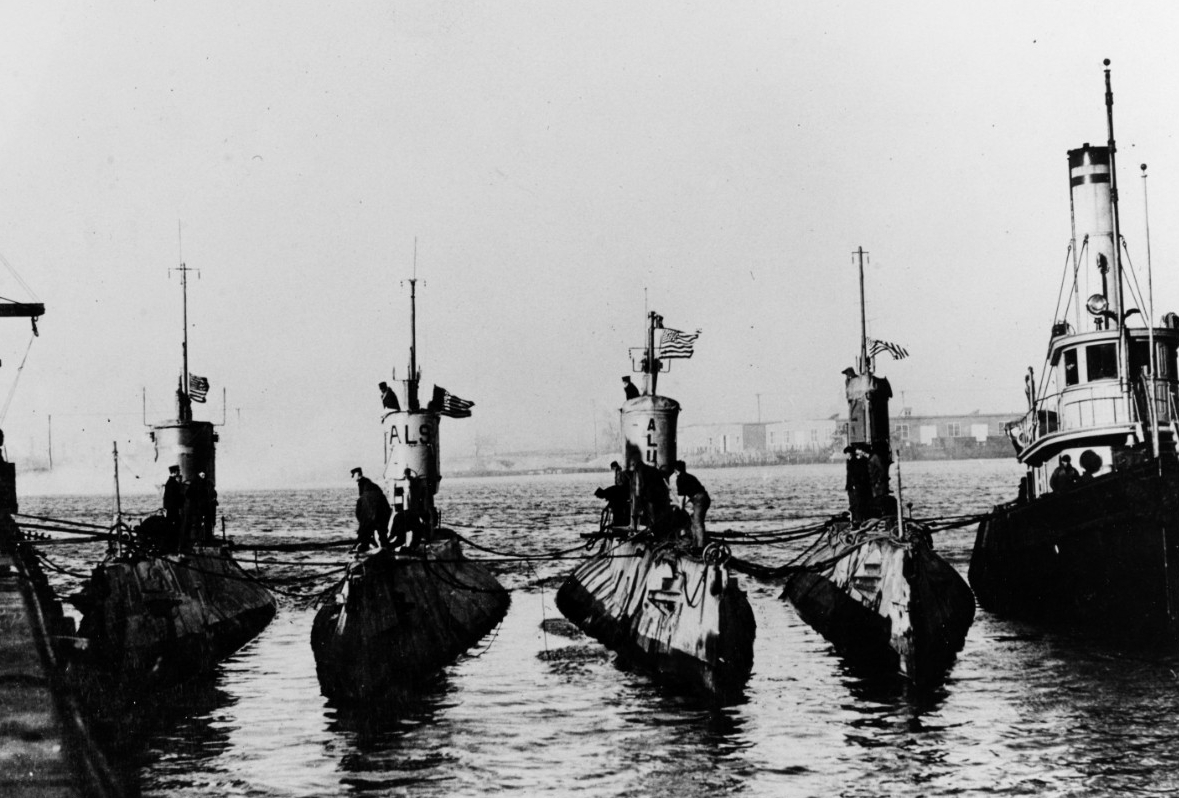 L-9 operated in the waters around Hampton Roads and off the Virginia capes from 18 June 1919 into September. On 8 September, she sailed up the Chesapeake Bay to Annapolis, Md. (9–10 September) before visiting Baltimore, Md. (11–17 September). Afterwards, she returned to Hampton Roads on 18 September and remained there through the end of the year, with the exception of a short period at the Norfolk Navy Yard (10–12 November). She returned to the Norfolk Navy Yard, on 8 January 1920, and remained there until 13 October, when she shifted back to Hampton Roads.

Despite her operational assessment, L-9 was placed in reduced commission at New London, on 1 May 1922 along with L-2, L-3, L-11, N-1 (SS-53), N-2 (SS-54), and N-3 (SS-55). Just over a week later, on 9 May, L-9 was assigned to Submarine Division Zero at New London. On 17 January 1923, the boat departed New London for the Portsmouth Navy Yard, Kittery, Maine, where she docked the next day. Clearing the yard on 9 March, she returned up the Thames River to New London on 10 March. Four days later, she was again underway, bound for a return to Hampton Roads; she reached and moored on 15 March.

L-9 was decommissioned at Submarine Base, Hampton Roads on 4 May 1923. She was towed to Norfolk Navy Yard, Newport News, Va. for drydocking on 26 August 1924. After clearing the yard, she was towed to the Philadelphia Navy Yard, arriving on 4 November. L-9 was stricken from the Navy list on 18 December 1930, and was scrapped on 28 November 1933.