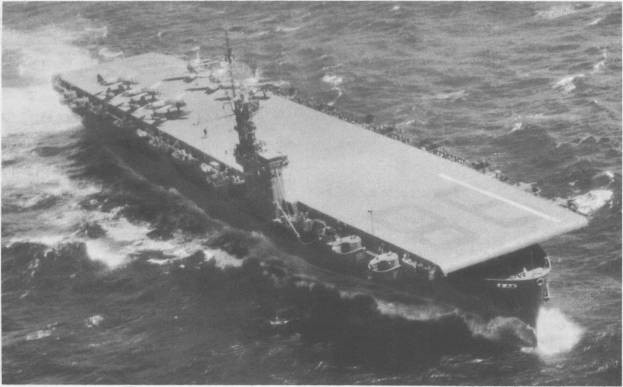 The World War II battle of 31 January 1944, for Kwajalein Atoll in the Marshall Islands.

After shakedown along the West Coast, Kwajalein cleared San Pedro 19 July 1944, bound for Espiritu Santo with passengers and a cargo of fuel and planes. Arriving 3 August, she sailed 4 days later to transport aircraft to Guam and pick up salvaged Japanese equipment for intelligence studies in the United States.

Following repairs at San Diego, Kwajalein got underway 7 October for operations as replenishment carrier. She loaded combat-ready aircraft at Manus and sailed for Eniwetok 5 November to replenish the carriers of Task Force 38 as they prepared for raids on Manila and the Visayas. Continuing operations from Ulithi, Kwajalein furnished the big carriers with the planes needed to drive the Japanese out of the Philippines. During January 1945, replacement aircraft roared from her decks to Task Force 38 flat tops for strikes on enemy air bases on Formosa and the China coast. Kwajalein returned San Diego 23 February for overhaul and additional aircraft before resuming operations 9 March.

From March to August Kwajalein carried aircraft on three cruises from Pearl Harbor to the western Pacific keeping carrier-based air groups at full strength for the massive carrier raids on the Japanese home islands. With the cessation of hostilities 14 August 1945, the carrier was assigned the task of returning Pacific veterans to the United States. She made four cruises to the Pacific Islands before arriving San Pedro 2 February 1946, from her final "Magic Carpet" mission. On 23 April Kwajalein cleared San Pablo Bay for Mukilteo, Wash., arriving there 3 days later. She decommissioned at Tacoma, Wash., 16 August 1946, and joined the Pacific Reserve Fleet. Her name was struck from the Navy List 1 April 1960, and she was scrapped in Japan the following year.