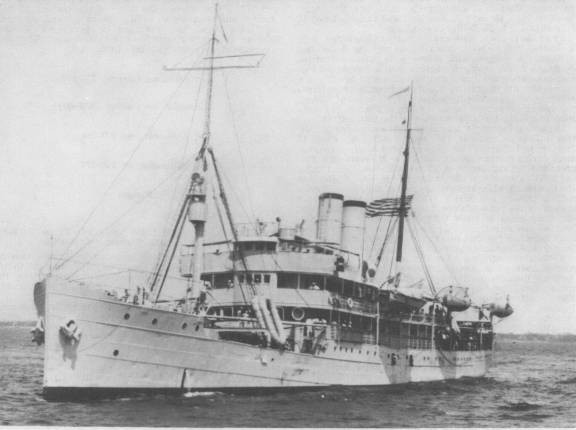 A coastal city in southwestern Maine.

Kittery (AK-2) was launched as the German transport, Praesident, 30 November 1905, by G. Seebach Co., Bremerhaven, Germany. Owned by the Hamburg-American Line, Praesident operated throughout the waters of the West Indies and the Caribbean. After the outbreak of World War I, she was suspected of supplying German cruisers in the Leward Islands. Following several harrowing cruises, during which she narrowly avoided capture by English and French ships, she entered the port of San Juan, P.R., early in 1915 and was interned with two other German merchantmen. After the United States entered the war in April 1917, she was taken over 14 May by the U.S. Navy. Praesident sailed to the United States escorted by Hancock (AP-3) and was refitted for naval service. She commissioned as Kittery 6 July at Philadelphia, Lt. Comdr. Charles Geddes, USNRF, in command.

Assigned to cargo and troop transport duty between the United States and the West Indies, Kittery departed Philadelphia 18 July. Operating out of Charleston, S.C., she made monthly trips during the remainder of the war to supply American forces. After the war she continued her cargo service from Charleston and Norfolk for more than 15 years, making scores of runs to West Indian ports. Following a final trip to Guantanamo, Port-au-Prince, and Cape Haiten, she arrived Norfolk 21 December 1932. She proceeded to Philadelphia 28 January 1933, arriving the 30th. Kittery decommissioned 5 April, and her name was struck from the Navy List 11 April, 1933. Transferred to the USSB 26 June 1933, she was scrapped in 1937.