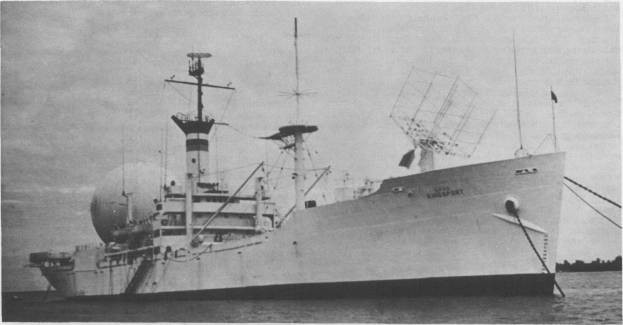 A merchant name retained. Kingsport is a city in northeastern Tennessee.

From July to October 1944 Kingsport Victory made cargo runs between the West Coast and Pearl Harbor; then she sailed for the Western Pacific 17 October. After arriving Milne Bay, New Guinea, 2 November, she carried cargo during the remainder of the war to American bases at Eniwetok, Iwo Jima, Guam, Ulithi, and Okinawa. She departed Okinawa 27 December 1945; steamed via Hong Kong, Calcutta, and the Suez Canal; and reached New York 27 February 1946. During the remainder of 1946 she transported cargo between the East and West Coasts.

The cargo ship was acquired by the Navy from the Maritime Commission 1 March 1950 and assigned to MSTS.

Manned by a civilian crew, Kingsport Victory operated in the Atlantic, the Mediterranean, and the Caribbean from 1950 until late 1956. Carrying military cargo, she steamed out of New York and Charleston, S.C., to ports in the United Kingdom, Germany, France, Italy, Greece, Turkey, Spain, and North Africa. In addition, she transported supplies from Norfolk, Va., to the Canal Zone and to American bases in the Caribbean.

Loaded with cargo, Kingsport Victory departed Norfolk 13 November 1956 for the Far East. Steaming via the West Coast, she reached Yokohama, Japan, 20 December; and, during the next month, she shuttled supplies to Okinawa, Formosa, and South Vietnam. She departed Saigon for the United States 28 January 1957; reached San Francisco 15 February; and arrived New York 8 March to resume transatlantic cargo service.

Between March 1957 and August 1961 Kingsport Victory maintained a busy schedule for far-ranging cargo runs that sent her from the eastern Mediterranean to the western Pacific. In addition to numerous round-trip voyages between New York and West European ports, she deployed four times to the Mediterranean where she supported ships of the mighty 6th Fleet. Though operating out of New York, she completed eight deployments to the Far East. Her cargo runs sent her to Japan, South Korea, Ftormosa, Hong Kong, and Thailand, as well as to the Marshall and Aleutian Islands.

After returning to the United States from the Mediterranean 29 August 1961, Kingsport Victory departed New York for the West Coast 5 September. Steaming via San Diego and San Francisco, she reached Portland, Oreg., 24 September and underwent conversion to a satellite communication ship by Willamette Iron & Steel Co. at Portland. On 14 November she was renamed Kingsport and reclassified AG-164.

Designed for use by the U.S. Army Satellite Communications Agency in the defense satellite communications programs, Project ADVENT, Kingsport Victory underwent extensive alteration during conversion. A special high frequency radio station was installed for ship-to-shore communications. She received advanced tracking and telemetry equipment and anti-roll stabilization tanks. In addition, a 30-foot, gyro-stabilized, computer-oriented, triaxial, parabolic antenna was installed on her afterdeck. Housed in a 53-foot, plastic, air-pressurized radome, this antenna permitted precision tracking of a high altitude satellite at any angle above the horizon.

From 12 to 26 April 1962 Kingsport steamed to the Philadelphia Naval Shipyard where, during the next 6 months, the antenna and radome were installed. Following shakedown and equipment trials off the coast of Virginia, she departed Philadelphia 5 January 1963 and arrived off Lagos, Nigeria, 18 January. During the next 2 months she conducted communications tests in the Gulf of Guinea before returning to Norfolk 29 March.

Between 17 June and 1 July, Kingsport again sailed to Lagos. After the successful launching of a synchronous communication satellite (SYNCOM2) from Cape Canaveral 26 July, she served as terminal control station during the testing and evaluation of the satellite. She departed Lagos 23 September; reached Rota, Spain, 3 October; then sailed the 6th for further communication tests in the Mediterranean. She cruised the Mediterranean from 7 to 25 October and touched at Leghorn, Italy, and Beirut, Lebanon. During this time she conducted successful voice and teletype tests between the United States and ships of the 6th Fleet via satellite. She returned to Rota 26 October; and, after completing additional experiments, she sailed for Norfolk 9 November and arrived 21 November.

Kingsport departed for the Pacific 17 February 1964. Steaming via Puerto Rico and the Panama Canal, she touched at San Diego 13 March and reached Pearl Harbor the 25th. During the next 10 months she steamed between Pearl Harbor and Guam while conducting communication experiments. She supported the evaluation of SYNCOM 3 after its launching 19 August, and communication experiments sent her throughout the Western Pacific and into the Indian Ocean. She continued to support these important tests until July 1965 when she provided her "know how" and wealth of equipment for NASA's Gemini manned space shots. She served as an on station communications ship between Okinawa and the Philippines during the flight of GT-5 from 21 to 29 August. She supported three more Gemini flights between 4 December and 16 March 1966, then returned to the West Coast the following month. She remained at San Francisco from 18 April to 27 October in a ready reserve status. During November she steamed to the East Coast, and in early 1967 was at New York undergoing repairs and alterations.