An active volcano on the island of Hawaii.

The second Kilauea (AE-26) was laid down on 10 March 1966 by General Dynamics Corp., Quincy Div., Quincy, Mass.; launched on 9 August 1967; sponsored by Mrs. Alice C. Kirwin, wife of Representative Michael J. Kirwin of Ohio; and commissioned at Boston Naval Shipyard, Charleston, Mass., on 10 August 1968, Capt. William L. McGonagle, holder of the Medal of Honor for his heroism while in command of technical research ship Liberty (AGTR-5) when Israeli aircraft and three motor torpedo boats attacked her on 8 June 1967. 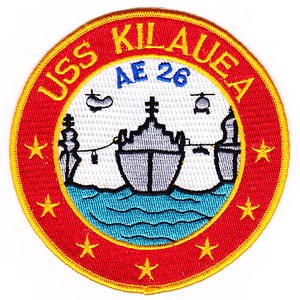 The dominant figure of the crest is Kilauea (AE-26) executing her primary mission of supporting the fleet. Kilauea transfers a pallet from the ship’s starboard side to another vessel, representing her conventional replenishment capabilities. The ammunition ship utilizes the Standard Tension Replenishment Alongside Method (STREAM) to transfer a missile from her starboard side. Two helicopters fly overhead, symbolizing the ship’s capabilities to carry out vertical replenishments.

The circular shape of the crest represents the global mobility of sea power. The seven stars symbolize the seven seas on which Kilauea sails, her (initial) administrative assignment to Service Squadron 3, and her operational deployment to the Seventh Fleet.

The color red represents lava flowing from the Kilauea crater; the name Kilauea translates as “spewing” or “much spreading,” and the volcano comprises the center of attraction of Hawai’i Volcanos National Park. Red also indicates the danger inherent in handling explosives. In addition: white represents purity of purpose; blue symbolizes the sea; and gold represents the quality of the constancy and professionalism of the ship’s sailors who serve those who serve. 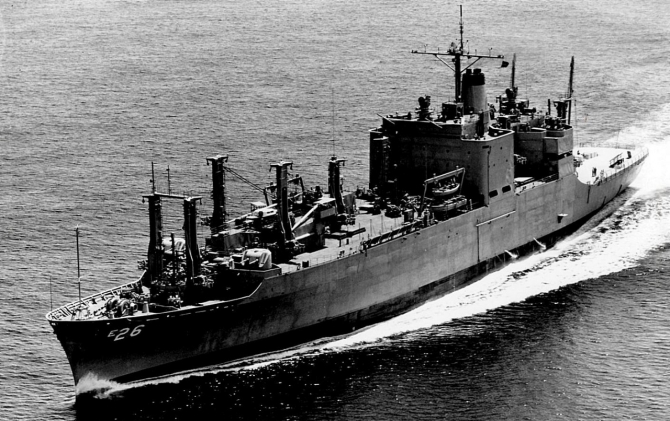 Kilauea shifted from the Atlantic to the Pacific Fleets when she sailed from Norfolk, Va., to Concord, Calif. (11 October-8 November 1969). The ship carried out her first underway replenishment, with amphibious cargo ship Yancey (LKA-93) on 16 October, and visited Guantánamo Bay, Cuba (16-18 October). Kilauea passed through the Panama Canal and put in to Naval Station Rodman there (18-23 October), and then visited Acapulco, Mexico (29 October-2 November). While the ship steamed in Southern Californian waters she recorded her first helicopter flight operations on 16 December, and the following day, her initial use of the Fast Automated Shuttle Transfer (FAST) system, when she replenished guided missile escort ship Brooke (DEG-1).

Typhoon Olive (Atang) swept across the central Philippines (15-26 April 1978). The tempest caught Kilauea while she operated in the midst of a deployment to the Western Pacific (7 March-6 October). A grey sky cast a gloom over Kilauea and large waves whipped by strong winds pounded the ship as she entered Manila Bay for a brief visit on 21 April. Despite the poor visibility, a lookout spotted two Filipino fishermen, 29-year-old Rodante Ipil and 26-year-old Honorio Vera, clinging to the debris of their sunken fishing boat, Jess Jane, about two miles off Caballo Island. The two put to sea from Naic, Cavite, to fish within Manila Bay on the afternoon of 19 April. By nightfall, however, the heavy seas broke their outriggers and the boat rolled over, spilling their catch back into the water.

Other vessels passed the fishermen but failed to see them because of the mountainous waves. Cmdr. Francis M. Verona, Kilauea’s commanding officer, took control of the ship and brought her about. Chief Mess Specialist Joselito A. Madlangbayan organized a detachment of 19 fellow Filipino crewmen who gave the survivors hot coffee, food, and denim pants, workshirts, and T-shirts. A number of the crewmen discovered that the survivors were kababayans (town mates). Kilauea then landed the mariners on Pier 15, South Harbor, where they transferred them to the Philippine Coast Guard. Commodore Simeon M. Alejandro, that service’s commandant, later personally thanked Verona and his crew and presented them a plaque of appreciation.

Kilauea sailed toward Iwakuni, Japan, on 25 June 1978, but stopped her transit when she encountered dense fog, and anchored at an anchorage 50 miles south of her destination. The ship’s two embarked Sea Knights transferred cargo ashore to Iwakuni, and Kilauea then proceeded to Matsuyuma, Japan, en route to Keelung, Taiwan. She exited the Inland Sea via the Bungo Strait overnight on 25-26 June. Japanese ore/oil carrier Japan Wisteria, Murakami Mashahiko, master, of Japan Line, Ltd., sailed into the area en route from Nagoya to Kure, Japan. Both ships steamed in a meeting situation, and Kilauea attempted to maneuver out of the Japanese ship’s course. The ammunition ship turned left full rudder to avoid a collision at about 2118 (both ships disagreed on the time). This decision violated Rule 14 of the 1972 International Regulations for Preventing Collisions at Sea, which directs ships to alter their course to starboard to make a port to port passage.

Japan Wisteria ordered right full rudder to prevent, or at least to lessen, the impending collision, but this dropped her speed to seven knots, while Kilauea had way at 18 knots. Kilauea blared a siren but at about 2121 they collided. Kilauea’s starboard quarter struck Japan Wisteria’s port side, causing extensive damage to both vessels. Kilauea lost several helo nets, but neither ship reported casualties or impairment of their seaworthiness and continued on their voyages. Kilauea repaired her injuries during a $24,170.31 availability at Leyte Pier, Subic Bay, Philippines (30 July-14 August). Ishikawajiha, Haruna Heavy Industries Co., Ltd., Kure Shipyard, repaired Japan Wisteria. The U.S. subsequently paid the Japanese company ¥32,484,365 (approximately $147,656.00) as compensation for the damages caused to Japan Wisteria.

A mob of Iranian revolutionaries seized 66 Americans, including one naval aviator and 14 Marines, at the U.S. Embassy and the Iranian Foreign Ministry in Tehrān, Iran, on 4 November 1979. The demands of the revolutionaries included the return to Iran of deposed Shah Mohammad R. Pahlavi, who was in the U.S. Kilauea deployed to the Western Pacific and the Indian Ocean (13 November 1979-9 June 1980).

One of the ship’s lookouts sighted a small fishing boat carrying 67 Vietnamese refugees, at 1715 on 31 January 1980. The castaways had set sail 20 days before but their engine broke down, and they drifted to a point nearly 200 miles from land when they encountered Kilauea. The refugees raised a large green sail displaying the letters SOS in large white figures on the forward part of their vessel. Kilauea’s motor whale boat took the derelict in tow to the ammunition ship’s accommodation ladder, and crewmen assisted the emaciated survivors on board. The ship then carried them to Singapore, where she disembarked the people the following afternoon. Kilauea continued to the Indian Ocean and served as a logistics support ship for a number of ships that responded to the Iranian hostage crisis, including aircraft carriers Nimitz (CVN-68) and Coral Sea (CV-43), and amphibious assault ship Okinawa (LPH-3).

While Kilauea sailed for home, she briefly moored at Wharf W-1, Naval Magazine, Lualualei, Hi., and embarked her “tigers” (male dependents of the crewmen), on 2 June 1980. The following day, she shifted to Fuel Pier H-2 to refuel. Prior to her return to Californian waters, however, the Coast Guard radioed the ship, requesting assistance in the search for High Spirit, a sailboat and her two crewmembers that sailed from Long Beach, Calif., but was last seen 300 miles north of Oahu. One of Kilauea’s embarked Sea Knights discovered High Spirit on 4 June. The ship’s executive officer led a boarding party via the motor whale boat, and they spent eight hours attempting to repair her engine, but heavy seas compelled them to discontinue the repairs. One of the boat’s crewmembers elected to return on board Kilauea, but the other sailor decided to sail the boat home. Kilauea provided the hardy mariner with sailing instructions and directions, food, batteries, and extra clothing, and steamed from the area later that evening. A Coast Guard cutter subsequently discovered High Spirit and escorted her into Hawaiian waters.

The ship was placed out of service and laid up at the Naval Sea Systems Inactive Ships Maintenance Facility, Pearl Harbor, pending disposal, on 15 September 2008. Salvage ship Salvor (T-ARS-52) towed Kilauea from Pearl Harbor on 18 July 2012, to participate in RimPac 2012. Forty ships and submarines, and more than 200 aircraft and 25,000 people, from 22 nations, took part in the exercise in and around the Hawaiian Islands, principally near the Pacific Missile Range Facility Barking Sands (29 June-3 August). At 0932 on 22 July, Australian attack submarine Farncomb (SSG.74), Cmdr. Glen Miles, RAN, in command, sank Kilauea with a Mk 48 torpedo in waters 15,480 feet deep, 63 miles northwest of the coast of Kauai, Hawaii. 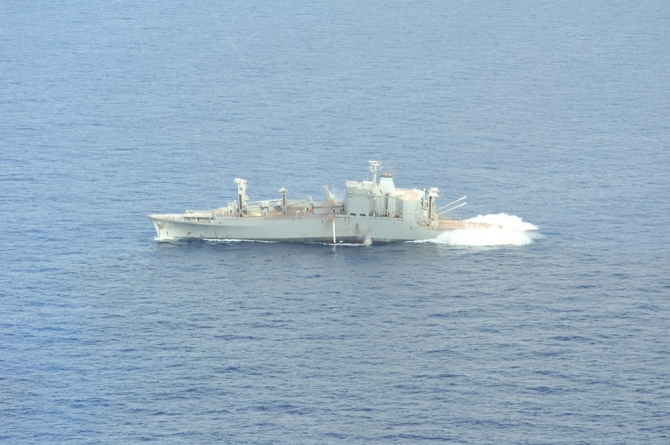