James Laurence Kauffman, born in Miamisburg, Ohio, on 18 April 1887, attended public school in Miamisburg, Steele High School in Dayton, Ohio, Pennsylvania Military College in Chester, Pa., and a private school in Washington, D.C., before his appointment from Ohio to the United States Naval Academy at Annapolis, Md., on 29 June 1904. Graduating in 1908, he served the two years at sea then required by law, serving successively in St. Louis (Cruiser No. 20), Milwaukee (Cruiser No. 21), tug Fortune, and Tennessee (Armored Cruiser No. 10) while they sailed off the west coast of the United States and to the Philippines, China, and Japan. On 26 March 1910 he joined Hopkins (Destroyer No. 6), assigned to the Pacific Fleet, and was commissioned an Ensign on 27 January 1911 (to rank from 6 June 1910). Kauffman assumed command of Hopkins on 21 August 1912, commanding her during operations in Mexican waters (summer-November 1914). He then had duty as Assistant Manager, Naval Experiment Station, Naval Academy, until 22 November 1916, when he joined Texas (Battleship No. 35) until 14 March 1917. Kauffman married Elizabeth K. (nee Draper) of San Francisco, Calif. Their union produced two children, Draper L. (see below) and Elizabeth L. Their daughter married Prescott S. Bush Jr., brother of future President George H.W. Bush.

Following armed guard duty in receiving ship, Norfolk, Va. (15 March-12 May 1917), he was transferred to similar duty in receiving ship, New York, N.Y. On 5 June 1917, he reported on board Tenadores as the troop transport’s executive officer, sailing her on her first wartime voyage to European waters. Detached from Tenadores on 21 July of that year, he assumed command of schooner Patrol when she was commissioned on 30 July 1917. He led Patrol while she was reclassified to a motor patrol boat and renamed Rainer on 10 August, and detached 28 August to assist in fitting out Caldwell (Destroyer No. 69) at Mare Island Navy Yard, Calif, which was commissioned on 1 December 1917. Kauffman served as her executive officer while the destroyer deployed to Queenstown, Ireland, and on 15 June 1918 he assumed command of Jenkins (Destroyer No. 42), also operating out of Queenstown, to 11 September 1918. He later received the Navy Cross for his leadership of the ship “in the exacting and hazardous duty of patrolling the waters infested with enemy submarines and mines, and escorting and protecting convoys of troops and supplies.”

Returning to the United States, he fitted out Barney (Destroyer No. 149), commanding the ship from her commissioning on 14 March 1919, and through voyages to Constantinople (Istanbul) during the collapse of the Ottoman Empire, and later along the Atlantic coast of the United States and to the Caribbean. Kauffman then completed a three year tour ashore in the Bureau of Engineering’s Radio Division at Washington, D.C. (16 November 1920-9 June 1923), before serving as Aide and Flag Secretary on the staff of Adm. Samuel S. Robison, Commander in Chief, Battle Fleet, on board battleship California (BB-44), continuing his staff duty with Adm. Robison, Commander in Chief, U.S. Fleet, on board Seattle (Armored Cruiser No. 11) (4 September 1925-4 September 1926). Kauffman followed that assignment by serving in the Office of Naval Intelligence at Washington until 15 February 1927, and then as a member of the U.S. Naval Mission to the Brazilians, in connection with that navy’s destroyers, to 31 January 1931. He rejoined Texas as her Navigator (5 April 1931-20 February 1932), when he became her executive officer. Detached from the battleship on 9 June 1933, he completed instruction at the Naval War College, Newport, R.I., through 25 May 1934, and then served a year as executive officer of Naval Training Station Newport.

Kauffman assumed command of light cruiser Memphis (CL-13) on 1 June 1936, sailing her on a “good will cruise” to the Caribbean and later operating with the Pacific Fleet. On 17 January 1938, he reported for duty as Captain of the Yard, Mare Island Navy Yard, Calif., serving until 2 January 1940, when he was ordered to recommission and command the 16 overage destroyers of Destroyer Squadron 36 with the Eleventh Naval District at San Diego, Calif., many of which were subsequently transferred to the British and Canadians. Kauffman meanwhile commanded the destroyers while they operated along the Texas and Mexican coasts, and later in the Caribbean. He next commanded Destroyer Squadron 30 (2 January-28 September 1940), followed on 23 December 1940 by Destroyer Squadron 7.

In addition to his other duties, he served as Commander Destroyers, Support Force, Atlantic Fleet, engaged in convoying troops and ships to Newfoundland and Iceland (1 March-23 September 1941). He later received a letter of commendation from Secretary of the Navy William F. Knox for carrying out “the specialized training of Destroyers, Support Force, in the anti-submarine tactics which subsequently contributed to the safe escort of convoys and other shipping in the Western North Atlantic. For your outstanding performance of duty during this period you are hereby commended.”

Kauffman then served as a member of the General Board at Washington (14 October-8 December 1941). Later in December he was assigned duty in establishing Naval Operating Base Iceland, and became the Commandant of that base (23 December 1941-17 May 1942. The following month, he reported for duty as Commandant of the Seventh Naval District and Commander Gulf Sea Frontier, with headquarters at Key West and later Miami, Fla. (1 June 1942-3 February 1943). While in that command he was responsible for the Allied effort to fight German U-boats in the area stretching from Jacksonville, Fla., to the Mexican coast, including the entire Gulf of Mexico and its strategic entrances. Kauffman later received the Legion of Merit for this service.

On 3 February 1943, he reported for duty at Headquarters, Adm. Ernest J. King, Commander in Chief, U.S. Fleet, Washington, and had additional duty (March-September) as the senior member of the Allied Antisubmarine Board, with headquarters at Washington and London, England. During his time on the board, its members visited most of the Allied antisubmarine air and ship stations on both sides of the Atlantic. In October 1943, a part of the board was assigned duty in the Pacific and Vice Adm. Kauffman carried out duty in connection with antisubmarine operations in the South Pacific and the Southwest Pacific.

In November and December 1943, he was attached to Aircraft Squadrons, Pacific, during the attacks on Japanese-held Tarawa and later Kwajalein, and on 2 January 1944, took command of Destroyers Pacific Fleet, and Cruisers, Pacific Fleet. For his leadership in that joint command through 10 October 1944, he received a Gold Star in lieu of his second award of the Legion of Merit, displaying “exceptional ability and initiative” in handling the ships under his command, and in “contributing greatly toward the development of a destroyer base at Pearl Harbor, Territory of Hawaii.”

Kauffman next reported to Gen. Douglas A. MacArthur, USA, Supreme Commander Southwest Pacific Area, and Adm. Thomas C. Kinkaid, Commander Allied Naval Forces, Southwest Pacific Area, and Seventh Fleet, in Hollandia, New Guinea, to help organize the Philippine Sea Frontier. He led that command (November 1944-18 May 1946), with headquarters initially at Leyte Gulf until August 1945, and then shifting to Manila. During the early days of the fighting at Leyte Gulf he also acted as Senior Officer Present Afloat. He relieved Kinkaid as Commander of Naval Forces Operating in the Philippines in August 1945. Kauffman subsequently received the Distinguished Service Medal for his “keen foresight, outstanding administrative ability and conscientious devotion” while commanding the Philippine Sea Frontier. He then served as Commandant Fourth Naval District, with additional duty as Commander Naval Base, Philadelphia, Pa., from 20 June 1946 until he retired on 1 May 1949.

The day after he retired he became the president of Jefferson Medical College and Jefferson Medical Center, serving in those positions until 30 June 1959. Vice Adm. Kauffman worked tirelessly on numerous civic and religious programs during his retirement, including the Eastern Pennsylvania Psychiatric Institute, being named the institute’s chairman of the board in 1951, and helping to establish the mission structure of the Church of the Holy Trinity in South Philadelphia. In that capacity, he commenced and continued the Sunday radio broadcasts of the church’s worship services, largely as an outreach for people hospitalized or otherwise unable to attend the services. He served as a member of the Board of Directors for the Central Philadelphia Branch of the American Red Cross (1960-1963), also becoming that board’s chairman in 1960. Kauffman moved to Washington, D.C., in 1963, where he died of a heart attack at National Naval Medical Center, Bethesda, Md., on 21 October 1963, and was buried at the Naval Academy Cemetery. In addition to his U.S. awards, Kauffman received the Belgian Order of Leopold II for his World War I service, and the Brazilian War Service Medal, Cuban Order of Merit, and Philippine Distinguished Service Star for his World War II service.

Draper Laurence Kauffman, born in San Diego, Calif., on 4 August 1911, to James L. and Elizabeth K. (nee Draper) Kauffman. He attended St. Alban’s School in Washington, D.C., Kent School in Kent, Conn., and the Naval Academy at Annapolis, Md., from Ohio in 1929. As a midshipman, Kauffman served as a member of the Lightweight Crew, and was elected captain in 1933. He also belonged to the Masqueraders, Trident and Quarterdeck Society, and served on the staffs of “The Log” and “The Lucky Bag.” Upon graduating from the Naval Academy, he was forced to resign because of poor eyesight.

He therefore worked for the U.S. Line Steamship Company in San Francisco, Calif., New York, and the company’s European offices until 16 April 1940, when he joined the American Volunteer Ambulance Corps operating with the French Army. The Germans captured Kauffman on 18 June 1940, holding him prisoner until that August. The French subsequently awarded him the Croix de Guerre with Star for his service with the Corps.

After leaving the prison camp he made his way to England via France, Spain, and Portugal, and joined the British Royal Navy Volunteer Reserve, serving as a sub-lieutenant and a lieutenant. The British Admiralty commended Kauffman twice for his service as a bomb and mine disposal officer (September 1940-November 1941). On 25 March 1941, King George VI also commended him for his services during these operations.

Kauffman resigned from the Royal Navy and accepted an appointment as a lieutenant in the U.S. Naval Reserve on 7 November 1941. He was then ordered to the Bureau of Ordnance, at Washington, D.C. Because of his previous bomb disposal experience with the British, he was rushed to the Hawaiian Islands following the Japanese attack on Oahu on 7 December 1941. An enemy plane had dropped a 500 pound bomb onto the field near the Army’s Schofield Barracks, but the bomb failed to explode. Kauffman had only worked on German ordnance, but despite his unfamiliarity with the Japanese device, he courageously and skillfully disassembled the bomb, saving its parts so that ordnance experts could examine the weapon. He later received the Navy Cross for his “courage, confidence and exceptional skill” in disassembling the bomb.

In January 1942, he was assigned the task of organizing a Naval Bomb Disposal School at the Washington Navy Yard. He also helped the Army set-up a similar school at Aberdeen, Md. In June 1943, Kauffman was directed to organize the Navy Demolition Teams, which later became known as the Underwater Demolition Teams (UDTs). In addition, he received orders as the first commanding officer of Naval Combat Demolition Unit, Naval Amphibious Training Base, Fort Pierce, Fla. While there, he also organized and was the first chairman of the Joint Army and Navy Experimental and Testing Board, for which he received the Navy Commendation Medal.

He received the Gold Star in lieu of a second Navy Cross “for distinguishing himself.”

He was transferred to the Regular Navy on 15 October 1946. 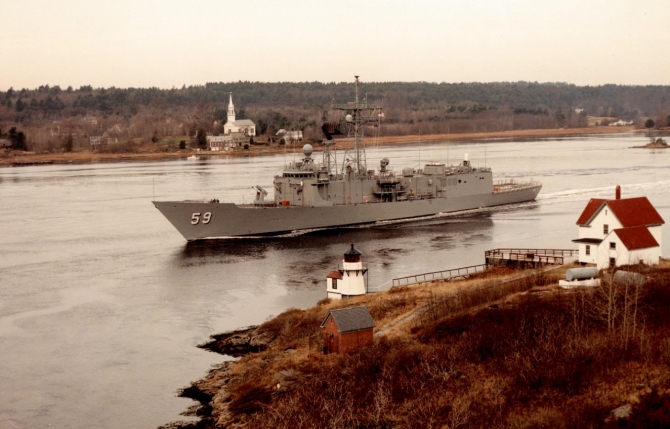 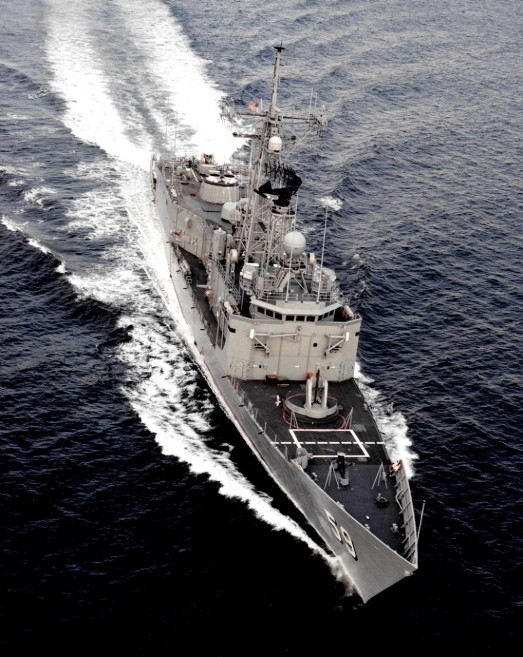 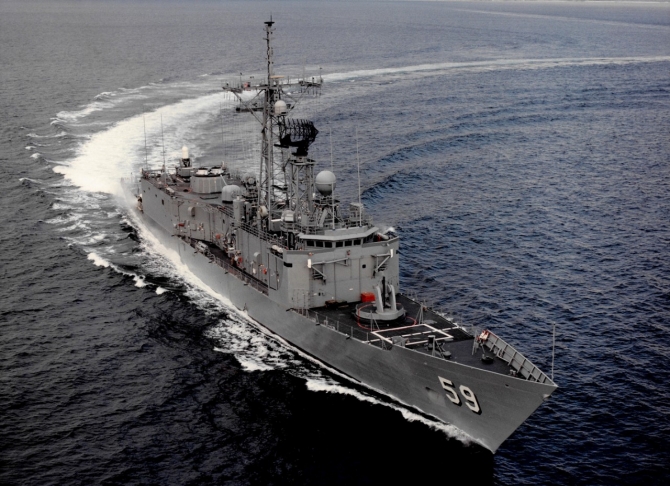 23 July 2002 Two SH-60B Seahawks of HSL-48 Detachment 7 designated Venom 502 and Venom 510 began a six month deployment to the Mediterranean and the Arabian Gulf on board Kauffman, which sailed with aircraft carrier George Washington (CVN-73). The detachment conducted multiple maritime interception operations during the cruise including one that involved 60 flight hours tracking a merchant vessel, leading to the capture of 15 suspected al-Qaeda terrorists by Italian authorities.