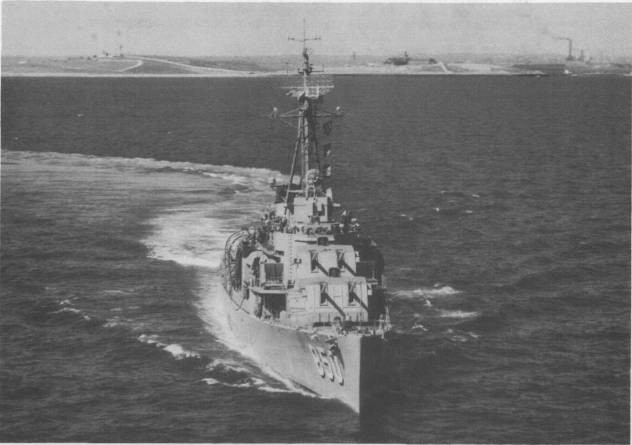 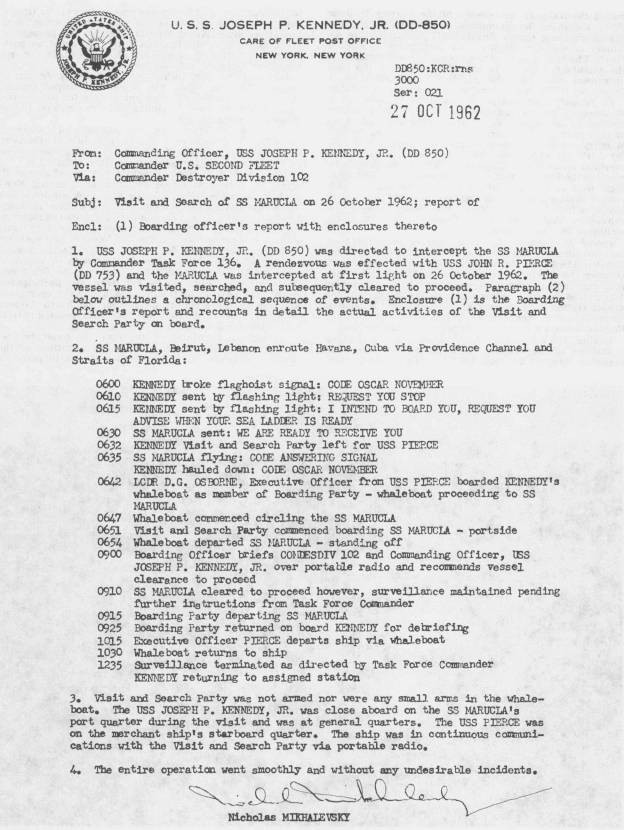 Joseph Patrick Kennedy, Jr., older brother of President John F. Kennedy, was born in Nantasket, Mass., 25 July 1915. He attended Harvard College and Harvard Law School, enlisting in the Naval Reserve 24 June 1941. After flight training, Kennedy was commissioned Ensign 5 May 1942. He served with Patrol Squadron 203 and Bombing Squadron 110 before joining a special air unit in Britain in 1944. He was appointed Lieutenant 1 July 1944. Lt. Kennedy took part in a secret project to destroy German V-2 rocket launching sites by the use of radio controlled drone aircraft loaded with explosives. The plane could not take off by radio control, however, and Kennedy volunteered to take her into the air where guidance systems would take over. After exhaustive preparations he and another brave flyer, Lt. W. J. Willy, took off from Win-farthing 12 August 1944. However, the drone exploded with two enormous blasts, killing both officers. Lt. Kennedy was awarded the Navy Cross posthumously for this dangerous mission in the drone Liberator bomber. His citation testifies: "Intrepid and daring in his tactics and with unwavering confidence in the vital importance of his task, he willingly risked his life in the supreme measure of service, and, by his great personal valor and fortitude in carrying out a perilous undertaking, sustained and enhanced the finest traditions of the United States Naval Service."

The new destroyer sailed 4 February 1946 for shakedown training in the Caribbean. She returned to her homeport, Newport, in April, and was occupied for the next few months in Naval Reserve Training. Arriving Norfolk 8 October, the ship joined Admiral Leahy's flagship Wisconsin BB-64, and other units for a cruise to Chile and Venezuela. She transited the Canal twice on this voyage, and was reviewed by the President of Venezuela 25 November 1946. Joseph P. Kennedy, Jr., returned to her home port 14 December 1946.

During 1947 the destroyer operated on the East Coast and in the Caribbean. She sailed for fleet maneuvers off Puerto Rico 9 February and upon completion steamed eastward to join the 6th Fleet in the Mediterranean. During this period of great unrest in Europe, the fleet carried out the important role of peacekeeper and stabilizer. Joseph P. Kennedy, Jr. visited various Mediterranean ports before arriving Newport 26 June 1948. The remainder of the year was spent in antisubmarine exercises, and the first half of 1949 saw her make two training cruises to the Caribbean.

The ship sailed 23 August 1949 for 6th Fleet duty as flagship of Destroyer Squadron 18, returning 27 January 1950. With the advent of war in Korea she carried out reserve training during July 1950, followed by bombardment and convoy exercises to prepare for action defending South Korea from Communist aggression. Joseph P. Kennedy, Jr., sailed for Japan 3 January 1951 by way of the Panama Canal, Pearl Harbor, and Midway. At Sasebo she loaded ammunition and, exactly 1 month after departure from Newport, joined Task Force 77 off Korea. From February to April she screened the attack carriers as they pounded enemy positions and supply lines. She departed 8 April for the Formosa Patrol, helping to prevent further hostilities across the volatile Straits. Joseph P. Kennedy, Jr., then returned to Korea arriving off Won-san 20 May to take up bombardment station in support of the Allied siege and occupation of harbor islands. This duty continued until 13 June, a period of almost constant bombardment of great importance to the operation, after which the ship steamed to Sasebo.

Joseph P. Kennedy, Jr., did not return to the West Coast immediately upon the termination of this combat duty, but instead steamed westward to complete a circuit of the globe. With other units of Destroyer Squadron 8, she visited Singapore, Bahrein, Port Said, Naples, and Gibraltar before returning to Newport 9 August 1951. Until January 1953 she conducted battle practice and served as school ship for the Fleet Training School at Newport that serves well to keep the fleet abreast of the latest developments. She sailed 7 January for another 6th Fleet cruise, returning to Newport 18 May 1953. Antisubmarine training exercises and another Mediterranean cruise January-May 1954 comprised her duty through most of 1955, and she sailed 5 November for Arctic maneuvers off northern Europe. The ship visited Oslo, Norway, and Bremerhaven, carrying out tactical exercises with units of the 6th Fleet before returning to Newport 5 March 1956.

In June 1956 the veteran ship arrived Annapolis with Iowa (BB-61) and New Jersey (BB-62) to embark Naval Academy midshipmen for a practice cruise. Upon returning from Northern Europe 1 August, the ship took part in training operations until 6 May 1957, when she sailed once more for 6th Fleet duty. The Jordanian crisis had just passed with the strong support of the fleet, and Joseph P. Kennedy, Jr., took part in carrier operations until September, when she steamed to the coast of Norway for NATO joint maneuvers. She returned to Newport 22 October 1957. Again in 1958 the ship sailed to the Mediterranean, and on this cruise spent April in the Persian Gulf with the Middle East Force that helps stabilize that critical area before arriving Newport 1 July 1958.

After a needed period of overhaul at Boston, Joseph P. Kennedy, Jr., arrived Annapolis once more 3 June 1959 for midshipman training. Along with other ships of the task group, she entered the St. Lawrence and represented the Navy at the opening of the Seaway 26 June 1959. Following the ceremonies, in which both President Eisenhower and Queen Elizabeth II took part, the destroyer entered the Seaway and steamed to Chicago 2 July. The ship visited various ports before returning to the Atlantic 6 August. In 1960 she returned to the Mediterranean with Forrestal (CVH-59) and Franklin D. Roosevelt (CVB-42), returning to Newport 15 October.

In January 1961 Joseph P. Kennedy, Jr., steamed to Washington for the inauguration of John F. Kennedy, brother of her namesake. During February and April of that year she took part in space shots in the Project Mercury series. She then arrived New York 1 July 1961 for a FRAM (Fleet Rehabilitation and Modernization) overhaul in the Naval Shipyard. During this period she received the latest in antisubmarine gear, a new helicopter flight deck and hangar aft, and numerous other modifications designed to increase greatly her useful life. After emerging in her new dress in late May 1962, she underwent exhaustive shakedown out of Guantanamo Bay, Cuba, returning 26 August 1962.

Joseph P. Kennedy, Jr., with other ships of the fleet, reacted quickly to the threat of offensive missiles in Cuba, and President Kennedy's quarantine order. Sailing 22 October, the ship took an active part in the blockade which forced an easing of the crisis, and boarded Greek freighter Marucla 26 October. After participating in this graphic demonstration of the power and mobility of the modern Navy, Joseph P. Kennedy, Jr., remained on patrol in the Caribbean until returning to Newport 7 December 1962.

During 1963 the veteran destroyer carried out training operations off the Virginia Capes and Nova Scotia. She departed Newport 29 April 1964 for another Med cruise until 26 August, and in October was underway for Operation "Steel Pike I", one of the very largest amphibious operations since World War II. During the passage of the task force to the Spanish coast, she acted as antisubmarine screening ship. Joseph P. Kennedy, Jr. returned to Newport 19 November 1964.

Late in January of 1965, Joseph P. Kennedy, Jr., put to sea for Port Canaveral, Fla., where she helped qualify two newly constructed Polaris submarines for patrol over seas. There followed a regular 3-month overhaul in the Boston Naval Shipyard.

The U.S. Man In Space Program was one of Joseph P. Kennedy, Jr.'s most recent commitments; leaving Newport on November 27, 1965, the ship took station 1,200 miles southeast of Bermuda as part of the afloat recovery team for Gemini 6 and 7 on a 14-day orbital and rendezvous mission in space. The shots a success and her duty done, Joseph P. Kennedy, Jr. returned to Newport 21 December to prepare for another deployment in the Mediterranean.

Assigned to DesRon 10, Joseph P. Kennedy, Jr. departed Newport 15 February 1966 for duty with the 6th Fleet. After arriving Gibraltar 24 February, she participated during the next 4 months in AAW and ASW operations and ranged the Mediterranean from the North African coast to Turkey. She completed her peace-keeping patrols late in June and returned to Newport 8 July.

During the remainder of the year she conducted destroyer exercises and carrier screening operations off the eastern seaboard. In mid-November she participated in recovery operations following the successful 4-day flight of Gemini 12. On 1 March 1967 Joseph P. Kennedy, Jr. again sailed for duty with the mighty 6th Fleet. She cruised the Mediterranean until late April, thence transited the Suez Canal for the Red Sea and Indian Ocean. Late in June she departed the Gulf of Aden for the United States. Steaming via the Cape of Good Hope and South America, she arrived Newport the following month. There she resumed readiness training in preparation for any duty in the interest of the nation and the free world. Joseph P. Kennedy, Jr. received two battle stars for Korean service.