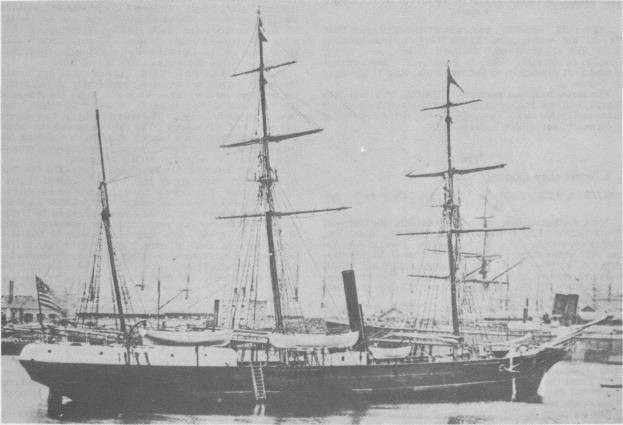 Caption: Steam Bark Jeanette at Havre, France, just prior to departure for San Francisco in 1878. 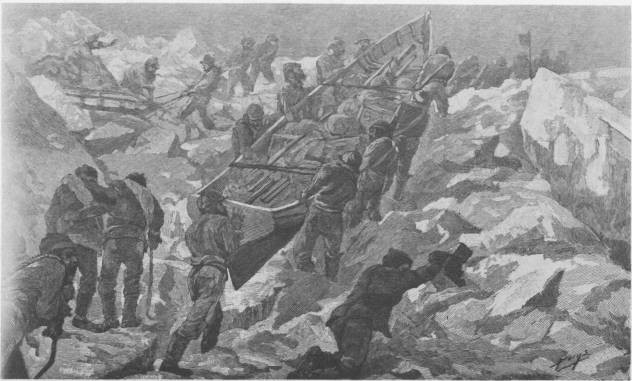 Caption: Jeanette crew members dragging their boats over the ice after the loss of their ship.

Jeannette was originally a gunboat in the Royal Navy and was purchased by Sir Allan Young for his arctic voyages. The ship was purchased under the name Pandora in 1878 by James Gordon Bennett, owner of the New York Herald; and renamed Jeannette. Bennett was an arctic enthusiast, and he obtained the cooperation and assistance of the government in fitting out an expedition to the Pole through Bering Strait In March Congress authorized the detailing of Naval officers on the voyage, and Lt. George W. DeLong, a veteran arctic explorer, accompanied Bennett to Europe to select a ship. When Jeannette was chosen and named, DeLong sailed her from Havre to San Francisco during the summer and fall of 1878.

At Mare Island Navy Yard Jeannette was fitted with the latest equipment and was considerably strengthened for northern service. She was to sail under the orders of the Navy and subject to naval laws and discipline, even though privately owned. The crew consisted of 28 officers and men and 3 civilians. The ship contained the latest in scientific equipment; and, in addition to reaching the Pole through Bering Strait, scientific observation ranked high among the expedition's list of goals.

Jeannette departed San Francisco 8 July 1879, the Secretary of the Navy having added to her original instructions the task of searching for another polar expedition long overdue in Vega. She pushed northward to Alaska's Norton Sound and sent her last communication to Washington before starting north from St. Lawrence Bay, Siberia, 27 August. The ship sighted Herald Island 4 September and soon afterward was caught fast in the ice pack. For the next 21 months the sturdy Jeannette drifted to the northwest, ever-closer to DeLong's goal, the North Pole itself. He described in his journal the important scientific records kept by the party: "A full meteorological record is kept, soundings are taken, astronomical observations made and positions computed, dip and declination of the needle observed and recorded... everything we can do is done as faithfully, as strictly, as mathematically as if we were at the Pole itself, or the lives of millions depended on our adherence to routine." In May 1881 two islands were discovered and named Jeannette and Henrietta. On the night of 12 June the pressure of the ice finally began to crush Jeannette. DeLong and his men unloaded provisions and equipment onto the ice pack and the ship sank the following morning.

The expedition now faced a long trek to the Siberian coast, with little hope even then of rescue. Nonetheless they started off for the Lena Delta hauling their boats and supplies. After reaching several small islands in the Siberian group and gaining some food and rest, they took to their boats 12 September in hope of reaching the mainland. As a violent storm blew up, one of the boats capsized and sank. The other two, commanded by DeLong and Chief Engineer George W. Melville, survived the severe weather but landed at widely separated points on the delta.

The party headed by DeLong began the long march inland over the marshy, half-frozen delta to hoped-for native settlements, and one by one the men died from starvation and exposure. Finally DeLong sent the two strongest ahead for help; and, though they eventually found a settlement, DeLong and his companions died on the Siberian tundra.

In the meantime, the intrepid Melville and his party had found a native village on the other side of the delta and were rescued. Melville then started for Belun, a Russian outpost, where he found the two survivors of DeLong's boat and induced a group of natives to go with him in search of his commander. He succeeded in finding their landing place on the Lena and recovered Jeannette's log and other important records, but returned to Belun 27 November without locating DeLong. Keeping only two of his party, Melville then turned northward once more, and finally found the bodies of DeLong and his two companions 23 March 1882. He built a large cairn over the grave of his friends, a monument which has been reproduced in granite and marble at the United States Naval Academy.

Before leaving Siberia, Melville made an attempt to find the remains of Jeannette's third boat, even though the chance of survivors was slim. He returned disappointed to Irkutsk, the capital of Siberia, 5 July 1882, almost 3 years since his departure from San Francisco in Jeannette. The results of the expedition, both meteorological and geographic, were important. Melville was rightly honored for his courage and tenacity, and the name of George Washington DeLong is enshrined forever among the ranks of the Navy's explorer heroes