The capital city of Alaska, named after the pioneer Joseph Juneau, who, with his partner Richard Harris, marked out a site on 18 October 1880 that subsequently expanded into a miners’ camp where the city now stands. 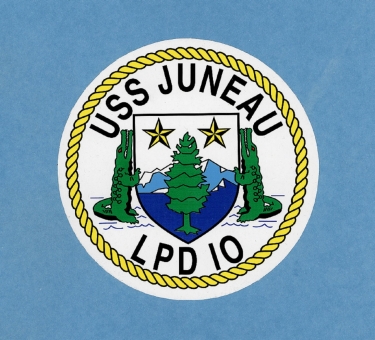 The Sitka spruce centered in the ship’s emblem is the state tree of Alaska, while in the background are the jagged peaks and snowy crest that surround the city of Juneau. The two predominant stars emblazoned at the top of the shield honor the two previous ships named Juneau, and emphasize the strong ties of those traditions that lie with them. The alligators, serving as supporters of the coat of arms, are traditional emblems of the amphibious forces. Their position indicates the juncture of land and sea to which Juneau’s capabilities represent. A length of line surrounds the insignia, which is the heraldic symbol for a naval command, and stretches unbroken to represent the unity which characterizes the crewmembers. 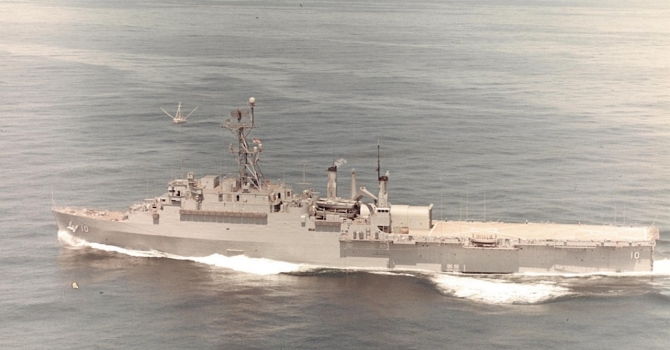 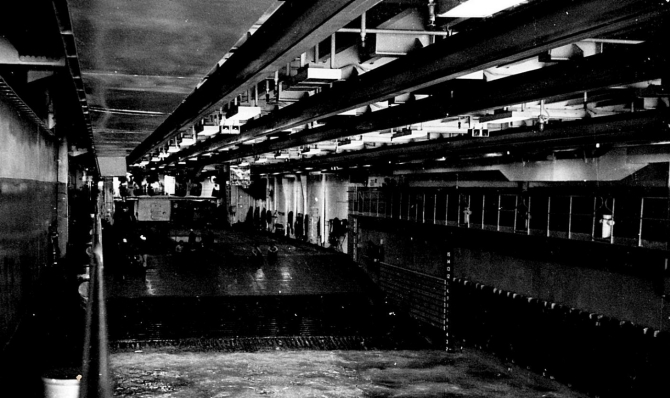 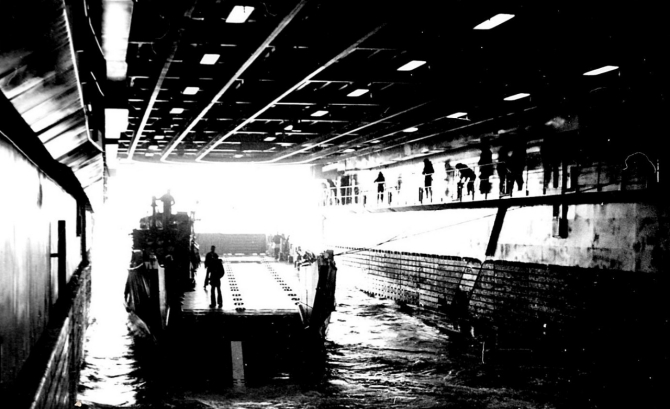 Juneau became the flagship of Amphibious Squadron 11, and then sailed from Long Beach, Calif., in company with the ships of the squadron, dock landing ship Alamo (LSD-33), amphibious cargo ship St. Louis (LKA-116), and tank landing ship Fresno (LST-1182), to the Western Pacific for her maiden deployment (1 August-11 September 1970). She sailed as part of Operation Keystone Robin Alpha, to return Marines from the fighting in South Vietnam to the United States. Juneau stopped briefly in Pearl Harbor, Hi., Okinawa, and Subic Bay, Philippines, and on 23 August moored at Da Nang, South Vietnam. She embarked Marines of the 9th Engineer Battalion and 3d Military Police Battalion, along with 312.6 short tons of heavy construction equipment, cargo, and vehicles, and sailed again the following day. Juneau refueled briefly at Okinawa, refueled from fast combat support ship Camden (AOE-2) while sailing north of the Hawaiian Islands, and then brought the Marines home.

The ship took part (20 October-17 November 1971) in the Amchitka Nuclear Test Operation. Juneau sailed from Long Beach and briefly visited Pearl Harbor while planners prepared Cannikin, an underground blast of a (slightly less than) five-megaton yield thermonuclear bomb on Amchitka Island, Alaska. The Atomic Energy Commission oversaw the operation, which was designed to test a warhead for an LIM-49A Spartan Anti-Ballistic Missile (ABM), as part of the Safeguard Program, an ABM system. Juneau operated between Hawaii and Alaska for nearly a month before the United States detonated the bomb at 1100 on 6 November. Juneau then returned to Long Beach.

Marine McDonnell Douglas AV-8A Harriers operated with Juneau for the first time while she sailed in Okinawan waters (6-7 February 1976). The ship recorded 55 Harrier landings and take-offs. Juneau, with men of the 1st Battalion, 5th Marines, embarked, celebrated the United States' Bicentennial celebrations in Juneau, Alaska (2-6 July 1976). The ship’s historian observed that the people of her namesake city gave “a real frontier welcome to their newly-adopted sons.”

Tanker Exxon Valdez ran aground on Bligh Reef in Prince William Sound, Alaska, at 1204 on 24 March 1989. The resulting catastrophic oil spill required massive clean-up efforts, and Navy ships and aircraft supported environmental remediation operations. Juneau sailed from San Diego on 18 April, and embarked civilian responders and loaded their support equipment at Valdez, Alaska (24-25 April). The ship then acted as the command and control center for Joint Task Force Alaska, that oversaw the military’s support of the operation. Juneau also provided berthing, communications, food, medical care, and laundry services for more than 400 embarked civilian workers. Three CH-46E Sea Knights from Marine Medium Helicopter Squadron (HMM) 166, and nine mechanized landing craft (LCMs) from Durham (LKA-114), Mobile (LKA-115), and the Naval Amphibious Base, Coronado, Calif., transported the clean-up crews to their work sites each day. Juneau’s Air Department controlled over 200 civilian helicopter landings on board the ship, and monitored the “heavy volume” of air traffic by small sea planes, and military and private helos. Vice President James D. Quayle visited the ship at one point and applauded the crew’s efforts. Amphibious transport dock Cleveland (LPD-7) relieved Juneau on 31 May, and she visited her namesake city (2-6 June), before returning to San Diego on 12 June.

Juneau moored at Pier K-7 at Pearl Harbor and onloaded stores (8-10 December), before she continued on her voyage. TG 36.0 became TG 176.0 when the ships passed from the Third Fleet to the Seventh Fleet on 17 December. Juneau detached one day early and completed repairs at Riviera Pier at Subic Bay, Philippines (26 December 1990-2 January 1991). She sailed through the Strait of Malacca on 6 January 1991, and anchored at Al Masirah Airhead, Oman, on 15 January. The Bell AH-1J Sea Cobras of Marine Attack Helicopter Squadron (HMA) 773 embarked two days later. The ship anchored off Ras-Al-Madrakah, Oman (24-25 January), and then took part in an allied exercise, Sea Soldier IV. She sailed through the Strait of Hormuz (3 February), and the following day the Sea Cobras detached to Tripoli. The ship accomplished an availability at Dubai Drydock Shipyard, United Arab Emirates (UAE) (5-16 February).

A tropical cyclone devastated the Bangladeshi coast, killing more than 138,000 people and rendering nearly 10 million homeless (29-30 April 1991). Juneau visited Port Zayed (30 April-4 May), but received orders to make for the Bay of Bengal to take part in Operation Sea Angel, humanitarian assistance to the victims of the tragedy. She sailed on 5 May, refueled from Military Sealift Command (MSC) manned oiler Passumpsic (T-AO-107) on 6 and 13 May, and anchored off the Bangladeshi coast as the primary control ship for displacement craft (15-27 May). She replenished from Passumpsic again on 24 May, and on 28 May came about to continue her voyage home. She transited the Strait of Malacca on 2 June, loaded stores at Subic Bay (6-8 June), entered the Third Fleet on 15 June, visited Pearl Harbor on 21 June, and offloaded RLT 5 while anchored off Del Mar Boat Basin, near Camp Pendleton, Calif., on 29 June. Following Juneau’s homecoming to San Diego, the ship offloaded the Broncos on 2 July.

Juneau shifted home ports when she relieved forward deployed amphibious transport dock Dubuque (LPD-8) at Sasebo, Japan, on 30 July 1999. Juneau sailed from Sasebo on 14 January 2006, and joined Task Force (TF) 76 for Balikatan 06, a joint training exercise with the Filipinos. The term ‘Balikatan’ translates roughly as “shouldering the load together” in Tagalog. She embarked Marines of the 31st Marine Expeditionary Unit (MEU) at White Beach Naval Facility, Okinawa (19-21 January), and rendezvoused with the other ships of the Forward Deployed Amphibious Ready Group, amphibious assault ship Essex (LHD-2) and dock landing ship Harpers Ferry (LSD-49). While they operated in the Philippine Sea on 17 February, heavy rain caused wide-spread flooding on Leyte Island in the Philippines, triggering a landslide that swept away most of the farming village of Guinsahugon and two nearby hamlets.

The group came about and Juneau loaded reinforcements and supplies at Guam (10-12 February). They then sailed around the Philippines into the South China Sea, and offloaded some of the equipment at Subic Bay on 18 February. Guided missile destroyer Curtis Wilbur (DDG-54) meanwhile rendezvoused with TF 76. The ships resumed their voyage the following day, crossed the Celebes and South China Seas, and then supported Joint Task Force-Philippines (JSOTF-P) while operating from the Celebes Sea (21 February-3 March). McDonnell Douglas C-9B Skytrain IIs of Fleet Logistics Support Squadrons (VRs) 59 and 61 also delivered humanitarian supplies to victims of the disaster. 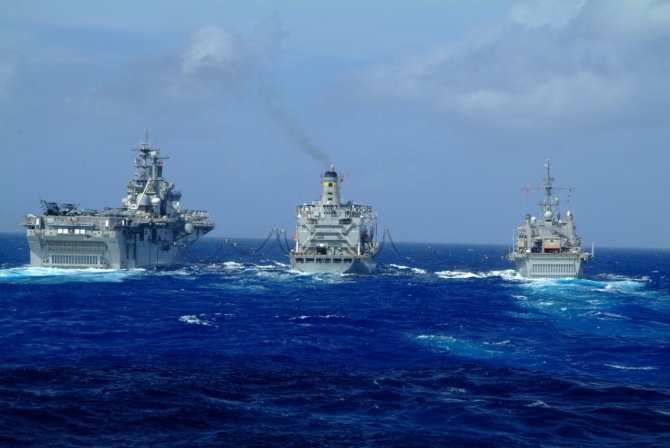 Juneau detached from the group and assisted people in and near Panamao on Jolo in the Philippines (22 February-2 March). Every morning, Marine CH-46E Sea Knights lifted 27 Navy and Army doctors, dentists, medical technicians, and veterinarians from Juneau into Panamao. The sailors and soldiers paired with 24 Armed Forces of the Philippines doctors and medics, and treated a total of 11,373 people and 504 animals, providing primarily pediatric, optometric, pharmaceutical, veterinarian, and minor surgery services. In addition, Marine engineers built four three-room elementary schools: one in Jolo City, two in Panamao, and one in Maimbang. The Sea Knights returned the Americans to the ship each night. Juneau offloaded her Marines at White Beach on 8 March, and on 14 March returned to Sasebo. The ship operated (28-31 January 2000) as part of International Force East Timor in Operation Stabilise, humanitarian assistance to people displaced by internecine fighting in East Timor. 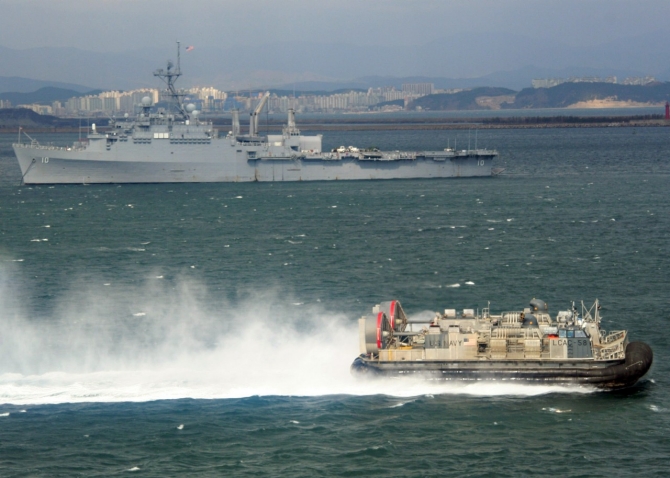 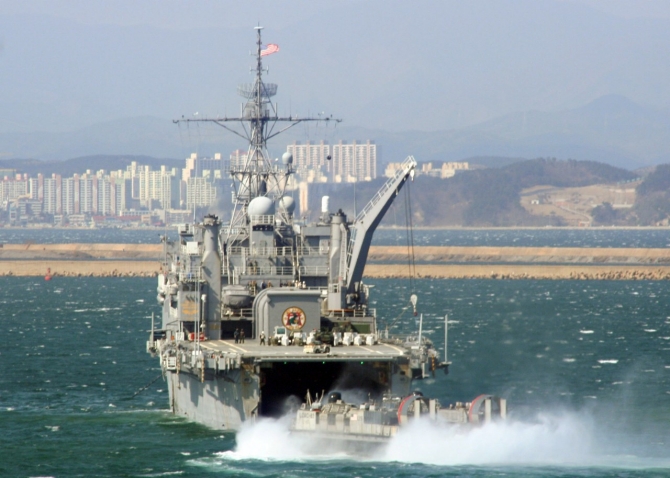 Cyclone Nargis caused widespread flooding along the Irrawaddy Delta and the coast of Myanmar (Burma), on 2 May 2008. International ships that rushed to the area as part of Joint Task Force Caring Response included Essex, Juneau, and Harpers Ferry, with Marines of the 31st MEU embarked. The U.S. ships left some of their aircraft behind in Thailand, and on 13 May arrived off the Myanmar coast. The country’s ruling junta stymied overtures, however, and on 5 June, Adm. Timothy J. Keating, Commander Pacific Command, directed the ships to come about. The following day, two Marine Lockheed C-130 Hercules flew 70 UN relief tents from Medan, Indonesia, to Thailand, from where aid workers shipped the tents and other vital supplies to the victims of the cyclone.