John Lesslie Hall, Jr., born in Williamsburg, Va., on 11 April 1891, to Dr. John L. and Margaret F. (Farland) Hall, attended Williamsburg High School and William and Mary College in Williamsburg, before entering the U.S. Naval Academy, Annapolis, Md., on 17 June 1909. As a midshipman, Hall lettered in football, baseball, and basketball. As a first classman, he served as President of the Midshipmen’s Athletic Association and received the Navy Athletic Association Sword for general excellence in sports. He graduated and was commissioned as an Ensign on 7 June 1913.

Hall was detached from Philip and served as the assistant engineer officer on board Pennsylvania (Battleship No. 38) for three months (January–March 1919), and then (April–November 1919) helped with the fitting out Dahlgren (Destroyer No. 187). Detached before she was commissioned, Hall joined Schenck (Destroyer No. 159) as her executive officer. He briefly (29 September–5 October 1920) assumed command of Schenck (redesignated DD-159 on 17 July 1920), and following that tour became an instructor at the Naval Academy (5 October 1920–23 May 1922).

Following his return to the United States, Hall attended the Senior Course at the Naval War College, Newport, R.I. (26 June 1937–14 May 1938). He then shifted roles at the college and served as a member of that institution’s staff (14 May 1938–18 May 1940). Capt. Hall commanded battleship Arkansas (BB-33) (3 June 1940–28 April 1941). He continued his service with the Atlantic Fleet and reported (3 May 1941) to battleship Texas (BB-35) as an aide and operations officer on the staff of Commander Battleship Division (BatDiv) 5. Hall served briefly (8–30 May 1942) on the staff of Commander Cruiser Division (CruDiv) 7, followed by a tour as chief of staff and aide to Commander Battleships, Atlantic Fleet (9 June–5 September).

The admiral followed these assignments by taking command of Sea Frontier Forces, Western Task Force (4 February 1943, re-designated as the Moroccan Sea Frontier on 17 February), as well as serving as the Commandant Naval Operating Base Casablanca. Hall received the Distinguished Service Medal for preventing sabotage during the U.S. occupation of Casablanca, Fedala (Mohammedia), Port Lyautey (Kenitra), and Safi. “His tireless energy, proficient leadership and unyielding devotion to duty contributed to the successful accomplishment of a highly important objective…” He re-established the services of these ports, which supported the Allied advance across North Africa, removed merchant ships that blocked the harbors, and salvaged U.S. vessels damaged during the landings.

Also in February 1943, he was transferred to duty as Commander Amphibious Force, Northwest African waters. Hall received the Legion of Merit for “exceptionally meritorious conduct” in that command during Operation Husky, the invasion of Sicily (9 July–17 August 1943). “The excellence of detailed plans and training operations conducted under his capable leadership contributed materially to the successful landing executed on hostile shores by the Task Force under his command, operating jointly with the forces of the United States Army. His inspiring devotion to the accomplishment of an important and hazardous mission reflects great credit upon him and his command.” Hall continued in charge of important components of Operation Avalanche, the invasion of the Italian mainland (3–16 September).

He sailed from North Africa for England in November 1943 to assume command of the Eleventh Amphibious Force in preparation for Operations Neptune/Overlord, the invasion of Normandy, France. During the landings (6 June 1944), he commanded Amphibious Force O, which landed the U.S. Army’s V Corps, comprising the 1st and 29th Infantry Divisions, on Omaha Beach. Hall received the Distinguished Service Medal for carrying out “the assault against enemy opposition on the coast of Normandy with great skill and determination. He landed [the soldiers and sailors] on selected beaches against determined enemy opposition. The execution of this operation and the previous planning thereafter contributed greatly to the successful assault of the First United States Army on the Beaches in the Vierville-Colleville Area.” 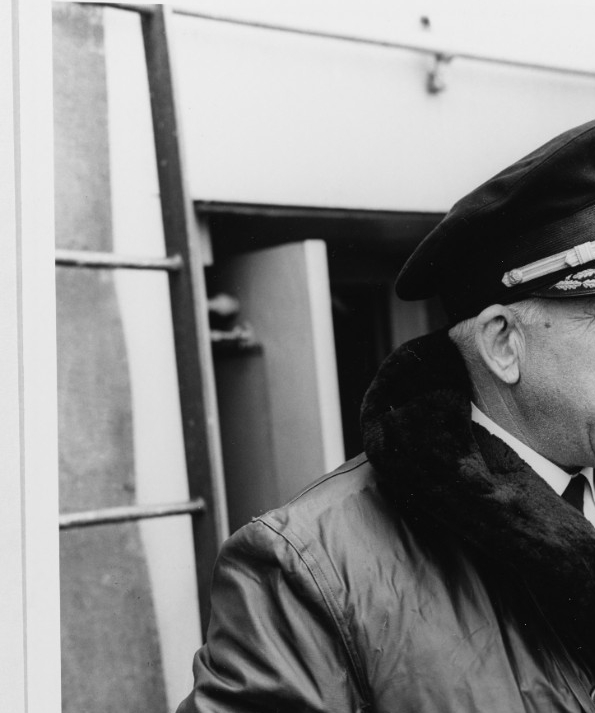 Following the Normandy landings, Hall was designated Commander Amphibious Group 12, Amphibious Forces, Pacific Fleet (29 October 1944). He received the Distinguished Service Medal for his role in Operation Iceberg, the invasion of Okinawa in the Ryūkyū Islands (1 April–10 June 1945), for “expertly directed the landing of assault troops and equipment on the beach and the devastating gunfire of his ships against assigned objectives despite incessant attacks by hostile suicide boats and aircraft. Effectively synchronizing his surface and air units in dispersing enemy troop concentration and in the destruction of gun emplacements, defense installations and aircraft, he was in large measure responsible for the success of his Task Force in reducing Japanese resistance and in providing effective support for our ground forces as they advanced against tremendous odds to capture this vital stronghold…”

“He was a giant of a man…huge…tall,” Dr. Susan H. Godson, Hall’s niece, recalled. “He had an overwhelming dignity about him, befitting an admiral, but at the same time he had great humility and an extraordinary gentleness. His hands looked like large bear paws, but he was as gentle as a lamb with children and spent the last years of his life caring for his invalid wife [Beall].” John L. Hall, Jr., died at Scottsdale, Arizona, on 6 March 1978.

The colors of the chevron in the center of the lower portion of the shield are blue and gold. The three blue chevrons symbolize the three assault landing invasions in which Adm. Hall’s outstanding leadership abilities contributed toward a successful conclusion. The top blue chevron is pointing in the direction of the embattled area which is red. This represents the penetration of fortified land areas from the sea. The stars denote the admiral’s rank. 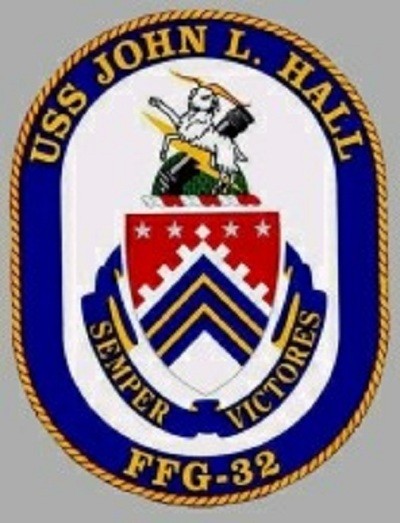 The colors blue and gold are traditional to the U.S. Navy and further allude to two awards of the Navy Distinguished Service Medal to Adm. Hall; red and white refer to two awards of the Legion of Merit. The rampart heraldic goat refers to the Naval Academy where Hall began his career. The naval cannon, along with a lightning bolt symbolizing electronic communications, allude to Hall’s concept of cross-training Navy gunners and Army artillerymen so that his ships carried out their call-fire missions in direct support of troops fighting ashore. The heraldic mount in base represents the land areas upon which Hall’s assault landing concepts proved so successful in the Mediterranean, Atlantic, and Pacific theaters. 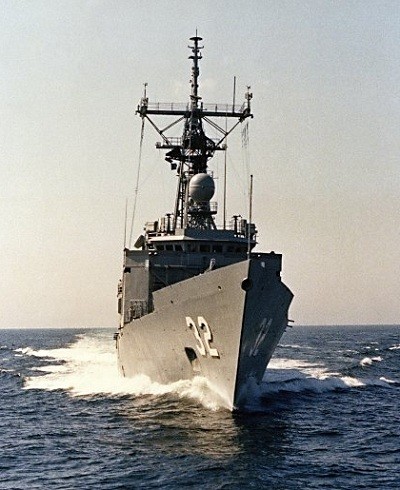 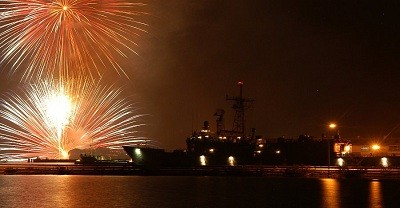 While John L. Hall conducted surveillance operations in the vicinity of Havana, Cuba, she detected a Soviet surface action group (SAG), consisting of guided missile destroyer Otlichnyy (DDG.403), guided missile frigates Razitelnyy (FFG.804) and Zadornyy (FFG.937), replenishment oiler Dnestr (AOR.615), and a Cuban Koni class frigate (FF.356), sail from the harbor (18 January 1986). John L. Hall came about and tracked the SAG as the East Bloc ships steamed into the Gulf of Mexico. She passed through the Old Bahama Channel in close surveillance of the SAG (22 January), and the following day transited the Crooked Island Passage as the Soviets headed in a southerly direction.

The SAG anchored in Cienfuegos, Cuba (25 January 1986), and during the afternoon watch, John L. Hall refueled from Military Sealift Command-operated oiler Mississinewa (T-AO 144). The Soviet ships returned to sea and John L. Hall shadowed them until they anchored off Banco de Jardinillos, Cuba, the following day. Guided missile frigate Samuel Eliot Morison (FFG-13) relieved John L. Hall on 28 January. Her busy deployment included a final success as the ship sailed through the Yucatan Channel and gained an identification friend or foe (IFF) contact on an aircraft suspected of smuggling narcotics. She relayed the information to Commander Task Group 24, and the authorities apprehended the smugglers when they landed in the United States.

John L. Hall, with a Coast Guard Tactical Law Enforcement Team (TACLET) embarked, deployed for counter-narcotics operations in the southern Caribbean (6 July–22 August 1987). The ship responded to a search and rescue call from a Colombian fishing boat that ran aground off the coast of Nicaragua (18 July). U.S. authorities suspected the boat of smuggling narcotics, and John L. Hall made full speed for the area. When she arrived at the scene, 18 hours later, the ship sent away her TACLET, who boarded the vessel and discovered enough marijuana residue to arrest the three crewmembers. John L. Hall subsequently rendezvoused with Colombian guided missile frigate Caldas (FM.52) and transferred her prisoners. 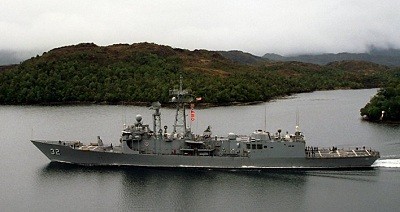 When Al-Qaeda terrorists attacked the United States on “9/11” (11 September 2001), John L. Hall had just returned from a voyage to Northern European waters (1 April–21 August), and most of her crew were on post-deployment leave. The ship initiated an emergency recall of her sailors, and she then (18–19 September) put to sea to serve as an offshore radar defense station and monitored air traffic with the North American Aerospace Defense Command (NORAD) as part of Operation Noble Eagle, the defense of the United States.

An SH-60 Seahawk from HSL-48 Detachment 2, embarked on board John L. Hall, coordinated with maritime patrol aircraft and Coast Guard cutter Diligence (WMEC-616), and intercepted a 40 foot go-fast vessel in the Caribbean (28 January 2003). The four smugglers scuttled their boat upon capture, but the combined Navy-Coast Guard team recovered 4,265 pounds of cocaine with an estimated street value of $130 million.

Hurricane Katrina made landfall along the coast of the Gulf of Mexico (29 August 2005). A catastrophic storm surge inundated the levees along the Mississippi River and the rising waters flooded 80% of New Orleans, La. John L. Hall and guided missile frigate Stephen W. Groves (FFG-29) emergency sortied from Pascagoula, Miss., to Mayport, Fla., to escape the devastating storm. The following month (8 September), they sortied again to escape Hurricane Ophelia, and rode out the tempest at Pensacola, Fla., before returning to Mayport.