Harry Bean Jarrett, born in Valley Forge, Pa., on 12 October 1898, son of Winfield Scott and May [Rowan] Jarrett, received his early education from Valley Forge Grammar School and Phoenixville High School (both in Pa.), and the Wilmer and Chew Preparatory School, Washington, D.C. He entered the U.S. Naval Academy, Annapolis, Md., from the Fifth Congressional District of West Virginia in 1918. As a midshipman, Jarrett participated in baseball and soccer, and as a member of the Hop Committee, which, the academy’s Lucky Bag yearbook noted, ensured that the regimental hops (dances) and June Ball preserved “their reputation for color and picturesqueness.” He graduated and was commissioned an ensign on 3 June 1922.

Jarrett made a six-month voyage on board heavy cruiser Rochester (CA-2), flagship of Destroyer Squadrons, Atlantic Fleet, and continued to serve in that ship while she operated with the Special Service Squadron in the Caribbean. During that cruise, Rochester patrolled the Honduran coast during a revolution that imperiled Americans in that country in early 1923. He completed training in submarines at the Submarine School, New London, Conn. (January–June 1925), then served as engineer officer in submarine R-19 (SS-96), based at Pearl Harbor, T.H., during which tour he wed Mary Ward Dunn, of Europa, Ms., at Honolulu, T.H., on 7 May 1927.

In June 1927, he returned to the Naval Academy for instruction in diesel engineering at the Postgraduate School, completing the course at Columbia University, N.Y., from which he received the degree of Master of Science, in October 1929. Jarrett then served as the engineer officer successively in submarines S-23 (SS-128) and the new V-5 (SC-1) (later renamed Narwhal and re-designated as SS-167), and for the two subsequent years as engineer and repair officer of the Submarine Base at Coco Solo, Panama Canal Zone.

He commanded submarine S-14 (SS-119), based in the Canal Zone in October 1934, and sailed the boat to the Philadelphia Navy Yard, Pa., where she was temporarily decommissioned (22 May 1935). Jarrett followed that assignment with a tour as the assistant engineer of heavy cruiser Northampton (CA-26) on the west coast. He returned to the Naval Academy as a discipline officer (June 1937–December 1939), and in that capacity made a midshipman cruise on board battleship New York (BB-34) to European waters during the summer of 1938.

Jarrett oversaw the fitting out of the new destroyer Morris (DD-417) from December 1939, and placed her in commission at Norfolk, Va., on 5 March 1940. He commanded her through the period in which she served in the Atlantic during 1941. He received the Navy Cross for his heroism during the Battle of the Coral Sea on 8 May 1942, when he placed Morris alongside the mortally damaged Lexington (CV 2) despite the violent explosions and raging fires gutting the carrier, to embark a considerable number of her crew.  “His gallant initiative and inspiring leadership in a perilous emergency,” his citation explained, “contributed materially to the reduction of…casualties and the rescue of many survivors who might otherwise have perished.” Within a month’s time, he fought Morris in the Battle of Midway in June 1942 when she served in the screen of Yorktown (CV-5), after which he returned stateside to reprise his role as a discipline officer at the Naval Academy (August 1942–November 1943).

He assumed command of Destroyer Squadron 53 the following month (December 1943–June 1945), and as such saw action against the Japanese at Kwajalein, Saipan, Tinian, and Guam, as destroyer screen commander for convoy escort and shore bombardment. During the latter period of that assignment (from August 1944), he commanded Task Groups (TGs) 58.8 and 38.8, subsequently leading the picket line for a thrust toward Tōkyō, and during the fighting against enemy kamikaze [suicide planes] off Okinawa. He received the Silver Star for “conspicuous gallantry and intrepidity” in command of the squadron for his actions during the fighting at Palau (9–14 September 1944); Luzon, Philippines (21–22 September); and the Ryūkyū Islands and Formosa (Taiwan) (6–14 October). Jarett was awarded the Bronze Star for his part in the battles in the vicinity of Nansi Shoto [islands] and Tōkyō (10 February–1 March 1945).

Returning to the west coast in June 1945, he led the Underway Training Unit at San Diego, Calif. He then (November 1946–September 1947) commanded light cruiser Astoria (CL-90) in the Pacific Fleet, transferring to serve as chief of staff and aide on the staff of Commander Training Command, Atlantic Fleet (October 1947–July 1949). Jarrett then reported as plans and policy officer, Naval Reserve, Chief of Naval Operations (CNO) (August 1949–August 1950), followed by serving as the U.S. Senior Military Attaché, Formosa (Taiwan) (July 1950–November 1951). Returning to the United States to work in the CNO’s office for a month, he then commanded Destroyer Flotilla 4 (15 December 1951–April 1952), transferring to lead Cruiser Division 4. Jarrett served as Deputy Naval Inspector General, Washington, D.C., during his final tour until he retired (February 1953–1 November 1954).

Vice Adm. Jarrett died on 9 April 1974, and is buried at the Naval Academy Cemetery. 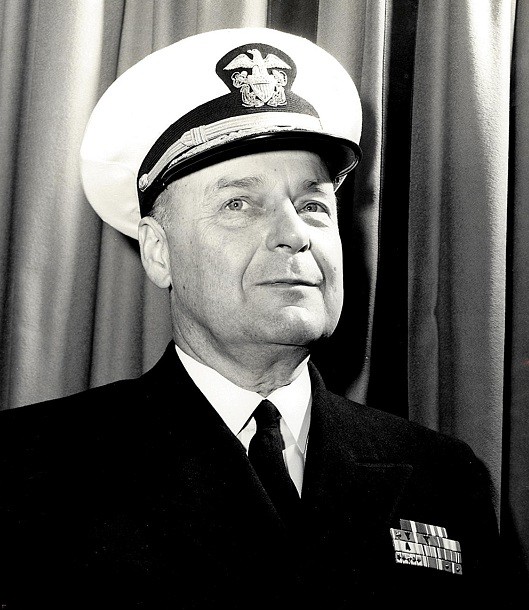 The sea-griffin grasping a cannon alludes to Jarrett’s command of bombardment groups in the Pacific during World War II, and is placed within a ring symbolizing his command of destroyer screens for fast carrier task forces. The three stars refer to his final rank as a vice admiral. 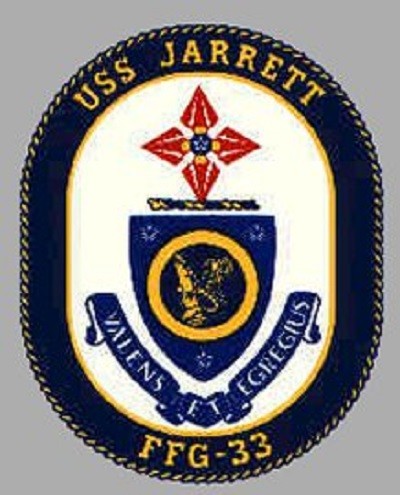 The cross refers to the Navy Cross he received for his heroism during the Battle of the Coral Sea. The pheon allude to the multidirectional fire power of the destroyer screens and bombardment groups he led, and reflect the Legion of Merit he was awarded for his leadership of destroyer fire support during the battles later in the war. The two stars on the disc symbolize his personal heroism, for which he received the Silver Star and the Bronze Star.

Valens et egregius, which is translated from the Latin as “able and excellent.”

During a deployment to the Western Pacific, Indian Ocean, and Persian Gulf (12 May–12 November 1987), Jarrett, Cmdr. Leslie S. Blankinship in command, took part in Operation Earnest Will, an operation to maintain freedom of navigation within the Persian Gulf, that included renaming and reflagging 11 Kuwaiti tankers. During the ‘Tanker War’ between the Iranians and Iraqis, the Iranians utilized 1,662 ton former South Korean roll-on, roll-off vessel Iran Ajr, Lt. Cmdr. Parviz [Mohammad] Farshchiyan in command, to lay mines to cut the sea lanes to Iraq.

Iran Ajr stopped overnight on 21 September 1987, at a two-towered rig named Rashadat in the Rastam gas-oil separation platform (GOSP) complex, 120 miles east of Bahrain. The rig had been shut down for almost two years following Iraqi discovery that the Iranians used Rashadat for radar tracking of ships and for launching small boats. Iran Ajr turned toward the tanker routes, but just before midnight three Army helicopters, consisting of a Boeing MH-6 Little Bird and a pair of AH-6 Sea Bats of the 160th Special Operations Aviation Regiment (Airborne), at least one of the helos flew from Jarrett, surprised the minelayer 50 miles northeast of Bahrain.

President Ronald W. Reagan later announced that Iran Ajr posed “a direct threat to the safety of U.S. warships and other U.S.-flag vessels.” The Iranian ship began to lay mines in an area where Middle East Force (MEF) flagship La Salle (AGF-3) sailed, and when reporters afterward queried Rear Adm. Harold J. Bernsen, Commander MEF, about the Iranians’ intent to sink the flagship he replied, “Absolutely.” At 2302 therefore, the Army helos announced “inbound hot” and attacked the Iranian ship into the mid watch, damaging her with 2.75 inch rockets and 7.62-millimeter machine gun fire, and killing at least four crewmen.

The two helicopters refueled on board Jarrett and lifted off, equipped with AGM-114 Hellfire air-to-ground missiles. Battleship Missouri (BB-63) operated a Pioneer UAV, Inc., RQ-2A Pioneer remotely piloted vehicle (RPV) subsequently designated an unmanned aerial vehicle (UAV) that helped the battleship direct her naval gunfire support of the troops fighting ashore. Crewmen launched the Pioneer with the assistance of a rocket-powered booster, and recovered the aircraft by utilizing a net strung between two cables on the fantail. The vehicle transmitted images to shipboard TV monitors that enabled men to “walk” rounds onto their targets. The Pioneer revealed that at least one Iraqi missile survived the second bombing, and one of the Kiowas launched a Hellfire that destroyed the Silkworm.

Jarrett passed through areas swept clear of mines off the Kuwaiti coast and joined British destroyer Gloucester (D.96) and frigate London (F.95) while they protected Missouri as the battleship shelled enemy troops ashore. An Iraqi battery at al-Fintas fired two Silkworms at the formation of allied ships, at 0452 on 25 February 1991. One of the Silkworms splashed into the sea shortly after the Iraqis launched it, but the other missile hurtled toward Missouri at 605 knots and a height of 375 feet above the water. The U.S. and British ships tracked the incoming missile on their radar, and Jarrett and an airborne Seahawk launched chaff (thousands of thin, radar-deflecting metal strips), torch (flares), and ducks (multiple decoys) to confound the missile’s guidance. Gloucester shot down the missile with two Sea Dart surface-to-air missiles. Missouri launched a Pioneer that discovered the Iraqi Silkworm battery and the battleship fired about 30 16-inch rounds and knocked out the battery. After the cease fire, Jarrett escorted merchant ships through “mine danger areas” (1 March–14 April). 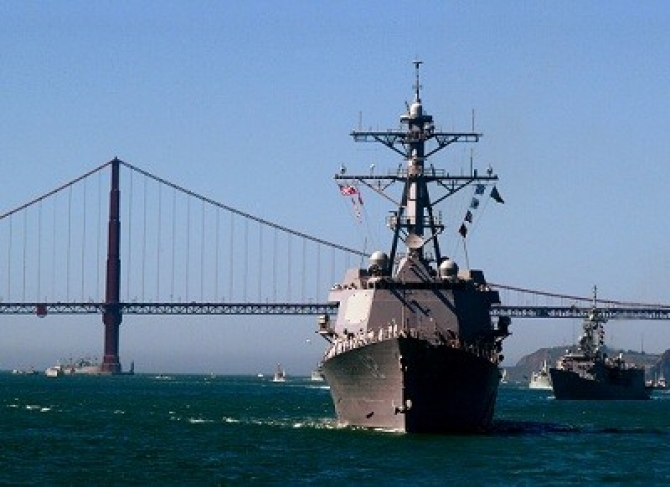 The ship, with HSL-49 Detachment 3 and Pacific Tactical Law Enforcement Detachment 101 embarked (followed by 107), sailed on a counter-narcotics deployment to the Eastern Pacific (11 May–19 October 2009). Her operations resulted in the seizure or disruption of the smuggling of over nine tons of narcotics with an estimated street value of $266 million.