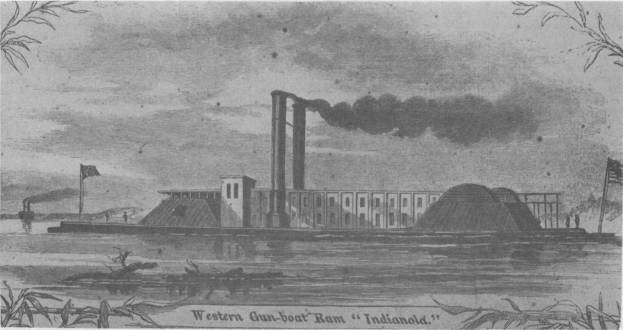 Indianola, an ironclad gunboat propelled by both side wheels and screw propellers, was built at Cincinnati by Joseph Brown. The danger that Confederate Gen. Kirby Smith, whose troops had reached Covington, Ky., just across the Ohio River, would capture Cincinnati, prompted Brig. Gen. Lew Wallace to take Indianola, from the contractor before completion 2 September 1862 and have her launched 2 days later. Acting Master Edward Shaw was placed in command of the ship 18 September, and she was reported in commission 9 days later.

Indianola was "armed and ready to defend Cincinnati" 23 October but was not completed. When ready for general service several weeks later, the water level in the Ohio had fallen too much for her to get over the falls at Louisville. She finally arrived at Cairo, Ill. and joined the Mississippi Squadron 23 January 1863. She served briefly in the Mississippi and the Yazoo Rivers before running past the Confederate batteries at Vicksburg to join Queen of the West in an effort to stop the Confederate flow of supplies from the Red River.

She left her anchorage in the Yazoo at 10:15 p.m. 13 February and moved slowly down stream until the first gun was fired at her from the Vicksburg cliffs slightly more than an hour later. She then raced ahead at full speed until out of range of the Confederate cannon which thundered at her from above. She anchored for the night 4 miles below Warrenton, Miss., and early the next morning got underway down river.

Two days later, 16 February, Indianola met prize steamer Era No. 5 manned by the survivors of Queen of the West which had run aground while under heavy fire from Confederate shore batteries at Gordon's Landing in the Red River. Late that afternoon lookouts in Indianola spotted Confederate steamer Webb abreast Ellis Cliffs. She promptly cleared for action and steamed ahead full speed firing at the Southern ship which proved to be barely out of range. Webb turned about and dashed down stream and out of sight around a bend in the river. A heavy fog set in compelling Indianola to give up the chase and anchor for the night. Early the next afternoon the fog cleared enabling Indianola to proceed to the mouth of the Red River where she maintained a strict blockade until 21 February when she began steaming upstream. Her progress was slowed by two coal barges which she towed so that she might furnish fuel to any ships sent to reinforce her from above Vicksburg. On the evening of 24 February TFe66 and Queen of the West, now Confederate-manned, overtook Indianola and attacked from each side ramming her seven times before the game ironclad, "in an almost powerless condition" ran her bow on the west bank of the river and surrendered.

The loss of Indianola was deeply distressing to the Union. It ended Admiral Porter's efforts to blockade the Red River by detached vessels while keeping the body of his fleet above Vicksburg, and it prompted Farragut's costly run by the South's forts at Port Hudson 14 March 1863. On the brighter side, it set the stage for one of the most successful hoaxes of the war. A dummy monitor was made by building paddle boxes on an old coal barge to simulate a turret which in turn was adorned with logs painted black to resemble guns. Pork-barrel funnels containing burning smudge pots were the final touch added just before the strange craft was cast adrift to float past Vicksburg on the night of Indianola's surrender, Word of this "river Monitor" panicked the salvage crew working on Indianola causing them to set off the ships magazines to prevent her recapture.

After Vicksburg fell, and following long and difficult struggle, Indianola was refloated 5 January 1865 and towed to Mound City 17 January where she was sold.