Duncan Nathaniel Ingraham was born in Charleston, S.C., on 6 December 1802. He was appointed a midshipman on 18 June 1812 at the age of 10 and, following his distinguished service, was commissioned a captain on 14 September 1855. While in command of sloop-of-war St. Louis in the Mediterranean, in July 1853, he interfered at Smyrna when the Ottoman Turks permitted the Austrian consul to detain Martin Koszta, a Hungarian who had declared in New York his intention of becoming an America citizen, and, who had been seized and confined in irons on board Austrian brig Hussar. The Austrians and Turks counted more ships and guns -- both afloat and ashore -- than Ingraham and St. Louis, but he resolutely readied his ship for action and Ingraham’s determination, combined with the tense negotiations between the U.S. and Austrian and Turkish officials, led to Koszta’s release. For Ingraham’s conduct in this matter the Congress voted its thanks to the daring officer and awarded him a medal. Ingraham served as Chief of the Bureau of Ordnance and Hydrographer of the Navy from 1856 until 1860. He resigned from the Navy on 4 February 1861 to enter the Confederate States Navy with the rank of captain, serving as Commandant of the Charleston station, from 1862 to 1865. Ingraham died at Charleston on 16 October 1891.

Mount Pinatubo, a volcano located on Luzon in the Philippines, erupted on 12 June 1991. The mountain’s fury blackened the skies across Angeles City and much of Luzon for nearly 36 hours. Typhoon Yunya added to the devastation when it slammed inland with fierce winds and rain. The rain eventually cleared the atmosphere of most of the choking and blinding ash, but the disaster deposited a heavy eight-inch coating of grey ash over much of the area around Naval Station (NS) Subic Bay and Naval Air Station (NAS) Cubi Point. Sailors observed that the residue gave the landscape the appearance of dry cement. The ash crushed many lightweight structures, and a chalky film covered the bay, which presented the appearance of a translucent shade of green. The disaster cut electricity and water to the base for two days, and only heavy trucks could grind their way through the morass to reach victims. Rescue workers also contended with earthquake aftershocks. The volcanic eruption and the typhoon killed more than 300 people and displaced more than 300,000 victims.

Abraham Lincoln sailed more than 1,800 nautical miles through inshore waters during Fiery Vigil. This voyage required careful attention to detail from her Navigation Department because of the myriad of other vessels, treacherous shoals, and currents. The carrier also supported Lake Champlain (CG-57) while the guided missile cruiser evacuated a further 844 people and their pets during three trips in and out of the disaster area. Lake Champlain’s historian noted that the devastation and the suffering of the victims “overwhelmed” her crewmen. Additional squadrons that assisted humanitarian efforts included Strike Fighter Squadron (VFA) 94, Composite Squadron (VC) 5, and Helicopter Anti-Submarine Squadron Light (HSL) 47.

Thousands of Filipino looters magnified the tragedy when they climbed over the gates and ransacked abandoned homes. The mob overwhelmed military policemen by sheer numbers and determination. In many instances, the looters wiped out treasured mementoes of families.

Sailors on board guided missile destroyer Hopper (DDG-70) reported seeing IT2 Menelek Brown of the ships company at 0430 on 3 January 2008, but Menelek failed to muster at 0730 that morning, while the ship was carrying out maritime security operations in the Arabian Sea. Crewmembers unsuccessfully searched the destroyer for their shipmate, and Hopper sounded “man overboard.” At 1505 the ship commenced a coordinated search of the surrounding area with guided missile cruiser Port Royal (CG-73) and Ingraham. A Lockheed P-3C Orion assisted the ships as they conducted an “expanding square” search from the position 18°26ˈ21̎N, 63°53ˈ35̎E, but they ended their search the following day without finding Brown.

Hopper led Port Royal and Ingraham (in that order) in column through the Strait of Hormuz into the Arabian Gulf, beginning their passage at 0334 on 6 January 2008. The Iranian Coast Guard routinely queried the three ships at 0615, and the Americans responded professionally and continued their voyage. At 0800, however, five Iranian speedboats, likely operated by the Islamic Republic of Iran Revolutionary Guard Navy (IRGCN), dangerously closed the column at high speed from off Hopper’s starboard bow. The Iranians split up into two groups in an apparent attempt to flank the U.S. ships. Three of the speedboats hovered ominously while the other two boats crossed Hopper’s bow and passed down her port side at about 200 yards, came about, and plunged toward the destroyer a second time at high speed. The Americans blared horns and whistles and radioed the revolutionaries: “You are straying into danger.” Capt. David B. Adler, Port Royal’s commanding officer, observed that one of the Iranian boats appeared to have a weapon mount though “it was just too far away to tell.”

The IRGCN dropped white box-like objects into the water, closed, and then came about. The ships continued on but did not retrieve the boxes for identification, and exited the strait at 1130. Some officers suspected the Iranians of practicing mining the strategic waterway. “Mining in international waters is an act of war,” Rear Adm. R. Guy Zeller, who had commanded the Enterprise (CVN-65) Carrier Battle Group during Operation Praying Mantis, strikes against the Iranians on 18 April 1988 in retaliation for the mining of guided missile frigate Samuel B. Roberts (FFG-58), observed. “Somebody would have to do something about it, and that somebody would be the United States.”

An 8.3 magnitude earthquake struck 125 miles south of Apia on American Samoa, generating a tsunami that inundated the eastern coast of Samoa and parts of Tonga and killed more than 160 people, on 29 September 2009. The following day, Ingraham arrived and helped members of the Federal Emergency Management Agency and Army National Guardsmen, who had been flown to the area by USAF Boeing C-17A Globemaster IIIs. In addition, a USCG Lockheed HC-130H Hercules flew aerial surveillance missions. 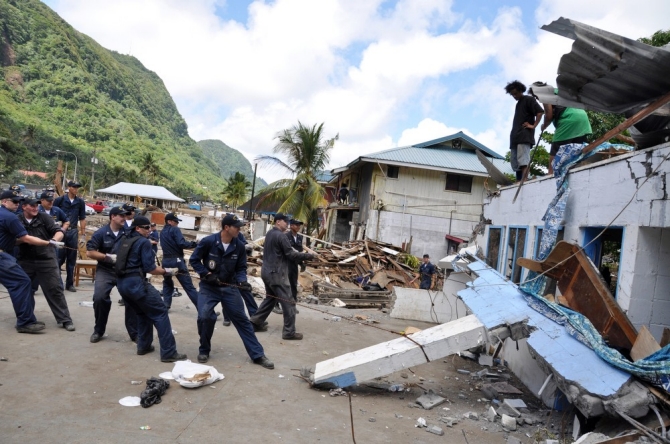 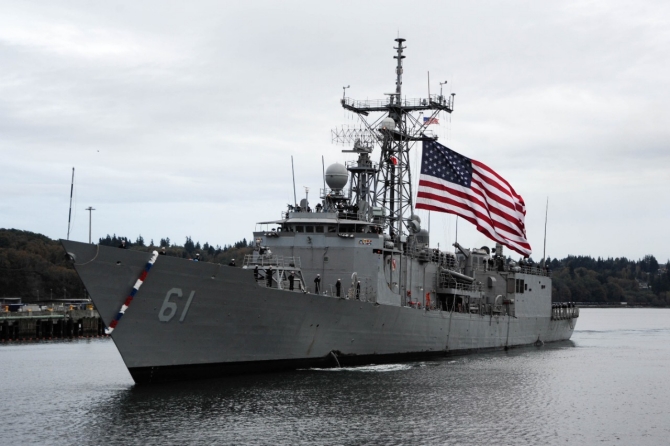 Ingraham was decommissioned on 30 January 2015 at NS Everett, Wash., and is berthed at the Naval Sea Systems Command (NavSea) Inactive Ships On-site Maintenance Office at Bremerton, Wash., pending her disposal.