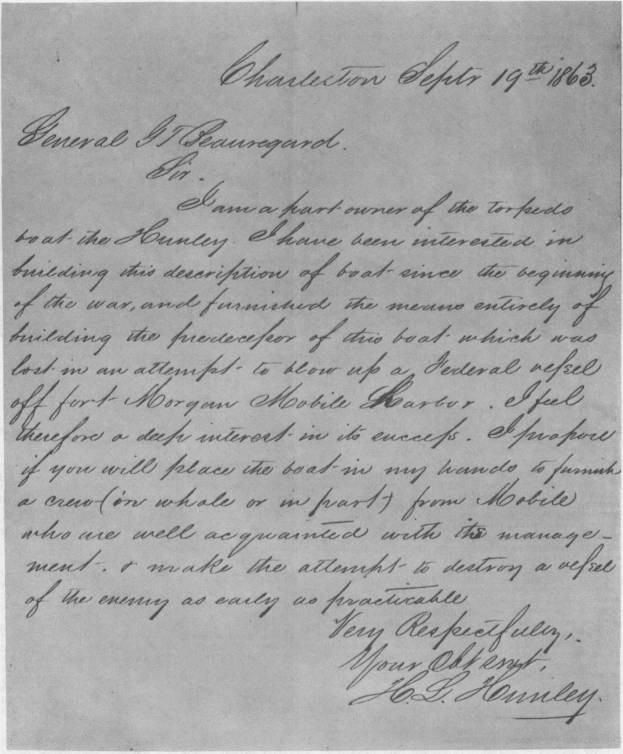 Caption: Inventor H. L. Hunley's proposal to use his submarine to attack a Union Ship.

Horace Lawson Hunley was born 29 December 1823, In Sumner County, Tenn. He early moved to New Orleans where he practiced law and represented Orleans Parish in the Louisiana State Legislature. On outbreak of the Civil War, he joined James R. McClintock and Baxter Watson in sponsoring the building of Confederate privateer submarine Pioneer, later scuttled to prevent capture when New Orleans fell. The three men built a second submarine at Mobile, Ala., but it sank in Mobile Bay. Hunley then provided the entire means for building a third submarine named H. L. Hunley in his honor. This manual powered submarine had successful trials in Mobile Bay, then was shipped to General Beauregard for the defense of Charleston in August 1863.

When early submarine operations at Charleston failed to produce a sinking, Hunley provided a crew headed by Lt. George A. Dixon, CSA. But Hunley took charge in the absence of Dixon 15 October 1863, and perished with his entire crew of seven when the submarine failed to surface from a dive under CSS Indian Chief.

Dixon raised and refitted CSS H. L. Hunley, armed her with a "Lee Spar Torpedo" and sank steam sloop-of-war Housatonic off Charleston Harbor 17 February 1864. Though submarine and crew perished in this mission, H. L. Hunley was the first submarine to sink a warship in combat, casting a long shadow into the 20th century.

Hunley has the distinction of being the first ship designed and built up from the keel to service and maintain the U.S. Navy's nuclear powered Ballistic Missile Submarine Fleet. She has complete facilities for servicing the complex Polaris Weapons Systems and for accomplishing any submarine repair other than a major shipyard overhaul.

Hunley sailed 25 July 1962 for shakedown training off Cuba. This completed 6 September, she visited several Gulf and Atlantic ports, including Mobile and Charleston. She returned north to Norfolk 28 September for postshake-down alterations until 8 December. She next paid a 3-day visit to New York City to host the Naval Reserve Officers Seminar "New Ships for the Modern Navy." She stood out of the Norfolk Operating Base 29 December 1962 for Holy Loch, Scotland, arriving 9 January 1963. Almost immediately she began taking the load off Proteus, whom she officially relieved 15 March 1963 as tender to Submarine Squadron 14 at Holy Loch, Scotland. This duty continued until 12 April 1964 when Hunley sailed for conversion that provided capability of handling the new A3 Polaris Missile. She resumed her duties at Holy Loch 15 June 1964.

A Polaris milestone was reached in December 1965 when Thomas A. Edison came alongside to commence the 100th refit of an SSBN by Hunley. This signified that one hundred SSBN submarines had gone out on time from Hunley and not one of them had to make an early return from patrol. This represents some 200 months of Polaris on station or 16- years of submerged strategic deterrent since Hunley's arrival in Holy Loch 9 January 1963.

Among impressive jobs carried out by Hunley is welding on SSBN pressure hulls or reactor plant fluid systems. Once unheard of in submarine tending, these jobs are only a few of many tackled with confidence and skill by Hunley. These and many other alterations are carried out as a matter of routine to keep SSBN's on the line with the newest possible technical improvements and safety devices. For example, an auxiliary "Sub-Safe" package was accomplished on Theodore Roosevelt in which over 40 fittings and more than 100 feet of new piping in a major system were installed. A battery replacement for Ethan Allen was completed in only 11 days. Hunley meets demands from making water-borne propeller replacements to encapsulation of AC induction motors; delicate repairs to navigation and fire control, and many other varied tasks to insure that each SSBN has the finest of care on each refit. The resolution, can-do spirit, and persevering fidelity of her officers and men give firm allegiance to Hunley's motto: "We Serve to Preserve Peace."

Hunley returned to the United States late in 1966 and in 1967 operates out of Charleston, S.C., laboring to keep sharp the edge of the Navy's underwater nuclear deterrent.