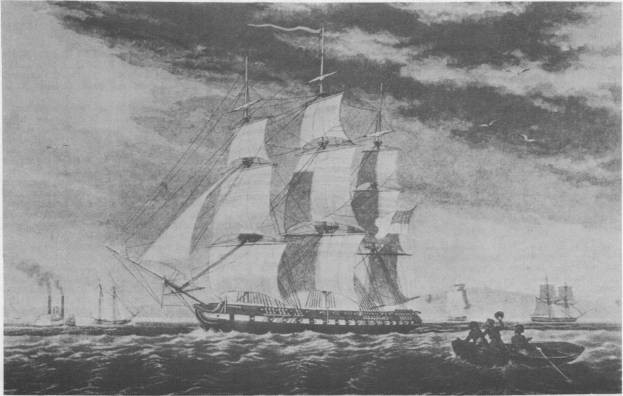 Caption: Frigate Hudson circa 1826 from an engraving by W. J. Bennett.

The name source for the first Hudson, a frigate, is uncertain, but may have been named for the river; the second, a Revenue Cutter, retained her name while she operated with the U.S. Navy during the Spanish-American War; the third Hudson (DD-475) honored the late Capt. William Levereth Hudson (1794-1862); see Hudson III (DD-475) for complete biography.

Liberator, a frigate designed along the lines of a packet vessel, was laid down in 1825 at New York by Smith & Dimon for Greek buyers, and launched in November 1825. When the Greeks failed to pay for the ship, she was taken over on 23 August 1826 by the U.S. government.

In 1828, the ship, renamed Hudson, began fitting out for what was to be her only cruise, and during this period was inspected by President John Quincy Adams and his entourage. The frigate sailed from New York on 28 September 1828 to serve as Commodore John Orde Creighton's flagship in the Brazil Squadron. In company with Erie, she touched at New London for supplies and ammunition before turning south to reach Rio de Janerio 29 November to help eradicate the insidious traffic in slaves along those shores. From there Hudson conducted several patrols along the South American coast, stopping and boarding for inspection U.S. as well as foreign ships. She also served as a harbor patrol vessel at Montevideo and Rio and cruised to Bahia and St. Catherine during her three years on station.