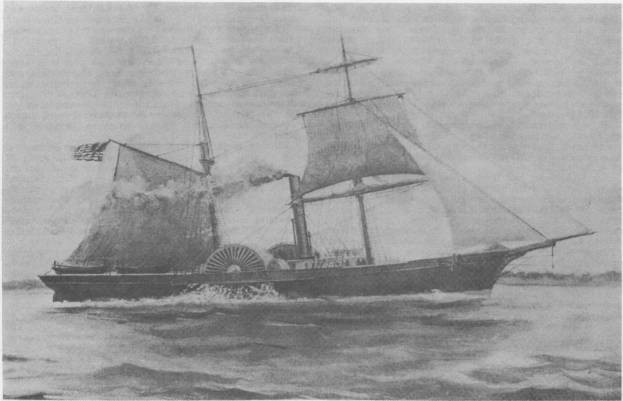 Harriet Rebecca Lane was the niece and official hostess of President James Buchanan.

Harriet Lane, built for the Treasury Department by William H. Webb, was launched in New York City November 1857. She served as a revenue cutter until temporarily transferred to the Navy late in 1858. Her new assignment took her to Paraguay with a squadron ordered to support the discussions of U.S. Special Commissioner James B. Bowlin with Dictator Carlos Antonio Lopez concerning reparations for damages incurred during an unprovoked attack on Waterwitch by the Paraguayan forces 1 February 1855. This display of sea power quickly won the United States a prompt and respectful hearing which 4 years of diplomacy had failed to obtain. Paraguay apologized, paid an indemnity to compensate the family of an American seaman killed during the fight, and signed a new commercial treaty containing provisions highly advantageous to the United States. In his report Flag Officer W. B. Shubrick singled out Harriet Lane for special commendation on the invaluable service she rendered in extricating his other ships repeatedly running aground in the treacherous waters of the Parana River.

Returning to the United States, Harriet Lane resumed her former duties as a revenue cutter. In September 1860 she embarked Edward Albert, the Prince of Wales, the first member of the British Royal Family to visit the United- States, for passage to Mount Vernon where he planted a tree and placed a wreath on the tomb of George Washington.

Harriet Lane again transferred to the Navy 30 March 1861 for service in the expedition sent to Charleston Harbor, S.C., to supply the Fort Sumter garrison. She departed New York 8 April and arrived off Charleston 11 April. The next day she fired a shot across the bow of Nashville when that merchantman appeared with no colors flying. Nashville avoided- further attack by promptly hoisting the United States ensign, but 2 days later raised the Palmetto flag to begin her career as one of the most elusive Confederate privateers. When Major Anderson surrendered Fort Sumpter 13 April, Harriet Lane with drew with her sister ships.

Her next important service came the following summer when a task force was sent against Fort Clark and Fort Hatteras on the outer banks of North Carolina to check blockade running in the area. The ships sortied from Hampton Roads 26 August 1861 for this first important combined amphibious operation of the war. The next morning Harriet Lane, Monticello, and Pawnee slipped close inshore to provide direct support to the landings while heavier ships pounded the forts from deeper water. The last resistance was snuffed out the following afternoon, giving a badly needed boost to morale in the North disheartened a month before by defeat in the first battle of Bull Run. Of greater importance was the fact that this combined operation opened the inland waterways to Union ships and gave the North Atlantic Blockading Squadron a base deep in Southern waters.

Harriet Lane ran aground while attempting to enter Pamlico Sound through Hatteras Inlet 29 August and suffered severe damage while fast on the shoal. She was refloated at the cost of her armament, rigging, stores, provisions, and everything else on board which could be heaved over the side to lighten ship. Temporary repairs completed 3 September, she proceeded to Hampton Roads, arriving 8 September 1861.

Harriet Lane sailed 10 February 1862 to join Comdr. D. D. Porter's Mortar Flotilla at Key West, where units were assembling for an attack on Confederate forts in the Mississippi River Delta below New Orleans. Comdr. Porter embarked at Washington. During her passage to Hampton Roads, Harriet Lane was taken under fire by the Confederate battery at Shipping Point, Va., which inflicted such damage to her port wheel that her departure for Key West was delayed another 2 days. On 24 February, she captured the Confederate schooner Joanna Ward off Florida.

The Mortar Flotilla sailed from Key West 6 March to begin the operation which would deprive the Confederacy of the use of its largest inland waterway. Harriet Lane, as Porter's flagship, was among the ships which engaged Forts Jackson and St. Philip, which protected New Orleans. She helped provide the intense fire which covered Flag Officer Farragut's daring rush past the forts on 24 April. "You supported us most noble," wrote Farragut in praise of Porter's action. On 29 April Harriet Lane steamed up river to accept the surrender of upstream forts. The success of this attack opened the way for the movement of waterborne Union forces, now free to steam up river to join those coming south from Illinois to form a pincer which would sever the Confederacy.

Farragut ordered the Mortar Flotilla to Ship Island 1 May, and Harriet Lane continued to Pensacola where she transported Brigadier General L. G. Arnold's troops from Fort Pickins to the other side of the bay where they occupied Forts Barrancas, and McRee, Barancas Barracks, and the Navy Yard which had been abandoned by the Confederates. Back at Ship Island for repairs 30 May, Harriet Lane prepared to ascend the Mississippi with Porter's mortar boats to engage enemy batteries on the cliffs of Vicksburg, Mississippi while Farragut ran past this river stronghold to join Flag Officer Davis in an effort to clear the entire Mississippi Valley of obstructions to Union shipping. However, sufficient ground forces to take Vicksburg were not made available, nullifying the value of his operation, and after a frustrating encounter with new Confederate ironclad ram Arkansas, Farragut ran back down past Vicksburg while Harriet Lane and her sister vessels in the Mortar Flotilla again covered the dash by bombarding the Confederate batteries 15 July.

As his ships required extensive repairs and most of his men were ill, Farragut ordered his ships to rendezvous at Pensacola. Following blockade duty in Mobile Bay, Harriet Lane sailed for Galveston, Tex., which she bombarded and captured, with the aid of Westfield, Owasoo, Clifton, and Henry Janes, 3 October 1862. She was in Galveston Harbor when the Confederates retook that base 1 January 1863; and, after a bitter contest in which her captain, Comdr. J. M. Wainwright and executive officer, Lt. Comdr. Edward Lea, were killed, she fell into Southern hands. After serving the Confederate Army's Marine Department of Texas, she was sold to T. W. House, who converted her into a blockade runner named Lavinia. She finally escaped Galveston 30 April 1864 and sailed to Havana, where she was interned. In 1867, following the war, she was recovered from Cuba; was converted to a bark rig; and renamed Elliott Richie. She was abandoned off Pernambuco, Brazil, 13 May 1884.