Richard Ellington Hawes. born in Thomson, Ga., on 12 February 1894, attended the University of Georgia and Mercer University, excelling at sports. He decided against taking the bar exam and instead coached and played professional baseball. Hawes enlisted in the Navy following the United States' entry into World War I in 1917, and 15 months later accepted a temporary appointment as an ensign. He reverted to warrant boatswain in 1920.

In 1925, he joined submarine rescue ship Falcon (ASR 2). On the night of 25 September 1925, merchant steamship City of Rome rammed and sank submarine S-51 (SS-162) off Block Island, N.Y. Only three of the 36 men on board the ill-fated boat survived. Falcon played a key role in the salvage of S-51 (16 October 1925–8 July 1926). She raised the boat on 5 June 1926, and towed her to New York the following month, providing air pressure for the pontoons supporting her, as well as her compartments. Hawes received the Navy Cross for his “extraordinary heroism and devotion to duty” during the salvage. The Navy struck S-51 on 27 January 1930.

Coast Guard vessel Paulding (CG-17), a former Navy destroyer (DD-22) loaned to that service to catch rum runners, rammed and sank submarine S-4 (SS 109) when the boat surfaced from a submerged run over the measured-mile off Provincetown, Cape Cod, Mass., on 17 December 1927. Paulding stopped and lowered life boats, but only a small amount of oil and air bubbles rose to the surface. Severe weather set in and prevented the men who responded to the scene from rescuing at least six survivors trapped in the forward torpedo room, who exchanged a series of signals with divers by tapping on the hull. Falcon took part in raising S-4 on 17 March 1928, and she was subsequently repaired and returned to service. An inquiry absolved the Coast Guard of blame. Hawes was commissioned an ensign by a special act of Congress for his role in the salvage of S-51 and S-4.

Hawes assumed command of submarine rescue ship Pigeon (ASR-6) in January 1940. Pigeon sailed with the Asiatic Fleet in waters ranging from the Philippines to the Chinese coast. The Fourth Marine Regiment evacuated Shanghai, China, in November 1941, and Pigeon escorted river gunboats of the Yangtze Patrol that withdrew from China. She sailed from Cavite in the Philippines, crossed the Formosa [Taiwan] Strait (28–29 November), and rendezvoused near midnight of 30 November–1 December with river gunboats Luzon (PR-7) and Oahu (PR-6), and minesweeper Finch (AM-9). A Japanese seaplane circled the formation on the morning of 1 December, and for about eight hours, beginning at noon, seven Japanese warships circled the American ships. One transport, loaded with troops (apparently bound for the Malayan expedition), held gunnery exercises on the gunboat formation. The episode ended at about 1900 when a Japanese transport hoisted an international signal that translated as: “Enemy escaping on course 180.” Pigeon sighted Corregidor Light and the convoy entered Manila Bay on 4 December 1941. 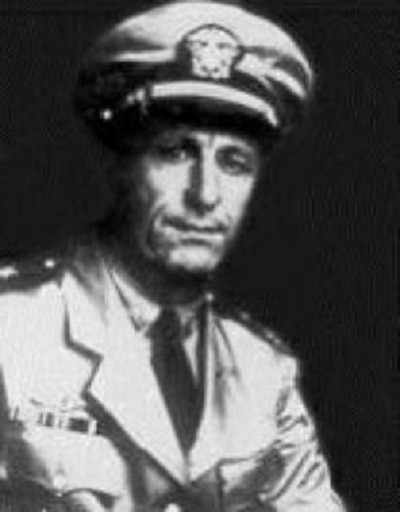 Four days later, Hawes learned of the Japanese attack on Pearl Harbor, T.H. He prepared to get Pigeon underway and stood by to evacuate Cavite Navy Yard. While waiting for the enemy to appear, he loaded stores and salvage and repair supplies and equipment on board. The Japanese bombed the navy yard on 10 December 1941. Pigeon lay moored in a five-ship nest, but Hawes had foresightedly ordered tackles rigged, steam at throttle, and men ready for action. Pigeon opened fire with two .50 and two .30 caliber machine guns, but they could not reach the altitude of the enemy planes. She cleared the dock lashed to Quail (AM-15) and cut loose, and then both ships maneuvered clear of bombs that fell close astern. The attackers’ bombs ignited enormous fires at the navy yard, however, and detonated torpedo warheads at the torpedo overhaul shop. Flaming debris soared over Pigeon as she placed her stern across the end piling, ran a line some 20 feet to submarine Seadragon (SS-194), and hauled the boat clear of the dock. Fires scorched Seadragon’s hull, and just as Pigeon pulled the submarine backward to the channel, a large fuel tank exploded and spewed a horizontal wave of fire that blistered the hulls of both vessels. Seadragon reached the channel, and her men plugged the leaks. Hawes received his second award of the Navy Cross for valiantly leading his ship during that battle, and Pigeon received the Presidential Unit Citation.

“The courage, spirit, and efficiency of the Pigeon crew,” Hawes reported, “is believed unsurpassed by past, present, or any future crews of any vessel of any nation.” Her sailors scoured the still burning navy yard and acquired a 3-inch gun from fire-damaged minesweeper Bittern (AM-36) and another from submarine Sealion (SS-195). They fashioned sheets of boiler plate into gun and splinter shields for six .50 caliber machine guns which circled the bridge. “The Pigeon is well armed,” Hawes observed, “and is believed to be the best equipped vessel of her type and tonnage in existence.” The ship continued to support the other vessels of the Asiatic Fleet with salvaged equipment and provided repairs, and fought against Japanese planes.

The continued air raids, however, drove many of the submarines from Manila Bay by the end of December 1941. A number of submariners were evacuated to bases in Java and Australia, where they formed the nucleus maintenance crews that maintained U.S. submarines at sea. Lt. Comdr. Frank A. Davis, USNR, relieved Lt. Comdr. Hawes of command of Pigeon on 5 January 1942. Hawes subsequently put submarine rescue ship Chanticleer (ASR-7) and submarine tender Anthedon (AS-24) into commission, on 20 November 1942 and 15 September 1944 (recommissioned), respectively. These ships attained a reputation for efficiency and readiness under Hawes’ command. He was transferred to the retired list and promoted to rear admiral on 1 December 1952. Hawes died on 30 December 1968 at his home in Thomson, Ga.

The chevron extending into chief represents the process of submarine rescue, the transition from sea to air further suggested by the chevron wavy below and straight above. The shield, divided vertically, alludes to the Atlantic and Pacific Oceans where Rear Adm. Hawes served with distinguished conduct. The blue and gold are traditional Navy colors. At the top, two awards of the Navy Cross, which Hawes received for his heroic submarine salvage operations, are denoted by the silhouetted crosses. The five-pointed star at the center signifies an award of the Bronze star to Hawes for organizing the refitting of 34 submarines while he commanded submarine tender Anthedon (AS-24). 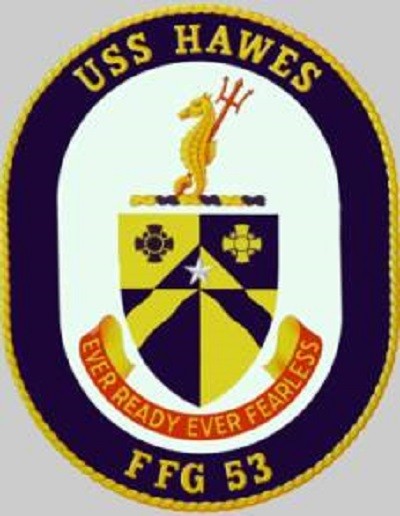 The trident suggests retrieval at sea and the special equipment and vessels used to rescue submarines. The seahorse is a traditional symbol of the Navy’s diving service. The color scarlet is symbolic of courage in the face of danger, and gold signifies excellence and achievement. The complete coat of arms as emblazoned upon a white oval background is enclosed by a dark blue border edged with gold rope, and inscribed “USS Hawes” at top and “FFG 43” in base all in gold. 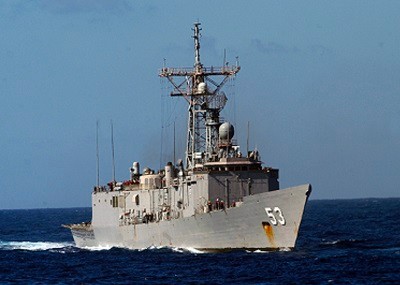 Hawes, with Helicopter Antisubmarine Squadron (Light) 48 Detachment 10 embarked, returned from a counter-narcotics deployment to the Caribbean and Western Atlantic to NS Norfolk, Va., on 7 October 2009. The ship’s operations resulted in the seizure of 200 barrels of cocaine.