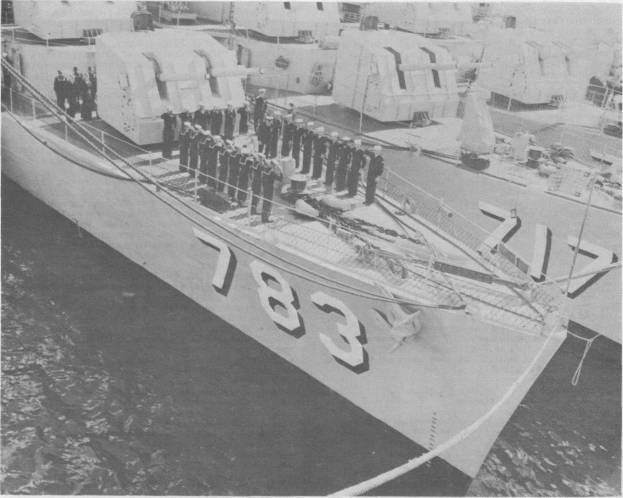 Henry Gurke was born 6 November 1922 at Neche, N. Dak. Enlisting in the Marine Corps 15 April 1942, he participated in the invasion and occupation of Pavuvu, Russell Islands. Private Gurke was killed during the battle for Bougainville 9 November 1943. He and another Marine were sharing a foxhole to defend a vital road when a Japanese grenade dropped directly in on them. Knowing that his companion manned an automatic weapon with greater fire power than his own and could thereby provide more effective resistance, Gurke thrust the other Marine aside and threw himself over the grenade to smother the explosion. For his gallantry above and beyond the call of duty, Private Gurke was posthumously awarded the Medal of Honor.

After shakedown along the West Coast, Gurke sailed for the Western Pacific 27 August 1945, reaching Pearl Harbor 2 September. From there she continued west to participate in the occupation of Japan and former Japanese possessions. Returning to her home port, San Diego, in February 1946, Gurke participated in training operations until 4 September 1947 when she sailed for another WesPac cruise. Two further WesPac cruises, alternating with operations out of San Diego and a cruise to Alaska in 1948 to aid in the celebration of the 50th anniversary of the Yukon gold rush, filled Gurke's schedule until the outbreak of the Korean War.

Gurke departed San Diego 5 August 1950 and arrived at Yokosuka 19 August to screen fast carrier task forces off the west coast of Korea, 25 August-6 September. She shared with five other destroyers the award of the Navy Unit Commendation to Task Element 90.62 for extraordinary heroism in support of the landing at Inchon, 13-15 September 1950. Steaming up Flying Fish (So Sudo) Channel at flood tide the first day, Gurke bombarded Wolmi Do and the Inchon waterfront. Communist fire concentrated on three of the "sitting duck" destroyers, Gurke taking three hits that caused no casualties and only minor damage. The destroyer's 5-ineh batteries opened in a prelanding shore bombardment 15 September 1950 until the first assault wave of Marines crossed the line of departure for Wolmi Do which was secured by (high noon. Wolmi Do was no longer a dominating threat over approaches into Inchon by landing assault craft that would be borne in on the incoming afternoon tide. After this initial landing General of the Army Douglas MacArthur made visual signal: "The Navy and Marines have never shone more brightly than this morning."

After the Inchon landings, Gurke screened fast attack carriers launching powerful strikes against enemy positions and supply lines. She also patrolled the narrow Formosa Straits to prevent Chinese Communist invasion of Formosa and to insure that Formosa was not used as a base for military operations against the Chinese mainland. During the first year of war Gurke frequently served as flagship of Vice Admiral Struble and the 7th Fleet's Carrier Task Force 77.

Two interludes in the States for repairs and training interrupted Gurke's Korean conflict service. But she continued, when deployed with the Seventh Fleet, to screen attack carriers and bombard enemy coastal supply routes and installations, once destroying a Communist train through accurate gunnery. She again drew fire from Communist shore batteries 25 June 1953, but escaped without serious damage from two direct hits and the shrapnel of five air bursts.

When the shooting stopped in Korea in August 1953, Gurke continued patrols in the Far East to help keep the peace. Six to eight month deployments to the Western Pacific were alternated with stateside overhauls and training in a full peacetime routine. During 17-18 June 1960, she was a unit of the escort for cruiser St. Paul carrying President Eisenhower on a fast Manila-Taiwan cruise. She also participated in nose-cone recovery work as America's space effort rolled into high gear, facilitated by seapower.

In June 1962, Gurke participated in a series of nuclear tests off Christmas Island. She entered the Puget Sound Naval 'Shipyard 11 July 1963 for modernization overhaul, emerging 1 May 1964 with new equipment ranging from antisubmarine rocket launchers to the latest in air search radar and electronic detection devices. She arrived in her new 'home port of San Diego 15 May for fleet operations along the western seaboard until 21 October when she again sailed for the Far East. She arrived in Yokosuka and joined the 7th Fleet 16 November 1964 to begin her duties as a unit of Fast Carrier Task Force 77.

The first day of 1965 found Gurke with Task Group 77.7 in the South China Sea. Long hours were spent on station, plane-guarding for attack carriers Ranger (CVA-61) and Hancock (CVA-19). As the Vietnam conflict became "hot" in late January she served as one of the escorts for an amphibious task group in the vicinity of Da Nang, South Vietnam. Long stretches at sea with fast carriers were punctuated by liberty calls at Subic Bay and Hong Kong. On 20 April 1965 the destroyer sailed in company with Ranger (OVA-61) for return to San Diego, 7 May 1965. The remainder of the year was filled with a rapid succession of coastwise training exercises ranging north to Seattle, which continued until she sailed for the western Pacific 12 May 1966. After visiting Hawaii, Japan, and the Philippines, Gurke was stationed in the Gulf of Tonkin late in June for search and rescue duty. On 1 July three North Vietnamese PT boats were detected 11 miles away from Gurke and three sister destroyers and closing at high speed. Fighter aircraft from Constellation intercepted the raiders and sank all three within minutes. The destroyers picked up 19 survivors for questioning.

While in the Gulf of Tonkin, Gurke refueled helicopters by a new in-flight refueling process enabling them to rescue American pilots downed in hostile territory.

After a brief respite in Hong Kong, Formosa, and the Philippines in August, Gurke resumed duty in the Gulf of Tonkin in September and set a record in completing 113 in-flight refuelings. On this assignment she bombarded Viet Cong positions in the Mekong and Saigon River deltas. After being relieved early in the fall, the destroyer returned home, via Okinawa and Japan, arriving San Diego 16 November. In 1967, she operated along the West Coast and prepared for future action.