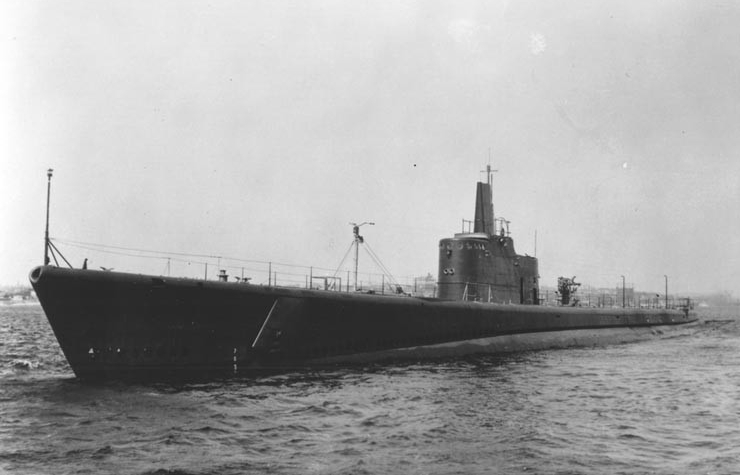 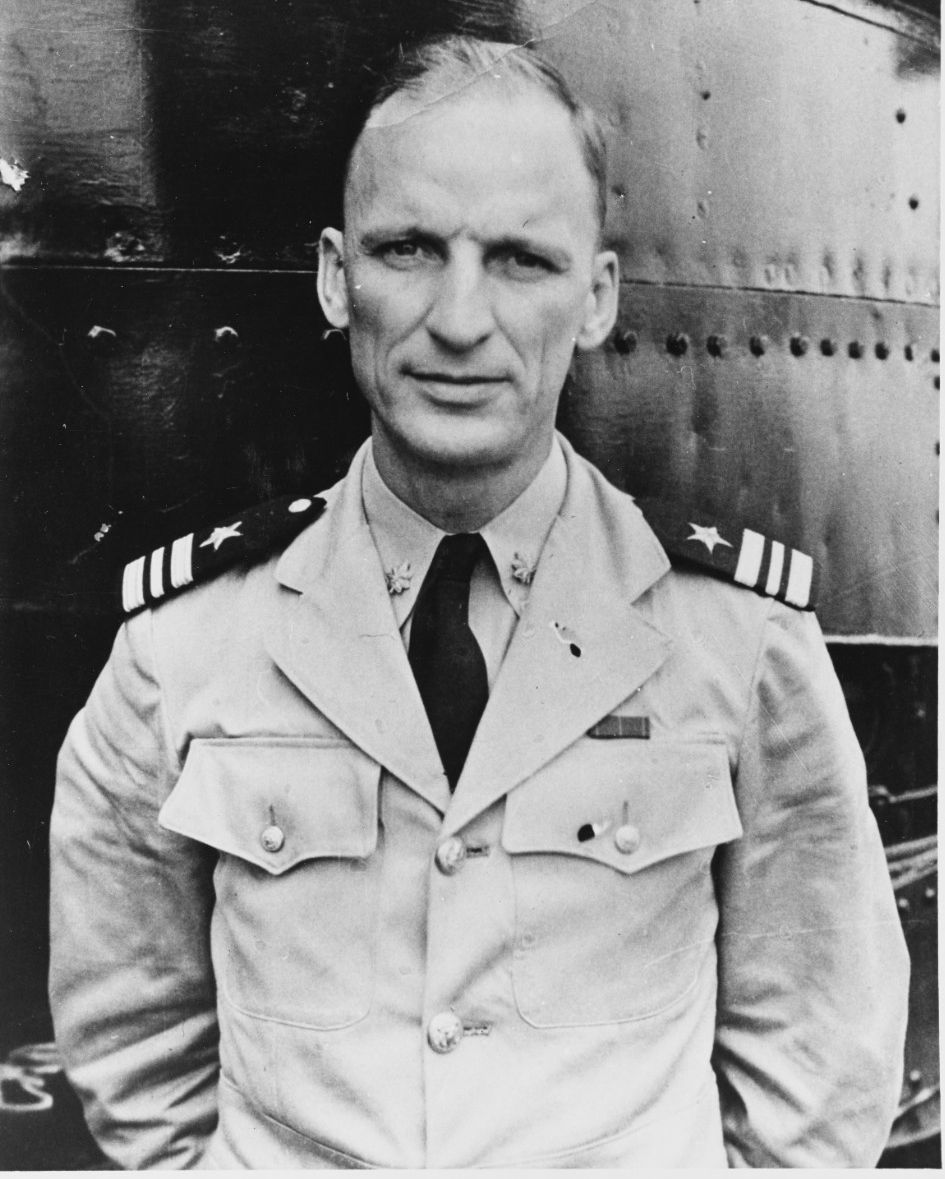 Lieutenant Commander Mannert Lincoln Abele onboard a submarine, circa the early 1940s. He lost his life while commanding Grunion (SS-216) in the Aleutians in August 1942. U.S. Naval History and Heritage Command photograph. Catalog#: NH 56003.

A small fish of the silversides family indigenous to the U.S. Pacific coast.

Grunion (SS-216) was laid down on 1 April 1941 at Groton, Conn. by the Electric Boat Co.; launched on 22 December, sponsored by Ms. Margaret U. Hooper, wife of Rear Adm. Stanford C. Hooper, director of the Radio Division, Bureau of Ships. 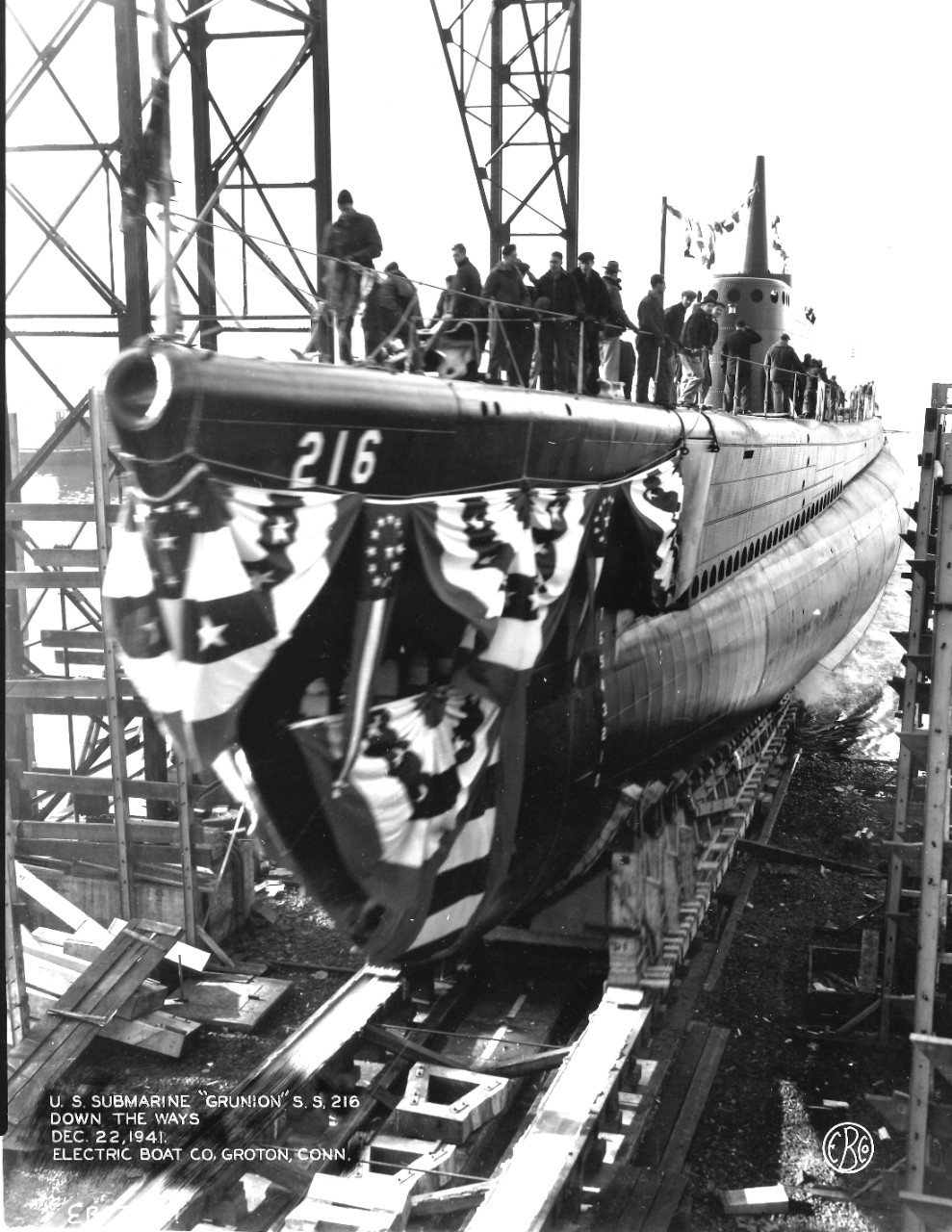 Commissioned at the Submarine Base, New London, Conn., on 11 April 1942, Lt. Cmdr. Mannert L. Abele in command, Grunion began her post-commissioning work-up in the waters off New London on 13 April 1942. The boat conducted her first submerged training operations the next day in company with the submarine rescue vessel (ex-minesweeper) Falcon (ASR-2). After several more days of training, the submarine test-fired her 3-inch gun on 21 April, followed four days later with her first test planting of a naval mine. She conducted her final weapons testing at the Naval Torpedo Station, Newport, R.I., on 28–29 April.

Three days after Grunion returned to New London on 1 May 1942, she underwent sound, ballistic dive, and maneuvering trials. Unfortunately, minor leaks developed in the boat’s hull during a descent to 315 feet conducted on bearing 137°T, 65 miles off Montauk Point, N.Y., on 7 May, forcing her to return to New London. Unable to dive, the submarine performed her final surface trials from 11–18 May.

Trials completed, Grunion entered the marine railway at Electric Boat on 20 May 1942. After two days of post-commissioning repairs, the submarine returned to the water and was declared ready for duty on 23 May.

Designated Task Group 25.5, Grunion stood out to sea on 24 May 1942, in accordance with Commander, Submarines, Atlantic Fleet (ComSubLant) operation order 5SA-42. Three days later, at 0030 the boat sighted an unidentified contact steaming westward at 35°30'N, 71°43'W, approximately 7,000 yards off her port bow. She set an intercept course, crept to within 200 yards, and identified the contact as a surface warship. The vessel’s slow speed, course and use of running lights led Grunion to speculate the vessel could be an enemy submarine tender. Intent on closing further, the boat submerged at 0058. Unfortunately, as she did so, the stranger doused her running lights and steamed out of the area. Rather than give chase, the submarine surfaced at 0116 and continued her planned course southward. She reported the contact in her regular daily message traffic several hours later at 0602.

As she steamed east of the British West Indies [Commonwealth of The Bahamas] at 1618 on 28 May 1942, Grunion made her first sound contact at 24°53'N, 72°42'W, bearing 309°T. A few minutes later, the submarine heard what she believed to be pings and submerged to develop the contact. The boat detected additional “long ping like noises” at 1659, which caused her to determine the source was not a surface vessel. She broke contact, surfaced and resumed her planned course at 1716.

Grunion arrived off the entrance to Coco Solo, C.Z. at 0645 on 3 June 1942, and moored at the submarine base approximately four hours later. She transited the Panama Canal early on 6 June and moored at Pier 18, Balboa Harbor, C.Z., at 1918. Designated Task Unit 7.8.7., of Submarines, Pacific Fleet (ComSubPac), she got underway for Pearl Harbor, Territory of Hawaii, at 1005 the next day.

En route to the Hawaiian Islands, Grunion submerged and conducted training exercises from 1025-1120 on 13 June 1942 and night gunnery training four days later. She completed her voyage and moored at the Submarine Base, Pearl Harbor. T.H. at 0910 on 20 June.

Soon thereafter, Grunion conducted four more days of training (22–25 June 1942). Five days later, the submarine stood out for Midway Atoll at 0905 escorted by Litchfield (DD-336). Just after 1300, the submarine conducted surface battle training on a target towed by her escort. During the exercise, the boat fired several rounds from her 3-inch gun as well as her two machine guns. She released her escort at 1930.

Grunion reached Midway at 1000 Hawaiian War Time (HWT) on 4 July 1942, but did not linger long, for she stood out at 1300 HWT the same day, taking departure at 1330 for area Bulldog, to patrol the shipping lanes between Attu in the Aleutian Islands and Japan. On 10 July, she began patrolling north of Kiska. Five days later on 15 July, she reported firing four torpedoes at an unidentified destroyer, which responded with an unsuccessful counterattack on the submarine. According to a post-war investigation, the submarine engaged an anti-submarine patrol later that afternoon, sinking two Japanese 460-ton submarine chasers Ch 25 and Ch 27.

On 28 July 1942, Grunion began patrolling the exits of Kiska Harbor. Two days later, on 30 July, she reported heavy enemy anti-submarine patrols in the area. Given that only ten torpedoes remained on board the boat, Navy officials ordered Grunion to return to Dutch Harbor. En route the next morning, she sighted the freighter Kano Maru and fired a two-torpedo spread at 0547, one of which struck and damaged the enemy vessel. Unfortunately, she missed her target with a lone torpedo fired ten minutes later, and two of the three the boat fired at 0607 failed to detonate after striking the Maru. According to Japanese records, as Grunion attempted to surface and engage the freighter in a surface action, an 8-centimeter shell fired by Kano Maru struck Grunion’s conning tower, sinking her.

The Navy reported Grunion and her crew of 70 submariners overdue from patrol and presumed lost on 5 October 1942. Several months later, on 10 May 1943, Secretary of the Navy Frank Knox awarded Lt. Cmdr. Abele the Navy Cross, posthumously, for extraordinary heroism displayed during Grunion’s 15 July 1942 attack on Ch 25 and Ch 27.

Decades later, greatly assisted by information gathered by Abele’s sons Brad, Bruce, and John, during a four-year investigation into the loss of their father’s boat, in 2007 Project Lost 52, led by explorer Tim Taylor located the wrecked hull of a submarine without her bow section they believed to be Grunion. After an extensive examination of the historical and underwater archaeological data by the Naval Historical Center (now the Naval History and Heritage Command), Rear Adm. Douglas J. McAneny, ComSubPac, confirmed the boat’s discovery in a statement issued on 2 October 2008. Over ten years later, Project Lost 52 announced the discovery of Grunion’s bow on 30 July 2019.

Grunion earned one battle star for her service during World War II.