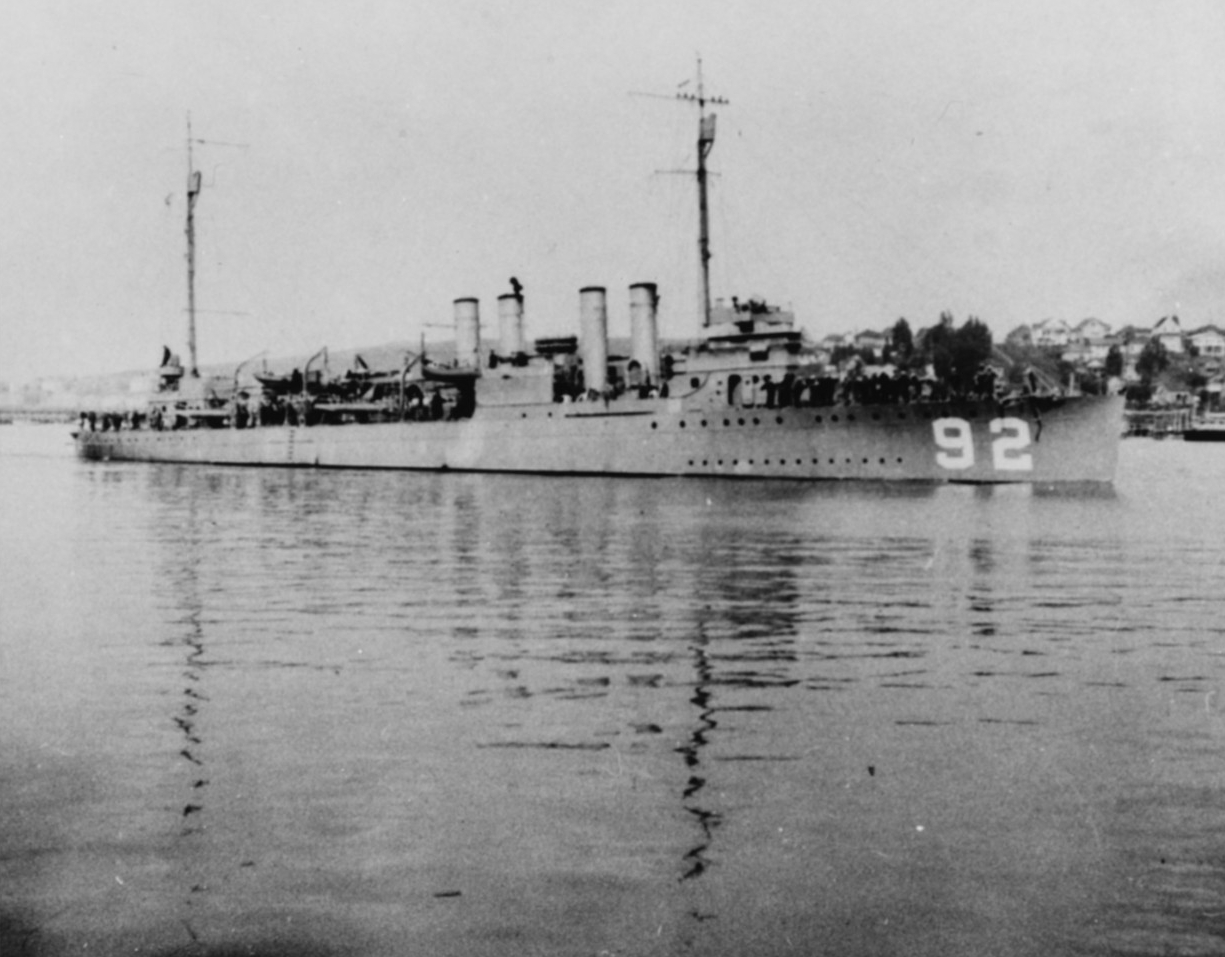 Gridley (Destroyer No. 92) off the Mare Island Navy Yard, California, in 1919. Part of the city of Vallejo is visible in the background. U.S. Naval History and Heritage Command photograph, NH 53781.

Charles Vernon Gridley was born 24 November 1844 in Logansport, Ind., and was appointed to the Naval Academy in 1860. Reporting for duty with his class in September 1863, Gridley joined the sloop-of-war Oneida with the West Gulf Blockading Squadron and distinguished himself with Farragut at the Battle of Mobile Bay 5 August 1864. Promoted to Lieutenant in 1867 and Commander in 1882, he spent the next 30 years at various stations around the world, including a tour as instructor at the Naval Academy. Captain Gridley took command of Olympia, Admiral Dewey's famous flagship, 27 April 1898, a post which he held despite failing health during the Battle of Manila Bay 1 May 1898. It was that morning that Dewey gave his famous command: "You may fire when you are ready, Gridley," immortalizing the doughty captain. After the destruction of the Spanish squadron and the capture of Manila, Gridley was obliged to leave his command because of his health, and died en route to the United States at Kobe, Japan, 25 May 1898. 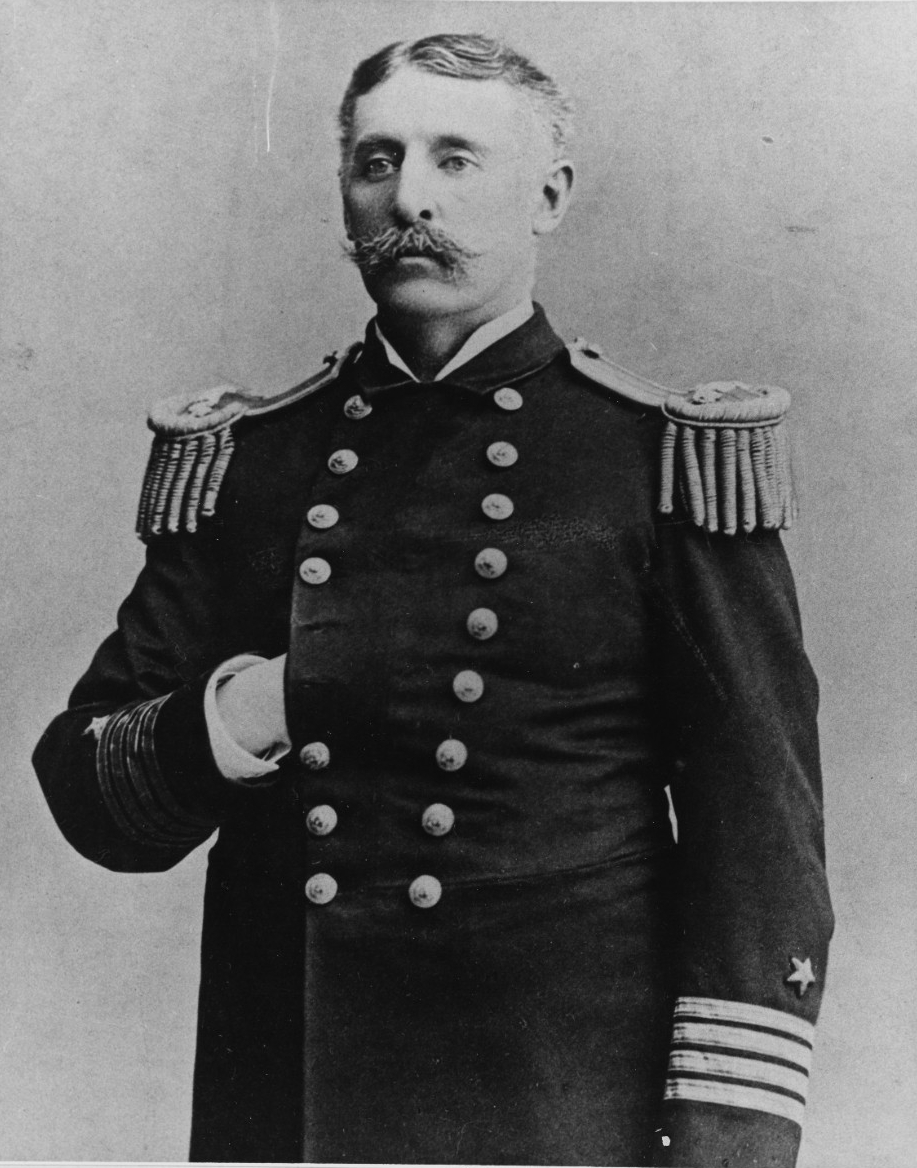 The first Gridley was launched by the Union Iron Works of San Francisco, Calif, on 4 July 1918; sponsored by Mrs. Francis P. Thomas, daughter of Capt. Gridley, and commissioned on 8 March 1919, Comdr. Frank J. Fletcher in command.

After fitting out at the Mare Island Navy Yard, Gridley departed from San Diego on 24 March 1919, transitted the Panama Canal, and joined the Destroyer Force for maneuvers in Cuban waters. She then repaired briefly at Norfolk, Va., before putting into New York on 26 April 1919. Gridley's first assignment was with a group of destroyers posted along the route of the Navy's transatlantic seaplane flight. Gridley and her companions sent up smoke and flare signals to guide the intrepid flyers and with the help of the surface ships flying boat NC-4 penetrated a dense fog and reached the Azores on 17 May 1919. Subsequently Gridley participated in the search for NC-1, forced down in the fog, and then acted as guard ship on the last leg of NC-4's historic flight, which was completed at Plymouth, England, on 31 May 1919.

Gridley arrived at Brest, France, on 31 May and spent the next two months in various ports of the Mediterranean transporting passengers and making goodwill visits. She arrived bark at New York on 31 July. Gridley was reclassified to DD-92 on 17 July 1920. Operating out of Portsmouth, N.H., Gridley embarked Major Gen. John A. Lejeune and Brig. Gen. Smedley D. Butler of the Marine Corps at Charleston, S.C., on 2 September 1920, for an inspection tour of Caribbean bases and commands, including posts in Cuba, Haiti, and the Dominican Republic. Her distinguished passengers disembarked on 27 September 1920.

In the following years Gridley trained officers and men of the Naval Reserve Force while operating out of Charleston, Newport, R.I., New York, and Philadelphia, Pa. She was decommissioned at Philadelphia Navy Yard on 22 June 1922, and remained inactive until her name was stricken from the Navy List on 25 January 1937. Gridley's hulk was sold for scrapping on 19 April 1939.