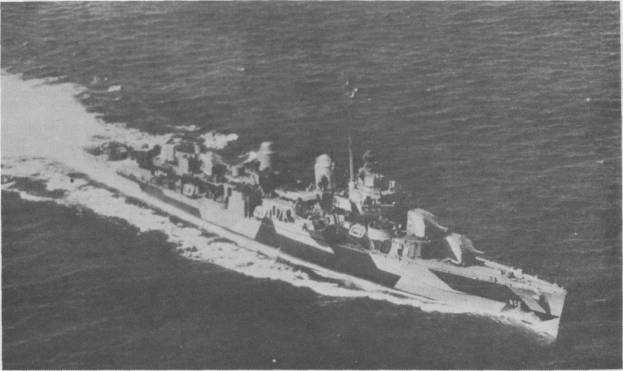 Caption: USS Gregory (DD-802) took less than a year from keel to commissioning.

Francis Hoyt Gregory was born in Norwalk, Conn., 9 October 1780. While in the merchant service, he was impressed by the British in an incident typical of those which led in part to the War of 1812. After escaping, Gregory was appointed a midshipman 16 January 1809 by President Jefferson and reported to Revenge, commanded by Oliver Hazard Perry. In March 1809 he was transferred to the Gulf Squadron at New Orleans. While serving in Vesuvius and as captain of Gun Boat 162, Gregory participated in the capture of an English brig smuggling slaves into New Orleans and three Spanish pirate ships. During the War of 1812, he served on Lake Ontario under Commodore Isaac Chauncey and participated in attacks on Toronto, Kingston, and Fort George. In August 1814 Gregory was captured by the British; refused parole, he was sent to England and remained there until June 1815.

After he was released by the British, Gregory joined the Mediterranean Squadron and operated along the North African coast until 1S21. In that year he became captain of Grampus and spent the following 2 years cruising the West Indies, to suppress piracy. While in the Indies. Gregory captured the notorious pirate brig Panchita and destroyed several other pirate ships. After fitting out, the frigate Brandywine, destined to carry LaFayette back to France, in 1824, Gregory sailed a 64 gun frigate to Greece for the revolutionary government. From 1824-1828 he served at the New York Navy Yard, and in 1831 reported to the Pacific Station for a 3-year cruise in command of Falmouth. Gregory served as commander of the Station for 1 year.

From the Pacific, Gregory, appointed a Captain in 1838, sailed to the Gulf of Mexico, where he commanded North Carolina and Raritan and served in the blockade of the Mexican coast during the war with that country. After the Mexican War, Gregory commanded the squadron off the African coast, with Portsmouth as his flagship, until June 1851. Returning to the States, he became Commandant of the Boston Navy Yard in May 1852 and served there through February 1856. His subsequent retirement ended a navy career which spanned nearly 50 years. When the bloody Civil War rolled across the land, Gregory returned to naval service to superintend the building and fitting out of naval vessels in private shipyards. Promoted to Rear Admiral 16 July 1862, he served throughout the 4 years of war and then retired again. Admiral Gregory died 4 October 1866 in Brooklyn, and was buried at New Haven, Conn.

After shakedown along the West Coast, Gregory sailed for the Pacific with Hull (DD-350), reaching Pearl Harbor 23 October 1944. Two months of local operations terminated in January 1945 as Gregory began practice for the impending invasion of Iwo Jima, next-to-last great campaign of the long and bloody Pacific war. Gregory sailed for the island 22 January, arriving off Iwo Jima via Saipan and Eniwetok on D-day, 19 February. For the next month she remained off the rocky coast under almost constant fire to screen transports and provide fire support for the invasion forces. Departing Iwo Jima 15 March, Gregory reached Saipan 4 days later to prepare for her role in the Okinawa campaign.

Okinawa, last step prior to invasion of the Japanese home islands themselves, involved over a thousand ships and half a million men, under Admiral R. A. Spruance, in the Pacific's war largest amphibious effort. Gregory joined this modern armada as it sailed from Saipan 27 March and was off Okinawa 1 April 1945 as the first waves of Marines waded ashore to bloody battle. Her task group, under Admiral Jerauld Wright, conducted a "demonstration landing" on the southeast coast, hoping to distract some Japanese attention from the actual invasion along Okinawa's western coast. This diversion complete, Gregory remained off Okinawa on patrol and radar picket station.

On the afternoon of 8 April, Gregory's lookouts spotted three Japanese planes coming in out of the setting sun, a favorite kamikaze device. One of the suicide craft, pieces of fuselage spinning wildly off as Gregory's guns registered hit after hit, crashed into the destroyer amidships just above the waterline to port. Gregory shuddered under the impact and began to slow in the water as power failed in her forward engine and fire rooms flooded. The two other kamikazes mercilessly pressed on their attack, but the wounded DD downed both of them in blazing gunfire. Gregory then steamed to the anchorage at Kerama Retto for temporary repairs, and on 19 April departed Okinawa. After escorting the carrier Intrepid to Pearl Harbor, she sailed for San Diego, reaching there 18 May for battle repairs. While Gregory was still in overhaul, the Japanese surrendered and the destroyer was placed in inactive 'Status, in commission in reserve, at San Diego. She decommnssioned 15 January 1947.

Gregory's rest was to be brief, as Communist forces launched their war in Korea 24 June 1950 and the U.S. Navy joined United Nations forces; she recommissioned 27 April 1951, Comdr. H. C. Lank in command. Reaching Yokosuka, Japan, via Pearl Harbor and Midway 16 August 1951, Gregory immediately began patrol duty along the Korean coast. Her principal duties were screening American carriers, such as Essex and Boxer, from which air strikes against North Korean positions and supply lines were launched; blockading the coast, and participating in coastal bombardment as the tide of war ebbed and flowed along the Korean peninsula. In addition, she was frequently assigned to the Formosa patrol, intended to prevent Communist action against the beleaguered republic. Here Gregory came under fire from mainland Communist Chinese shore batteries. While on a search-and-rescue mission for a downed P2V 19 January 1953, she closed to within 8,000 yards of Nan'ao Tao, a Communist-held island just off the China coast. Though shore batteries opened fire on her Gregory did not return the fire, instead clearing the area immediately to continue her SAR mission.

After the Korean Armistice ended the shooting war in August 1953, Gregory returned to a peactime routine of local operations out of San Diego interspersed with yearly deployments, usually 6 months long, to the Far East. These deployments took her to Yokosuka, Sasebo, Hong Kong, Bangkok, Sydney, Okinawa, the Philippines, and Formosa for training maneuvers with American and other warships. In the fall of 1958 Gregory spent a tension-filled 2% months off the China coast during one of the periodic intensifications of the Quemoy-Matsu crisis.

Gregory earned the Battle Efficiency "E" three times during her post-war career, 1955, 1956, and 1959. Gregory decommissioned at San Diego 1 February 1964 and entered the reserve. She was struck from the Navy List 1 May 1966, renamed Indoctrinator, and now serves as an inoperable trainer at San Diego.