Donald Arthur Gary, born on 23 July 1901 in Findlay, Ohio, enlisted in the U.S. Navy as a fireman 3rd class on 12 December 1919 at the Navy Recruiting Station, Cincinnati, Ohio. After training at the Naval Training Station, San Francisco, Calif., Gary awaited further assignment, first on board the Receiving Ship at San Francisco, and later, in the Receiving Ship at Cavite, Philippine Islands, before joining the gunboat Elcano on 30 June 1920. He served in Elcano (designated as PG-38 on 1 July 1920) as she operated on the Asiatic Station, until returning to the Receiving Ship at Cavite on 15 October 1921, ultimately returning to San Francisco. Gary reported on board survey ship Hannibal (AG-1) at Philadelphia, Pa., on 31 March 1922. Attaining the rank of watertender 2nd class while in this ship, he completed his enlistment and then reenlisted as a watertender 1st class on 17 February 1926 at New Orleans, La. Gary again traveled to Philadelphia, where he reported on board the minesweeper Swan (AM-34) on 13 March. He then transferred to battleship Idaho (BB-42) on 7 September 1928. Gary was discharged at San Pedro, Calif., on 14 February 1930, and then served his next period of reenlistment as a chief watertender on board Idaho.

Over the next several years, Gary served ashore, at the Naval Training Station, San Diego, Calif., and at Navy Recruiting Stations at Los Angeles and San Francisco. He returned to sea on 8 October 1937, joining the heavy cruiser Indianapolis (CA-35). He followed that tour with service in aircraft carrier Enterprise (CV-6) (3 October-18 December 1939), and heavy cruiser Houston (CA-30) (18 December 1939-17 February 1940), before rejoining Indianapolis to round out his period of enlistment on 27 January 1941 at Pearl Harbor, Territory of Hawaii. Reenlisting on board Indianapolis, Gary remained in that ship until 8 February, at which time he began the journey eastward to the headquarters of the Third Naval District. He served there when the Japanese attack triggered the United States’ entry into World War II, and duty at the Eastern Sea Frontier followed, from 31 December 1941-1 December 1943, during which time he received his commission as a lieutenant (junior grade) on 11 November 1943.

Gary briefly continued his service with the Third Naval District at New York City, and in December 1943 was assigned to the office of the Assistant Inspector of Machinery, Babcock and Wilson Company, Barberton, Ohio. On 21 December 1944 he joined aircraft carrier Franklin (CV-13), shipping out with her to fight the Japanese.

On 18 March 1945 Task Force 58, Vice Adm. Marc A. Mitscher in command, supported Operation Iceberg, the invasion of Okinawa in the Ryūkyū Islands. Through 22 March ten heavy and six light carriers launched raids against Japanese airfields and shipping at Kyūshū and Honshū, Japan, claiming the destruction of 482 enemy aircraft by aerial attack and 46 by antiaircraft fire. The enemy struck back vigorously and on 19 March, a Japanese bomber dropped two 550-pound bombs on Franklin, near 32°01'N, 133°57'E, igniting fires that exploded ordnance and fuel among planes spotted on the flight deck or parked below, demolishing part of the flight deck, and wrecking the hangar and gallery deck spaces. Flooding from the firefighting caused a heavy list, sailors evacuated the machinery spaces because of the smoke and heat, and the ship lost power.

Gary was on the third deck when the enemy bombed Franklin. The horrific explosions and fires terrified many of the men trapped in a smoke-filled messing compartment, but he calmed his shipmates, assuring them that he would find a way out. Repeatedly groping through dark, debris-filled passageways, he ultimately discovered a path of escape, and staunchly struggled back to the compartment three times, braving menacing flames, flooding water, and the ominous threat of additional explosions, on each occasion calmly leading men through the blanketing pall of smoke. Later, he organized and led fire-fighting parties in the blazing inferno of the hangar deck, and when Sailors learned that the damage rendered firerooms 1 and 2 inoperable, he entered number three fireroom and directed men in raising steam in a boiler in the face of extreme hazards. Gary subsequently received the Medal of Honor for his “inspiring and courageous” leadership, and for his “self-sacrificing service under the most perilous conditions.” Despite 724 men killed or missing and 265 wounded, following brief tows Franklin sailed under her own power to New York.

Gary attained the rank of lieutenant commander on 19 March 1946. Detached from Franklin on 17 February 1947, he reported as engineer officer on the staff of Commander Submarine Group 1, New York Group, Atlantic Reserve Fleet, and on 25 June 1947 was assigned to Naval Disciplinary Barracks, Naval Base, Terminal Island, Calif., where he remained until relieved of active duty pending his retirement, effective 1 June 1950, and was advanced to the rank of commander on the basis of his combat awards. In addition to the Medal of Honor, Gary received the American Defense Medal, American Campaign Medal, Asiatic-Pacific Campaign Medal, and the World War II Victory Medal. Gary died of lung cancer on 9 April 1977 at Garden Grove, Calif.

The first U.S. Navy ship to honor the late Cmdr. Gary, but the third ship named Gary. The first Gary, an escort ship (DE-61), named for Seaman 2nd Class Thomas J. Gary (16 September 1922-7 December 1941), was transferred to the British under Lend Lease, reclassified as a frigate and renamed Duckworth (K.351), and served the Royal Navy from 1943-1945. The second Gary, also an escort ship (DE-326) named in honor of Seaman 2nd Class Gary, was renamed Thomas J. Gary on 1 January 1945 in order to free the name Gary for a light cruiser, reclassified to a radar picket escort ship (DER-326) on 1 November 1956, served from 1943-1973, and was then transferred to the Tunisian Navy and renamed President Bourgiba. The name Gary was assigned to a light cruiser (CL-147) on 1 January 1945, but was cancelled on 12 August 1945 prior to the start of her construction.

An Iranian mine damaged guided missile frigate Samuel B. Roberts (FFG-58) in the Persian Gulf on 14 April 1988. On 18 April the U.S. launched retaliatory Operation Praying Mantis against the Iranian-occupied Rakhsh, Salman (Sassan), and Sīrrī-D (Nassr) oil platforms. Gary coordinated her efforts with naval aircraft while protecting Mobile Sea Bases Hercules and Wimbrown VII during the fighting.

On 13 March 2003, Gary, with an SH-60B of HSL-51 embarked, assisted in the rescue of all eight Iraqi fishermen from dhow Kaptain Muhamadat when she lost steerage and propulsion in heavy seas and capsized 20 miles south of the Iranian coast. 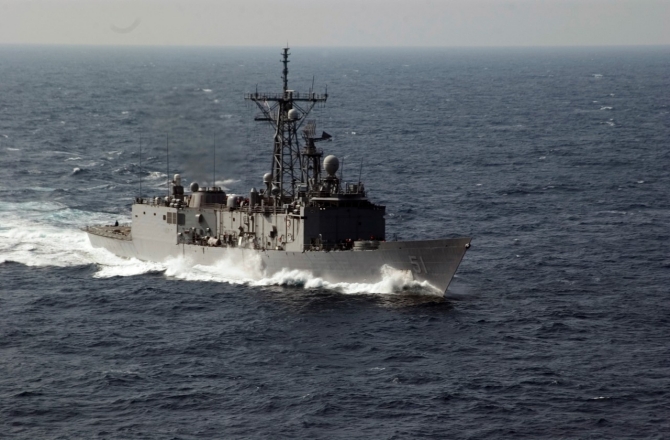 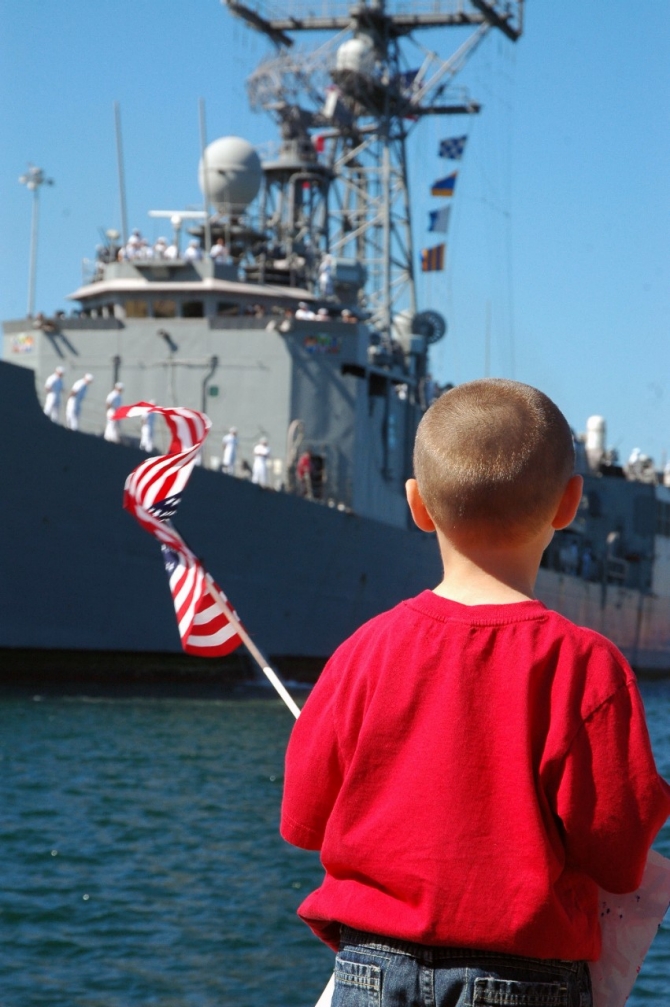 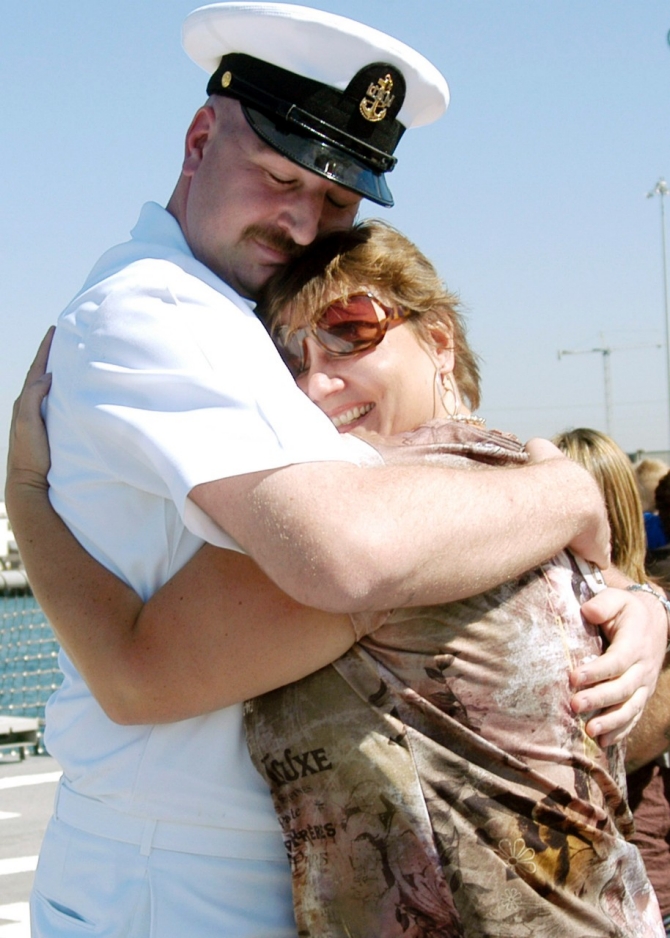 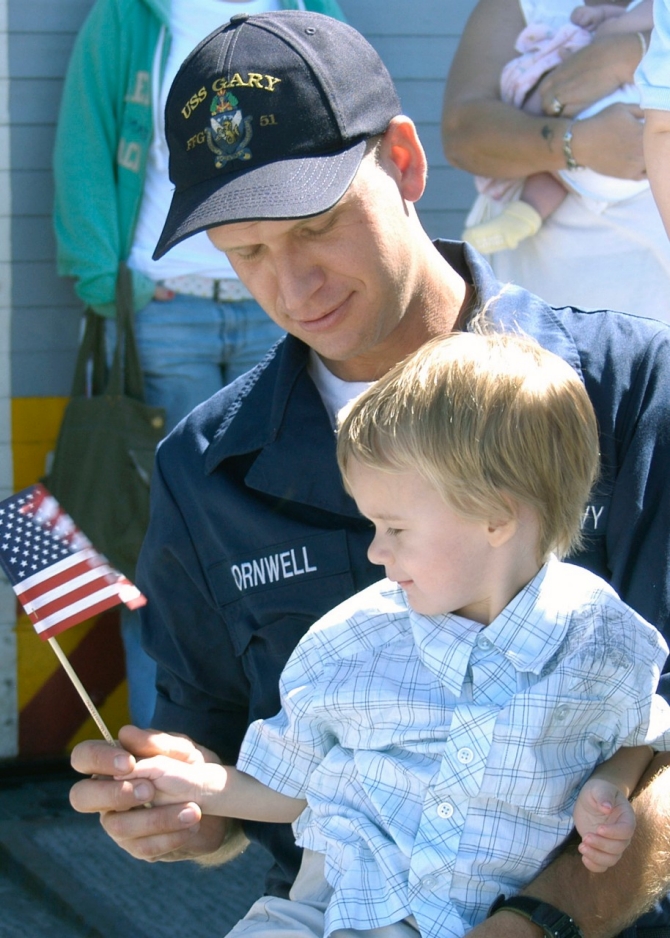 While Gary, with a Coast Guard law enforcement detachment team embarked, deployed for Operation Martillo (Spanish for “Hammer”), a counter-narcotics patrol, in the Eastern Pacific Ocean, she intercepted a suspicious vessel on 4 January 2013. The Coast Guardsmen and Sailors from the ship’s visit, board, search, and seizure (VBSS) team boarded the suspected smuggler and seized 600 pounds of cocaine with an estimated street value of $22 million. “This was one of those vessels we were chasing in the dark,” Leatrice Daniels, Gary’s embarked Naval Criminal Investigative Service (NCIS) agent explained, “There was great open communication with everybody involved. Everything just flowed, from pursuit to initial contact and boarding.” The investigators deemed the smuggler a hazard to navigation and sank her. This case concluded a hectic week in which Gary’s crewmembers and Coast Guardsmen boarded three boats, disrupting more than 2,000 pounds of cocaine destined for the United States with a street value of $272 million. 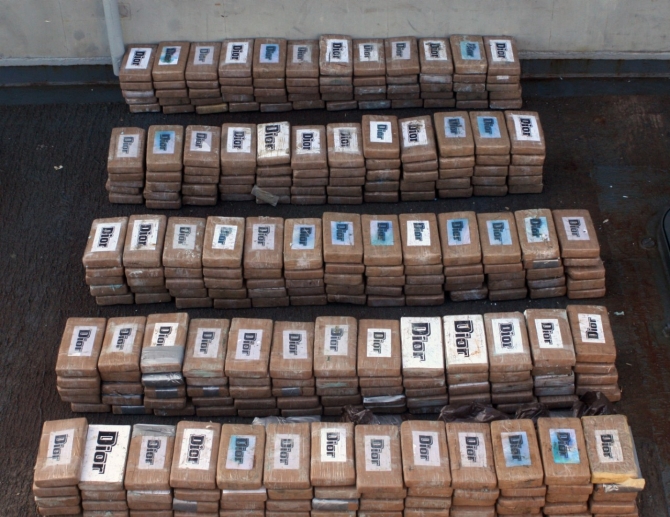 On the night of 8 January 2013, Gary encountered a small vessel loaded with cargo. The boat displayed several indicators that she was involved in illicit trafficking, and the VBSS team and the Coast Guardsmen boarded the vessel. While they searched the boat, she suffered a temporary steering casualty, rendering her dangerous to operate. Gary rigged a tow until the Americans and the mariners restored the boat’s steering. The intervening time enabled the boarders to complete their search and they failed to discover any narcotics on board, and the vessel resumed her voyage two days later.

The ship capped her deployment by seizing an additional vessel smuggling more than 2,200 pounds of cocaine valued at $81 million. “It was a complex operation,” Lt. (j.g.) Christian Gotcher, the ship’s navigation officer, recalled, “involving a law enforcement boarding, boat and helicopter searches, precision driving, detainee handling, and multiple deck operations, but Gary’s crew proved they were fully capable of handling it and scored a big win.” 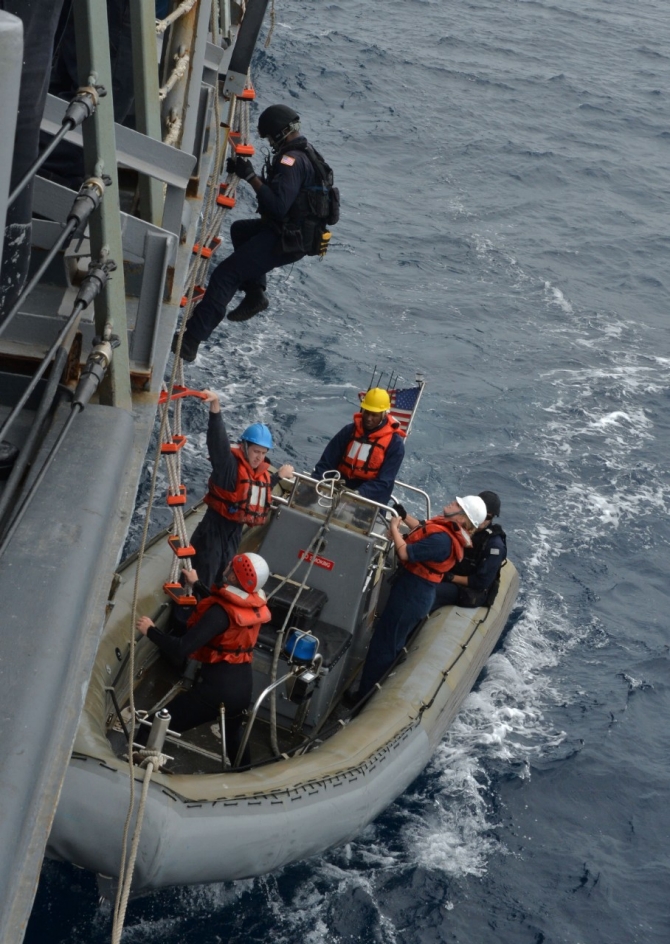 Gary was decommissioned on 23 July 2015 at Naval Base San Diego, Calif.