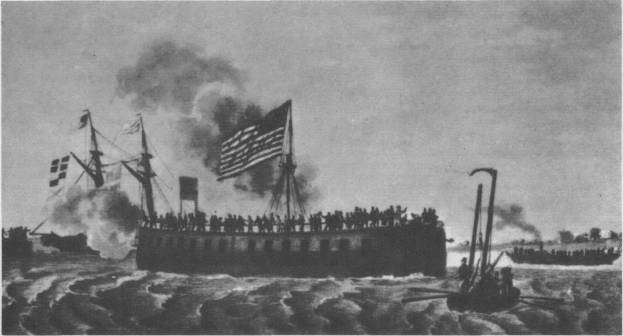 Robert Fulton, born in Little Britain, Pa., in 1765, had a distinguished career as a painter before patenting his first invention, a double inclined plane to replace locks in canals, in England in 1794. His numerous ingenious and influential inventions included a prototype submarine, Nautilus, amphibious boats, and the first commercially successful steamboat, Clermont. In 1814 and 1815, he built the first war steamer, known both as Fulton and Demologos. He died in New York City 24 February 1815.

The first Fulton (or Demologos), a catamaran steam frigate, was completed after Robert Fulton's death, and made successful trial runs in the summer of 1815. With the close of the War of 1812, it was decided not to fit her put for service, but she was delivered to the Navy in June 1816, and placed in ordinary at Brooklyn Navy Yard. Housed over, she was used as a receiving ship until 4 June 1829, when her magazine exploded, killing 30 men, wounding many others, and totally destroying the ship.