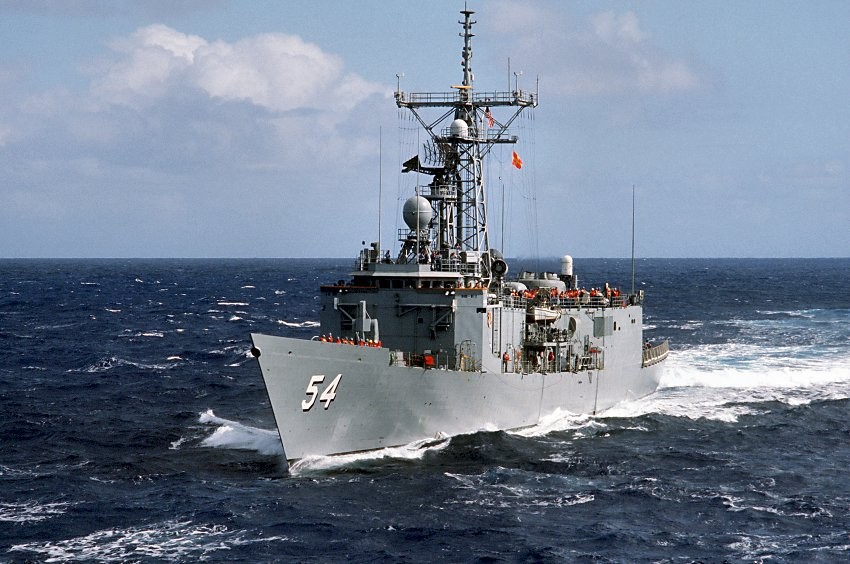 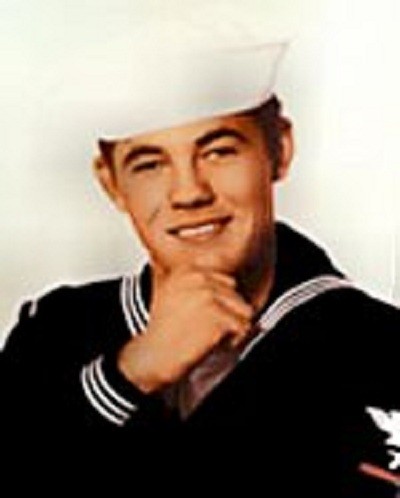 Reenlisting on 11 February 1965, Ford served at Long Beach, Calif., and in the Mare Island Group of the Pacific Reserve Fleet, before he transferred to Danang, South Vietnam, on 4 March 1966. Ford subsequently returned to sea, serving successive tours in destroyers George K. MacKenzie (DD-836) and Henderson (DD-785), where he remained until the end of his second enlistment (30 August 1967).

For the next four months, Ford served as a river patrol boat (PBR) Sailor, monitoring and inspecting the boats and their cargo lists that plied the many rivers and coastal waterways of the area. He matched wits with a cunning and resourceful enemy, who often interrupted the otherwise mundane routine with deadly earnestness. On 21 June 1968, Ford served as the aft machine gunner on board PBR-750 as part of a two-boat (with PBR-723) patrol operating in the upper My Tho River near the town of Cai Be. In addition to her crewmen, PBR-750 had a South Vietnamese policeman and three People’s Liberation Armed Forces (PLAF, usually erroneously called Viet Cong or “VC” by Americans) suspects on board from a previous encounter. The boats maneuvered on the river when they spotted a sampan fleeing into the nearby Rach Cu La canal. The two patrol boats chased and captured the sampan, 100 meters further up the canal.

As PBR-750 returned to the river with the captured sampan in tow, a PLAF patrol ambushed the patrol boat, unleashing a devastating barrage of heavy machine-gunfire and rockets. Two explosive B-40 rockets struck Ford’s boat, immediately killing Lt. William E. Dennis, the patrol leader, and BM1 Scott C. Delph, the coxswain, and setting the craft ablaze. The burning boat veered out of control toward the beach as at least three more rockets struck her. The initial barrage seriously wounded Ford, but he maintained a steady, heavy volume of fire until he perceived that PBR-750 was out of control.

The crewmen of PBR-723 observed that despite point-blank enemy gunfire, Ford, his clothes ablaze, pushed “wounded crewmen from the burning boat.” He then entered the water, where a burst of machine gun fire killed him. The crewmen of PBR-723 rescued the two sailors that Ford pushed into the water from PBR-750, as well as the Vietnamese policeman and one of the PLAF suspects. The surviving boat fired all of her machine gun ammunition, and then sped from the area, her men shooting their sidearms at the enemy. The Americans later stripped PBR-750 of her armament and sank the boat. South Vietnamese troops recovered Ford’s body on 25 June. In recognition of his bravery, Ford subsequently received the posthumous award of the Navy Cross.

The guided missile frigate completed her first deployment during a voyage to the Western Pacific and Middle East Force (17 August 1987–17 February 1988). She took part in Operation Earnest Will, an operation to maintain freedom of navigation within the Persian Gulf, that included renaming and reflagging 11 Kuwaiti tankers. 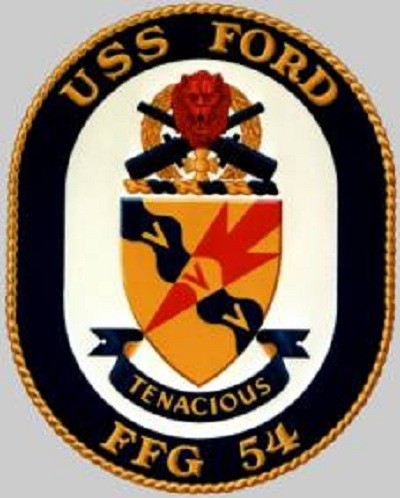 The predominant colors of dark blue and gold are traditionally associated with the Navy; blue to represent the sea and gold to signify excellence.

The Shield
The various designs on the shield depict the heroic naval career of Gunner's Mate 2d Class Patrick O. Ford, who gave his life for his fellow sailors and for his country. The colors yellow and scarlet allude to the South Vietnamese flag. The wavy blue band symbolizes the My Tho River, the site of the battle in which Ford gave his life to save several of his shipmates on board PBR-750. The Roman numeral "V" identifies the attachment of this vessel to River Squadron Five. The scarlet spearhead issuing from the left, or sinister, side of the shield is indicative of the PLAF ambush of PBR-750. The scarlet color of the central figure depicts the result of the attack, where hostile rockets set the boat ablaze.

The Crest
The scarlet lion's head is symbolic of the courage and self-sacrifice that Ford exhibited. The crossed naval cannons represent his rating as a Gunner's Mate. The inverted laurel signifies the tragic end of the story. The cross below center denotes the posthumous award of the Navy Cross.