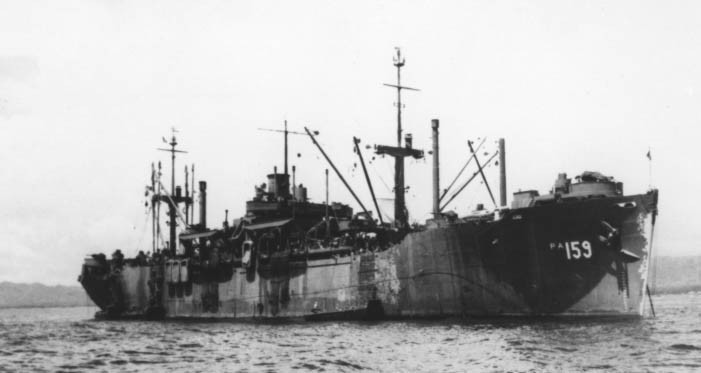 A county in western Ohio.

Darke (APA-159) was laid down on 14 June 1944 under a Maritime Commission contract (MCV Hull 125) at Portland, Ore., by Oregon Shipbuilding Corp.; launched on 29 August 1944; sponsored by Mrs. Joseph A. Hanson, the wife of a shipyard worker; transferred to the Navy at Astoria, Ore., on 10 October 1944; and commissioned there the same day, Capt. McFarland W. Wood in command.

After fitting out, Darke, initially adjudged unready for “extended foreign service” because of a shortage of contractor-furnished spare parts, reported for shakedown on 21 October 1944. Then, following that early training in the waters of Puget Sound, the ship departed Seattle, Wash., for San Pedro, Calif., on 25 October. Darke arrived at her destination on 31 October, then continued her shakedown. Shifting thence to Port Hueneme, Calif., she sailed from that port on 4 December 1944, and arrived at Pearl Harbor, T.H., on 10 December.

Following that stint of training in Hawaiian waters, Darke sailed from Pearl Harbor on 27 January 1945 for the Marshall Islands as part of Task Group (TG) 51.12. She reached Eniwetok on 5 February, then sailed for the Marianas six days later. After taking part in practice landings at Saipan following her arrival there on 16 February, the attack transport sailed to participate in the invasion of Iwo Jima, landing elements of the 5th Marines on D-day (19 February). Then, after embarking casualties and unloading cargo, the ship sailed on 25 February to return to Saipan, arriving there on the 28th.  Leaving the Marianas in her wake on 5 March, Darke joined other attack transports off Guam (12-13 March) and proceeded to the New Hebrides, arriving at Espiritu Santo on 15 March, where she embarked 1,231 men and equipment of the U.S. Army’s 106th Regiment, 27th Division. She sailed on 25 March for Saipan, pausing at Ulithi, in the western Carolines, the staging area for the invasion of Okinawa, en route (3-4 April). She then participated in the landings at Okinawa beginning on 9 April, disembarking men, then receiving casualties and unloading cargo, before sailing on 14 April to return to Saipan, arriving at her destination on 18 April.

Darke sailed from Saipan on 21 April 1945 for the western Carolines, arriving at Ulithi on 23 April for supplies and voyage repairs.  She pushed on for Guam on 24 May, embarking two new medium landing craft (LCM-6s) the following day. After unloading cargo at Leyte, P.I., on 29 May, she continued on to Subic Bay on the 31st, reporting to Commander, Transport Squadron 16, for duty.  Departing Subic Bay on 22 June, she arrived at Manila the next day, sailing on the 28th to return to Subic Bay, arriving the same day. She then carried out training with army units into late August of 1945, proceeding from Subic to Lingayen in convoy SL-31 (25-26 July), then from Lingayen to Subic in convoy LS-61 (17 August), before moving on to Batangas in convoy SB-4 (19-20 August), thence back to Subic. With units of the U.S. Army’s 8th Cavalry Regiment, 1st Cavalry Division, embarked, Darke sailed in TG 33.1, bound for the former enemy homeland.

Standing in to Tokyo Bay on 2 September 1945, she disembarked the landing force, then sailed to return to the Philippines two days later, reaching San Pedro, Leyte, on the 11th. Embarking 1,332 men from the U.S. Army 41st Infantry Regiment at Zamboanga, the transport departed Leyte on 22 September, arriving at Okinawa on the 25th but sailing three days later in response to a typhoon warning (28 September), then continuing on to Hiro Wan, Honshu, arriving on 6 October to participate in the occupation of the former Japanese naval base at Kure.

“Before daybreak on the morning of October 7, 1945,” one observer on board Darke later wrote, “all the boats…were formed in assault formation and loaded with assault troops of the 41st Infantry Division. At daybreak the boats…entered the narrow channel which separates Hiro Wan from Kure Wan. As the formation moved through the narrow, crooked channel both banks were lined with curious Japanese watching the parade of the landing boats. The countryside resembled the famed canals of Venice with waterfront office buildings, stores, and residences, yes, and gun emplacements, pill boxes and air raid shelters carved out of the mountain side. Upon emerging from this canal city to Kure Wan at long last we found the Jap Navy. Sunken hulls of aircraft carriers, cruisers, and battleships and destroyers were seen throughout the bay. Nearer Kure flotillas of unharmed Japanese vessels were at anchor. However, total ships afloat would not have numbered over forty, including a large number of 2 man submarines. The troops landed at Kure Naval Base, just 14 miles from Hiro Shima [Hiroshima]. Kure itself had been literally pulverized and leveled. The entire area was flat and desolate with nothing but powdered brick about 6 inches deep to mark the grave of this12 square miles that had been Japan’s Chief Naval Base. Upon return to the ship, some 18 miles distant in Hiro Wan, cargo unloading was continued. All hands turned to and did an outstanding feat. With the help of bakers, barbers, corpsmen, storekeepers, laundrymen, cobblers, sailmakers, and pharmacist[’s] mates, the Darke unloaded her cargo in 36 hours and steered back to the Inland Sea of Japan…”

Assigned to TG 16.12, part of Operation Magic Carpet, the massive movement of veterans back to the United States, on 10 October 1945, Darke cleared Hiro Wan the next day and reached Guam on 16 October, where she underwent a drydocking. Sailing once more on 25 October, the ship arrived off Guadalcanal on the 31st, embarking 1,292 passengers. Sailing the same day, she reached Noumea on 3 November, disembarking 90 passengers but adding 702 more to her roster. Sailing for San Francisco the next day (4 November), Darke, assigned while en route to the block of transports assigned to transport returning troops between the Marshalls and Gilberts and San Francisco, reached ’Frisco on 18 November and disembarked the men she had brought from the Solomons and the New Hebrides. Then embarking 145 passengers for transportation to Pearl, she sailed on 30 November for Hawaiian waters, arriving on 7 December. She then brought back 2,176 men to ’Frisco (9-15 December). While she had been en route, Commander, Marshalls-Gilberts Area, decided that she was “not needed [in that area] for personnel lift” and requested that Darke be diverted “to another area for Magic Carpet lift…” Subsequently, after embarking 11 west-bound passengers, she sailed from San Francisco on 15 December, and reached Pearl four days before Christmas of 1945 [21 December].

Returning to the Marshalls on 4 January 1946, Darke embarked 479 passengers at Eniwetok, then sailed on 18 January for Kwajalein, arriving on the following day to embark 776 more passengers. Pushing on on 20 January, she paused at Pearl Harbor (25-28 January) to embark 1,113 more people to transport back to the west coast, then sailed for San Francisco, making port on 3 February.  Underway again a week later, Darke got underway from San Francisco for the east coast of the United States on 10 February. Transiting the Panama Canal on 19 February, the ship cleared the Canal Zone on the 22nd, and reached Norfolk, Va., on the 27th.  She was decommissioned on 17 April 1946.

Transferred to the U.S. Maritime Commission (later the Maritime Administration) for disposal on 22 April 1946 Darke was placed in the James River group of the Reserve Fleet. She was stricken from the Navy list on 1 May 1946. The ship underwent a period of repairs (26 January-14 March 1955) but never returned to active service. Sold on 17 July 1974 to Sparreboom Shipbrokers, the Netherlands, the veteran of the landings at Iwo Jima and Okinawa, the occupation of Japan, and Operation Magic Carpet was removed from the National Defense Reserve Fleet on 5 September 1974 to be broken up for scrap.