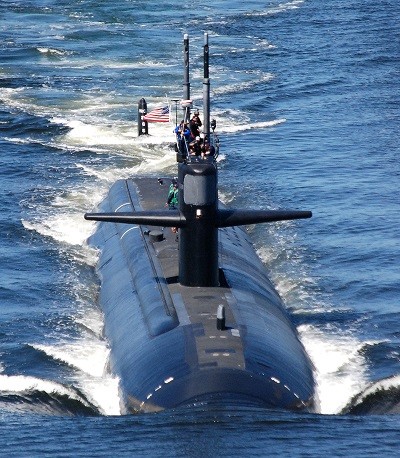 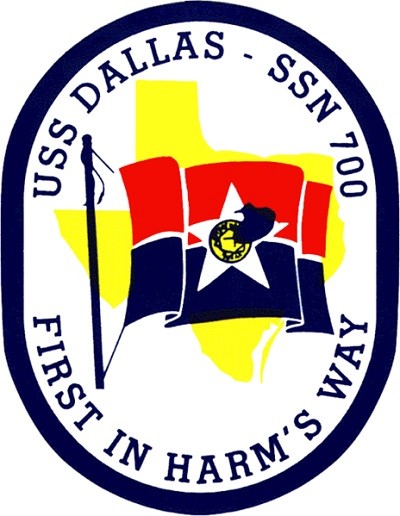 A city in Texas.

Dallas deployed once to the Indian Ocean, three times to the Mediterranean, and seven times to the North Atlantic. She operated initially with Submarine Development Squadron 12 out of Naval Submarine Base New London, Conn. The submarine carried out testing at the Atlantic Undersea Test and Evaluation Center off Andros Island and in Exuma Sound in the Bahamas in the summer of 1981. On the afternoon of 27 August, however, she ran aground on a coral reef while making preparations to transfer the Mk 48 Torpedo Certification Team to a small boat. Dallas sustained minor damage and did not report casualties, though salvage ship Sunbird (ARS-15) and boats from the range rendered assistance. The submarine returned to Groton on the surface and completed repairs to the forward group of main ballast tanks and the rudder in drydock at General Dynamics’ Electric Boat Division Shipyard. Following the yard work, she took part in LantSubASWEx 1-82, a three-week exercise that included searching across a large area for another submarine.

The boat began her first full year of commissioned service on 2 January 1982, when she set out to complete a five-month post shakedown availability at Newport News Shipbuilding and Drydocking Company, Va. Following the yard work she carried out a series of Mk 48 torpedo proficiency firings and tests, culminating in sound trials at the Atlantic Undersea Test and Evaluation Center. Dallas played cat and mouse with two other U.S. submarines during LantSubASWEx 5-82, but then entered drydock four different times to make emergency repairs to her secondary propulsion motor, one of which required a brief cruise to Kings Bay, Ga.

Dallas set out on her maiden deployment, a voyage to the Mediterranean that included visits to La Maddalena (Sardinia) and Naples, Italy, and Toulon, France (3 December 1982–29 April 1983). Upon the boat’s return, she took 60 midshipmen to sea to help familiarize them with submarine operations in June. The attack submarine rounded off the year on 8 December 1983, by marking her first visit to Texas when she slid into Galveston. About 3,000 people toured Dallas, and 60 crewmen of the ship’s company enjoyed all expenses paid trips to Dallas, where they attended numerous media and civic events, including recognition at a meeting of the Dallas City Council.

The submarine completed a six-month global circumnavigation, a cruise that included rounding the Cape of Good Hope and passing through the Panama Canal, when she deployed to the Indian Ocean (18 May–8 December 1984). The submarine operated at times with two carrier battle groups and a maritime patrol squadron, and visited Diego Garcia, British Indian Ocean Territory, and Perth and Albany in Western Australia. Following a much need upkeep Dallas participated in two fleet exercises, LantSubASWEx 3-85 and ReadEx 1-85 in the spring of 1985. The attack submarine’s secondary propulsion motor continued to cause problems and she repaired the system in drydock in June, and throughout July participated in Third Fleet exercise ReadEx 2-85. She passed back through the Panama Canal to carry out training exercises and testing off the Bahamas, and also visited Port Everglades, Fla.

Dallas deployed (January–May 1986) to the Sixth Fleet in the Mediterranean during a crisis with the Libyans. The U.S. initiated a series of ‘Freedom of Navigation’ exercises in the Gulf of Sidra below a “line of death” that Libyan strongman Col. Muammar al-Qadhafi announced that stretched across the gulf at 32º30’N. The confrontation escalated and the Americans launched Operation Attain Document III (Prairie Fire), an armed response to Libyan-sponsored acts of terrorism (24–27 March). Vice Adm. Frank B. Kelso II, Commander, Sixth Fleet, deployed elements of Task Force 60 including aircraft carriers America (CV-66), Coral Sea (CV-43), and Saratoga (CV-60), with upward of 250 aircraft and 26 ships and submarines including Dallas across the line and triggered Libyan action. Naval aircraft flew 1,546 sorties, 375 of them south of the line, and the Libyans ineffectually attempted to counter the strikes.

Dallas continued her operational connection with Saratoga when, in January 1987, she provided target service for the carrier and her embarked aircraft while in the Caribbean, a voyage that included a visit to St. Croix in the Virgin Islands. The pounding at sea impacted the sonar dome, however, and the submarine reported that she corrected the “material problem” while in drydock at Electric Boat into February. The following month she (separately) carried out MK 48 torpedo and acoustic tests, but then (March–April) deployed on short notice and spent 35 days supporting a major antisubmarine warfare exercise in the Western Atlantic Ocean. Dallas took part in operations and exercises covering many aspects of submarine warfare in May, which included more than 30 exercise weapon firings. The submarine embarked midshipmen for their summer orientation cruise in August.

Following that voyage she deployed to the North Atlantic and European waters (September–December 1987). Dallas joined more than 100 allied ships and submarines from 11 countries during NATO fleet exercise Ocean Safari ’87, which was designed to test the alliance’s ability to defend against concentrated attacks and to secure the sea lanes of communication. She then took part in acoustic antisubmarine warfare project Sharem 71 in Vestfjord, Norway. The French invited Dallas to take part in the commemoration of the 70th anniversary of the U.S. entry into World War I on [6 April] 1917, and Cmdr. Carl B. Dunn, the boat’s commanding officer, laid a wreath at the war memorial at Brest, France, on 6 October 1987. The next year (May–July 1988) Dallas deployed once more to the North Atlantic.

In popular culture, Dallas figures notably in Tom Clancy’s novel and the film adaptation, The Hunt for Red October. Some of the motion picture’s sequences were actually shot on board another Texas namesake city, Houston (SSN-713). Prior to the film’s release in 1990, Clancy visited Dallas in August 1988. The following month, Dallas ended her time carrying out essential research and development projects with Submarine Development Squadron 12 when she shifted to Submarine Squadron 2, also at New London. Dallas took part in Operation Fertile Virgo and in Naval Reserve Training Exercise 1-88 in Atlantic waters, in September. The boat then (2 October 1988–September 1989) completed a depot modernization period, a new program designed to cut costs and improve the turn-around on the Los Angeles class submarines’ initial overhauls by implementing a short and highly intensive modernization availability, at Portsmouth Naval Shipyard at Kittery, Maine. Dallas reported that the program focused on minimizing her time away from the “front line.” The submarine then (October–November 1989) took part with several other ships and submarines in LantSubASWEx 1-90, a major antisubmarine warfare exercise in the Atlantic Ocean. Just before the end of the year she began Chief of Naval Operations (CNO) Project 01387-07, an operational evaluation of the BQQ-5D sonar system, which had been installed during her depot modernization period.

Dallas deployed to the Sixth Fleet in the Mediterranean for Operations Desert Shield and Desert Storm to drive the Iraqis from Kuwait (7 August 1990–January 1991). The submarine also took part in NATO exercise Display Determination, and returned and continued a high pace tempo of operations that included scoring outstanding marks in a torpedo competition in May, and in July 1991, embarked midshipmen for a brief training cruise.

Dallas again attained top marks in a torpedo competition (February–March 1992), but that autumn took time to host her “Tigers” (male dependents) on a brief cruise (September–October) and then (October–November) some VIPs. The increasingly seasoned submarine rounded out the year by taking part in antisubmarine exercises (November–December 1992). Dallas hosted two sets of visitors from Texas in April 1993 when VIPs and then the “Dallas Morning News” visited the boat, and the newspaper published an article about the submarine and her accomplishments. The boat participated in antisubmarine exercises (June–July), and then (October–December 1993) deployed to the North Atlantic, a voyage that enabled her crewmen to enter the ‘Order of the Blue Nose’ as they crossed the Arctic Circle. Dallas carried out acoustic trials off Andros Island in March 1994, and again ended the year (June–September 1994) by deploying into the North Atlantic and across the Arctic Circle.

Dallas accomplished her usual post-deployment yard work and in addition, provided services for tactical readiness exams in January 1995. The submarine then (April–July) deployed overseas. Following the boat’s homecoming, she accomplished an overhaul at Portsmouth (October 1995–4 February 1998), and then returned to New London. The attack submarine was fitted with a Drydock Shelter configuration, an array of air, water, and hydraulic systems that enable her to employ a Sea, Air, Land (SEAL) Delivery Vehicle. In addition, Dallas operated as a mother submarine for deep submergence rescue vehicle DSRV 1. She vindicated her conversion to accommodate DSRV 1 during Sorbet Royal 2000, a triennial NATO submarine escape and rescue exercise involving rescue specialists from the Sixth Fleet and the Italian and Turkish naval forces in the eastern Mediterranean (29 August–7 September 2000).

Dallas deployed to the Mediterranean, Indian Ocean, and Arabian Gulf (29 July 2006). The submarine primarily supported the Fifth Fleet’s maritime security operations, which were designed to help set the conditions for security and stability in the maritime environment, and to complement counter-terrorism and the security efforts of regional nations. Dallas accomplished mid-deployment maintenance and voyage repairs during a week’s visit to Naval Support Activity Bahrain early in November and fittingly returned to sea on Veteran’s Day. Dallas returned to the region the following year and celebrated her homecoming to Groton on 21 August 2008. During the voyage she visited Diego Garcia; Bahrain; Limassol, Cyprus; Gibraltar; and Rota, Spain. The submarine completed a pre-inactivation restricted availability at Portsmouth (3 December 2008–2009), primarily in Drydock No. 2 and then alongside Berth No. 6. The town of North Hampton, N.H., hosted Dallas, and the work included installing an experimental conformal acoustic velocity sonar large vertical array.

Dallas steamed more than 34,000 miles during a deployment to the Mediterranean and the Middle East (May–25 November 2013), and visited Bahrain, Diego Garcia, Spain, and Portugal. Upon the boat’s return to New London, MMFN Sebastian Lefever held his baby girl Rilynn for the first time. Lefever’s wife Kara gave birth to their daughter on 9 July, just as the submarine stood out of Bahrain.

Adm. Jonathan W. Greenert, the CNO, sent an action memo to Secretary of the Navy Raymond E. Mabus Jr., on 4 December 2013, recommending striking and disposing a number of vessels scheduled to retire from naval service. The list included Dallas, which was scheduled for 26 September 2014. The Navy announced on 30 May 2014, however, that it would extend Dallas’ service through FY 2017, and intended to retire Norfolk (SSN-714) in her stead, which was consequently decommissioned at Naval Station Norfolk, Va., on 11 December 2014.

On 2 February 2016, Capt. Oliver T. Lewis, Commander, Submarine Squadron 12, relieved Cmdr. Edward Byers, Dallas’ commanding officer, “due to loss of confidence in his ability to command.” Cmdr. Jack E. Houdeshell, who had previously led Dallas and was serving as the squadron’s deputy commander, for a second time assumed command of the boat. Because of the switch with Norfolk that extended her service life, Dallas completed the submarine’s final deployment, a voyage to the Mediterranean and the Middle East, when she returned to New London in time for Thanksgiving on 22 November 2016.

Dallas set out on her last cruise when she turned her prow to sea for the west coast on 24 March 2017, and on 22 May 2017 was placed out of service in advance of her decommissioning, at Puget Sound Naval Shipyard, Bremerton, Wash.