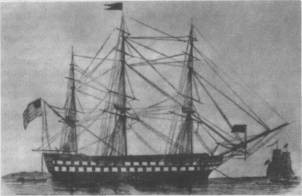 Caption: Illustration for manning the yards, photographed from Watch, Quarter and Station Book, Ship-of-the-line Columbus. Illustrations were in color, drawn by an unnamed ship's yeoman, in 1847.

The second Columbus, rated a 74-gun ship-of-the-line, was launched on 1 March 1819 by Washington Navy Yard, and commissioned on 7 September 1819, Master Commandant J. H. Elton in command.

Clearing Norfolk, Va., on 28 April 1820 Columbus served as flagship for Commodore William Bainbridge in the Mediterranean, until returning to Boston, Mass., on 23 July 1821. Serving as a receiving ship after 1833, she remained at Boston in ordinary until sailing to the Mediterranean, on 29 August 1842, as flagship for Commodore C. W. Morgan. On 24 February 1843, she sailed from Genoa, Piedmont (Kingdom of Sardinia), and reached Rio de Janeiro, Brazil, on 29 July to become flagship of the Brazil Squadron, Commodore D. Turner in command. She returned to New York on 27 May 1844 for repairs.

After embarking Commodore J. Biddle, Commander East Indies Squadron, she sailed on 4 June 1845, for Guangzhou (Canton), China, where on 31 December, Biddle exchanged ratified copies of the first American commercial treaty with the Chinese. Columbus remained there until April 1846 when she sailed for Japan to attempt opening that country to American commerce. She raised Tōkyō Bay 19 July in company with Vincennes but achieved no success. Recalled at the outbreak of the Mexican War Columbus reached Valparaiso, Chile, in December and arrived off Monterey, Calif., on 2 March 1847. Too large to be useful in the California operations the ship sailed from San Francisco, Calif., on 25 July for Norfolk, arriving there on 3 March 1848.

At Norfolk Navy Yard, Columbus lay in ordinary until 20 April 1861, when the withdrawing Union forces sank the ship to prevent her from falling into Confederate hands.