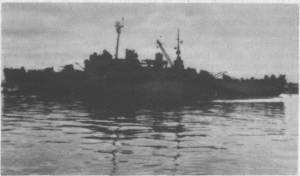 A northward extension of the Appalachian Mountain Range into southeastern New York State.

Catskill sailed from San Diego 12 August 1944 for Hawaii, where she embarked marines, and proceeded by way of Eniwetok for Manus, where she joined the transport group of the Southern Attack Force for the assault on Leyte. This group sailed 14 October for the return to the Philippines, and entered Leyte Gulf without event, anchoring off Dulag 20 October to launch the initial attack. Smooth execution of brilliant plans resulted in a highly successful landing, and Catskill completed her offloading and was able to retire in the afternoon of 22 October, before the commencement of the epic Battle for Leyte Gulf.

Catskill returned to New Guinea, then sailed to Morotai, where from 5 to 10 November 1944 she loaded troops and cargo under almost continuous enemy air raids. As her convoy proceeded north with these reinforcements for Leyte, it came under enemy air attack on 13 November, and Catskill's gunners aided in splashing one of the Japanese aircraft. Unloading in Leyte Gulf took place on 14 November, and Catskill got underway at once for Manus, and New Guinea, where she took part in special training.

Returning to Manus 21 December 1944, Catskill sailed 10 days later with the Lingayen Attack Force, which came under air attack, although not in Catskill's sector, as it made its final approach. On 9 January 1945 the landings were successfully made on beaches so difficult that the Japanese had considered an amphibious assault there impossible. The force was under repeated air attack. Catskill nevertheless accomplished her part of the landing skillfully, and cleared Lingayen for Leyte 10 January. Anchoring 2 days later, she loaded Army troops and cargo for the first reinforcement of Lingayen 27 January.

Arriving in the Solomon Islands 11 February 1945, Catskill began intensive training for the Okinawa operation. On 21 March, she anchored in Ulithi, staging area for the massive assault which was to come, and on 27 March got underway for the initial assault on 1 April, in which she landed units of the 6th Marines. That night, she moved out to sea, and for the next 4 days, returned to the beachhead area daily to complete her unloading of men and cargo. Returning to Saipan 9 April, Catskill continued on to San Francisco, arriving 13 May.

Between 16 May and 14 June 1945, Catskill made a voyage from San Francisco to Pearl Harbor carrying vehicles and general cargo, and steamed to Pearl Harbor once again. She loaded troops there for Eniwetok, Saipan, and Guam, and after carrying out this assignment, proceeded to Manila, arriving 5 July. Here she remained until 20 September, when she sailed laden with Army troops for the occupation of Japan. Catskill anchored in Wakayama Bay 25 September, and cleared Japan 1 October for the Philippines, where she embarked homeward-bound servicemen. She arrived in San Francisco 27 October, and sailed again 10 November on the first of two more voyages to bring troops home from Guam, Ulithi, Peleliu, and Eniwetok.

On 10 February 1946, Catskill arrived at San Diego, where she was placed out of commission in reserve 30 August 1946.