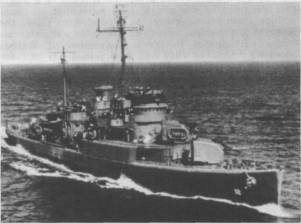 A bay on the coast of Maine.

After a period patrolling and caring for seaplanes off the northwest coast, Casco arrived at Sitka, Alaska, on 5 May 1942, for duty surveying Aleutian waters, laying moorings for seaplanes, and providing tender services. Based at Cold Bay, she operated to Dutch Harbor, Chernofski Harbor, and Kodiak. Consolidated PBY-5A Catalinas of Patrol Squadrons (VPs) 41 and 42 of Patrol Wing (PatWing) 4 flew from Casco and destroyer seaplane tenders Gillis (AVD-12) and Williamson (AVD-2) as they patrolled the likely approaches to the area during the Battle of Midway.

In particular, Casco established an advanced base in Nazan Bay on Atka Island in the Aleutians on 19 July 1942. The station supported seaplane antishipping searches, bombing Japanese positions, and cover for ship bombardments against the enemy garrison on Kiska. Japanese submarine RO-61 torpedoed Casco while she lay at anchor in Nazan Bay on 30 August. The resulting explosion killed five of her men and wounded 20, but prompt and clearheaded action brought flooding to a halt and got the ship underway so that she could be beached and later salvaged. Casco was floated on 12 September, and after emergency repairs at Dutch Harbor and Kodiak, she received a thorough overhaul at Puget Sound Navy Yard.

Casco returned to fog-bound Aleutian duty in March 1943, operating at Constantino Harbor, Amchitka, as tender to Fleet Air Wing Four. In May she steamed to Attu, to care for the PBY-5As conducting antisubmarine patrol and search missions in support of the Army's invasion of Attu in the Aleutians. Here she remained providing the essential base for flights which guarded against further Japanese reinforcement or penetration of the Aleutians. At times, Col. William O. Eareckson, USAAF, flew a Vought OS2U Kingfisher from Casco as a forward air controller during the fighting for the Aleutians. The tender's service in these waters where weather was often as formidable an enemy as the Japanese ended in November, when she sailed for overhaul at Bremerton.

Casco arrived in the Marshall Islands in February 1944 to tend seaplanes of patrol squadrons at Majuro and Kwajalein during their occupation, and later at Eniwetok until September. Temporarily assigned to carry cargo in the buildup for the Philippine operations, she shuttled between Saipan in the Marianas, Ulithi in the Carolines, and the Palaus, also in those islands, until November, then returned to tender duty, in the Palaus until January 1945, and at Ulithi until April. After overhaul at Saipan, she arrived in Kerama Retto on 25 April to care not only for seaplanes, but also for a motor torpedo boat squadron, all engaged in the Battle of Okinawa.

Returning to the west coast for an overhaul and upkeep (July–September 1945), Casco sailed back to the Far East for operations in the Philippinesin October of 1945, and in April 1946, returned home and served in training duty off Galveston, Texas. She was decommissioned on 10 April 1947, and laid up in the Atlantic Reserve Fleet at Orange, Texas.

The Navy loaned Casco to the Coast Guard on 19 April 1949, which reclassified her as a Coast Guard seaplane tender (WAVP-370). As it turns out, Casco operated primarily as a weather ship from Boston, Mass., though proved her utilitarian value multiple times as she rescued mariners in distress and took part in oceanographic experiments in the South Atlantic. She was reclassified to a high endurance cutter (WHEC-370) on 1 May 1966, and on 27 March 1968, helped battle a fire on Boston's Long Wharf.

The Coast Guard returned Casco to the Navy in March 1969, and she was decommissioned on the 21st of that month. The service decided to sink the seasoned ship as a target and two torpedoes sent her to the bottom of the North Atlantic on 15 May 1969.