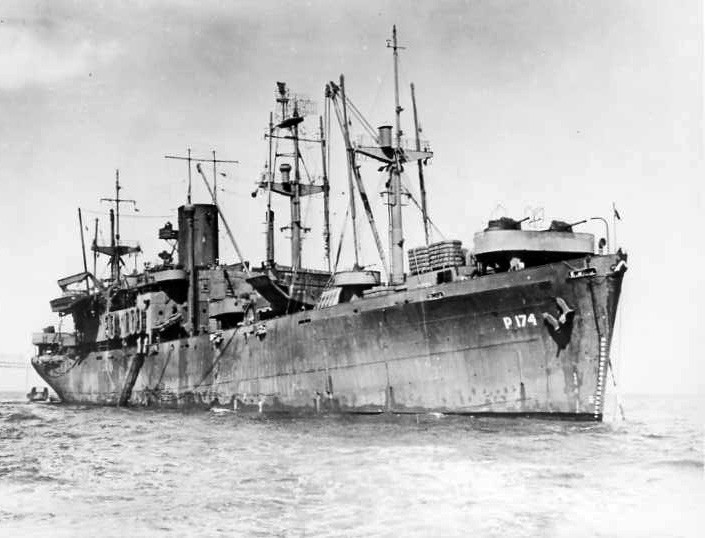 Arlington (AP-174) at anchor in San Francisco Bay, probably during her service as a training ship at the precommissioning training center there, between December 1944 and September 1945. Her color scheme is probably Measure 21 (sea blue). Naval History and Heritage Command photograph, NH 78544.

The first Arlington (AP-174) was named for the county in Virginia; the second Arlington (AGMR-2) (ex-Saipan) was named for that same county, but specifically honoring its being the site of one of the U.S. Navy’s first radio test stations; the third Arlington (LPD-24) was also named for that county, but specifically honors the victims of the Al-Qāidah attack on the Pentagon, the seat of administration for the U.S. Department of Defense, on 11 September 2001. The attack upon the Pentagon killed 189 (all 64 people on board American Flight 77 alone) and injured 125.

The steel-hulled cargo ship Fred Morris was laid down on 11 May 1942 at Wilmington, Calif., by the Consolidated Shipbuilding Corp., under a Maritime Commission contract (M.C .Hull 490); launched on 10 August 1942; sponsored by Mrs. Clarence J. Coberly; and delivered to the Lykes Brothers Steamship Co., Inc., on 6 February 1943.

Built to operate on the South American cargo trade and named for an employee of the Lykes Brothers' lines, Fred Morris operated under civil auspices until taken in hand by the War Shipping Administration (WSA) for conversion to a Navy transport. On 31 January 1944, the ship was renamed Arlington and classified as AP-174. Converted at the Todd Shipbuilding & Drydock Co., Hoboken, N.J., the ship was acquired by the Navy from the WSA on 17 April 1944, and was commissioned at the New York Navy Yard on 18 April 1944, Cmdr. Louis G. McGlone in command.

Following shakedown training in Chesapeake Bay, Arlington loaded cargo and embarked passengers (sailors and marines), and departed Norfolk on 22 May 1944, in company with the escort  vessel Eversole (DE-404), bound for Panama. Transiting the Canal Zone on 28-29 May, the transport reached Pearl Harbor on 13 June. Embarking a capacity lift of casualties and troops, the ship set course to return to the west coast on 17 June, arriving at San Francisco on 23 June. 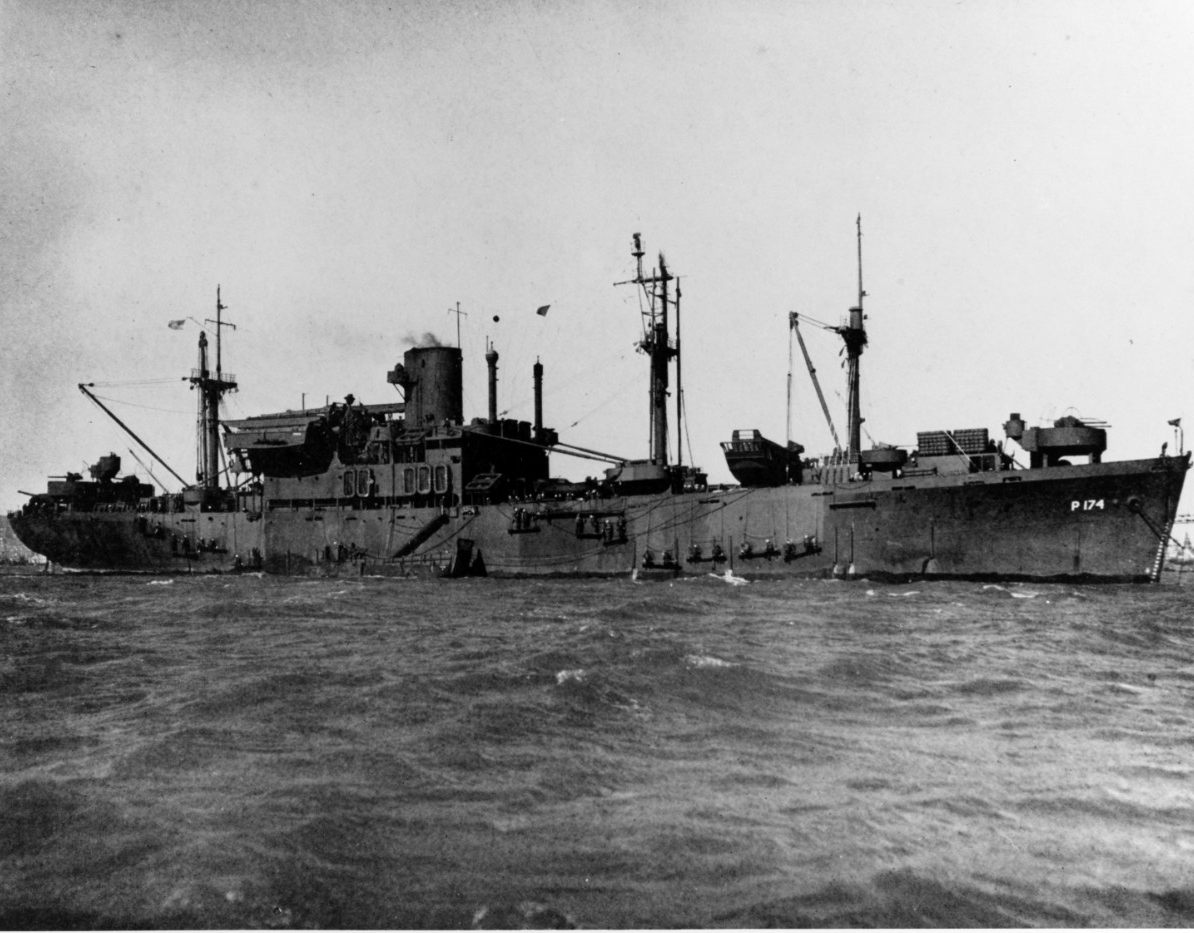 Following a brief availability for work not completed at Hoboken during the initial conversion, Arlington sailed for Seattle on 3 July 1944, arriving there three days later. Assigned duty with the Fleet Operational Training Command, Pacific, Arlington, the flagship for Capt. Melville E. Eaton, Commander, APA [attack transport] Pre-Commissioning School, was attached to the Pre-Commissioning Training Center until 18 December. During that time she trained 40 Navy auxiliary ships' complements on board. Each received nine days of intensive instruction afloat in amphibious operations, gunnery, damage control, seamanship, communications, engineering, first aid, handling of casualties, and navigation. Upon termination of that program in Seattle, Arlington headed for San Francisco, where she arrived on 21 December. She served as a training ship at the Pre-Commissioning Center for auxiliary ships at Treasure Island through the end of the war, her last trainee crew leaving the ship on 15 September 1945.

During her second stint as a training ship, Arlington served as the platform for the instruction of 53 additional crews, each receiving from six to 12 days of instruction afloat. They spent the first part of their instruction at anchor; the last two underway at sea. Besides antiaircraft and surface gunnery drills, other evolutions included underway replenishment, streaming and recovering paravanes, correcting magnetic compasses for deviation, ship-handling, and all phases of seamanship, damage control, engineering and handling casualties. All told, the ship trained approximately 25,000 men at Seattle and Treasure Island.

Relieved of instructional duty on 16 September 1945, Arlington was assigned to Service Force, Pacific, for duty in Magic Carpet, the return of servicemen to the United States. She sailed on 18 September for Okinawa, Tokyo and Yokosuka, Japan, with 1,400 troops embarked, ultimately returning to Seattle on 14 November for repairs and upkeep. She conducted a second voyage to Japan, proceeding via Adak and Attu in the Aleutian Islands, and touched briefly at Tokyo before returning to Seattle the day after Christmas of 1945. Scheduled to be decommissioned, she headed for New York on 13 February 1946, proceeding via San Diego and the Panama Canal.

Decommissioned at the New York Naval Shipyard on 20 March 1946, Arlington was transferred to the WSA on the same day. Her name was stricken from the Naval Vessel Register on 28 March 1946.

Renamed Fred Morris, the ship remained under government ownership into the 1960's. Laid up around 1950, she remained inactive until scrapped in Baltimore, Md., in February 1965.