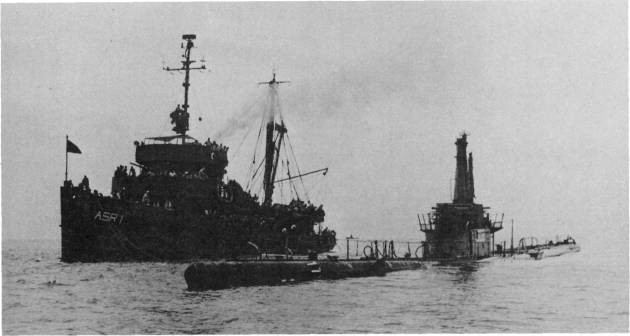 A group of large-headed salt water fishes with oblong compressed bodies found in tropical or subtropical waters. The majority of these fishes are marine and live among reefs in shallow water. One subgroup, cardinal fish, range from two to eight inches in length and are characterized by two dorsal fins, a large mouth, large eyes, and large scales.

The submarine held shakedown in the waters off the New England coast and departed New London on 13 September, bound for Hawaii. Apogon transited the Panama Canal on 25 September and reported for duty on that date to the Commander in Chief, Pacific Fleet. She reached Pearl Harbor on 11 October and commenced three weeks of training. After loading fuel and provisions, Apogon got underway on 3 November for her first war patrol.

Apogon's patrol area comprised the waters within a 60-mile radius of Moen Island and those along the shipping lanes between Truk and Kwajalein. The submarine was acting in support of Operation "Galvanic," the seizure of the Gilbert Islands. After a brief stop at Johnston Island on 5 November to top off her fuel tanks, Apogon continued on to her assigned area. During this patrol, she sighted four contacts deemed worthy of torpedo expenditure and actually attacked three. The only major damage she inflicted occurred on 4 December, when the submarine sanka 2,962-ton Japanese auxiliary, Daido Maru, a former gunboat. On 18 December, she ended her patrol and moored at Midway.

Following a refit there, Apogon proceeded to Pearl Harbor on 26 December for further repairs and training. She left Hawaii on 15 January 1944 for her second patrol, this time in waters surrounding the Marianas. On 1 February, Apogon made the only attack of the patrol. She sighted a six-ship convoy and, soon thereafter, opened fire. The crew heard an explosion and saw their torpedoed target burst into flames. Ten minutes later, the lookout saw about 50 feet of the Japanese ship's stern sticking out of the water, and this soon disappeared. Apogon then attacked another Japanese auxiliary. Although Apogon claimed to have sunk both ships, she was not officially credited with having destroyed either. Apogon ended her patrol after 50 days and returned to Pearl Harbor on 9 March.

Apogon moored beside Bushnell (AS-15) on 10 March to commence refit. The submarine was drydocked at the Pearl Harbor Navy Yard from 15 to 19 March for the installation of two new propellers. After additional training exercises, she got underway on 2 April. She paused at Johnston Island on 4 April to refuel and, later that day, resumed her voyage toward waters south of the Japanese home islands. However, when a crewman was preparing to clean a 20-millimeter machine gun the next day, a live cartridge accidentally left in the chamber discharged and ricocheted into the man's leg. Apogon immediately returned to Johnston Island to transfer the wounded man to the dispensary. The submarine again got underway on 6 April and conducted her entire patrol without encountering any enemy shipping. She finally arrived at Majuro on 22 May.

Refitting began on 23 May, and the submarine got underway on 8 June for trials. Apogon began her fourth patrol, which was in the area between Formosa and the Philippines, in company with Guardfish (SS-217), Thresher (SS-200), and Piranha (SS-389). On 12 July, Apogon and her consorts spotted a nine-ship Japanese convoy sailing with approximately six escorts. The submarines immediately began preparing an attack. The leading Japanese ship of the center column of the formation apparently sighted the wake of Apogon's periscope and turned back to ram the submarine. As Apogon was turning to port to bring her stern tubes to bear, she was struck on the starboard side by the freighter. About eight feet of the main periscope and periscopeshears were torn off, and the radar masts were bent and put out of commission. As a result, Apogon prematurely ended her patrol to return for repairs. She arrived at Midway on 22 July, where crews installed additional bracing on the periscope shears before the submarine proceeded on to Pearl Harbor.

Having reached Pearl Harbor on 26 July, Apogon was dry-docked. Both tail shafts were replaced and realigned, and the periscope, periscope shears, and the radar masts were replaced. The three main engines were also overhauled. On 12 September, Apogon was underway on yet another wartime patrol. She headed for the Kuril Islands area. The submarine claimed to have sunk a Japanese patrol craft on 23 September, but this kill was not confirmed. Four days later, her luck improved for she sank a 2,000-ton cargo ship, Hachirogata Maru. Following this sinking, she rescued two Japanese survivors. The next month proved fruitless, and Apogon arrived at Midway on 28 October, ending her fifth patrol.

After a month of refit, Apogon commenced her sixth patrol on 20 November, again sailing for the Kuril Islands. The only action of this patrol was an attack on a tanker, which the submarine hit and damaged with a torpedo. On 5 January 1945, Apogon arrived in Pearl Harbor for a brief stay before getting underway on 7 January for the Mare Island Navy Yard, Vallejo, Calif., to undergo a major overhaul.

Apogon returned to action on 28 May. Her patrol station was the Kuril Islands-Sea of Okhotsk area. She attacked a convoy of four Japanese ships and escort vessels on 18 June and sank one 2,614-ton transport, Hakuai Maru. On 2 July, Apogon severely damaged a small submarine chaser. The patrol ended on 14 July at Midway.

Apogon began her eighth and final patrol on 7 August. She was assigned to the Marcus Island area. She made no attacks during this patrol because the Japanese capitulated on 15 August. Apogon returned to Pearl Harbor on 2 September and then continued on to San Diego, where she arrived on 11 September. Apogon was placed in reserve there on 1 October. In January 1946, the submarine sailed for Pearl Harbor where she was to undergo preliminary work and tests in preparation to be used as a target in atomic bomb testing. Following completion of this refitting, Apogon arrived at Bikini Atoll on 31 May. She was sunk at Bikini during atomic bomb test "Baker," on 1 July 1946. Her name was struck from the Navy list on 25 February 1947.