Ancon was launched on 24 September 1938 at Quincy Mass., by the Bethlehem Steel Co.; sponsored by Mrs Harry Woodring, wife of the Secretary of War; owned and operated by the Panama Railroad Co.; and placed in service on 22 June 1939 for cargo and passenger service between New York City, N.Y., and Cristobal, Panama Canal Zone.

The ship was taken over by the Army Transport Service on 11 January 1942. She made two voyages to Australia carrying American troops to bolster that continent's defenses before being acquired by the Navy on 7 August 1942. She was placed in commission at the Boston Navy Yard as Ancon (AP-66) on 12 August 1942, Lt. Comdr. D. H. Swinson in command.

Following her commissioning, Ancon underwent a month's work at Boston being converted for naval service. On 12 September, she got underway for the Virginia capes and, upon her arrival at Norfolk, took on cargo and troops for transportation to Baltimore Md. The ship reached that port on 6 October and disembarked her passengers. She then conducted trials and exercises in the Chesapeake Bay. After pausing again at Norfolk to take on more troops and equipment, the ship left the east coast on 24 October, bound for North Africa as a member of Transport Division 9, Amphibious Force, Atlantic Fleet. 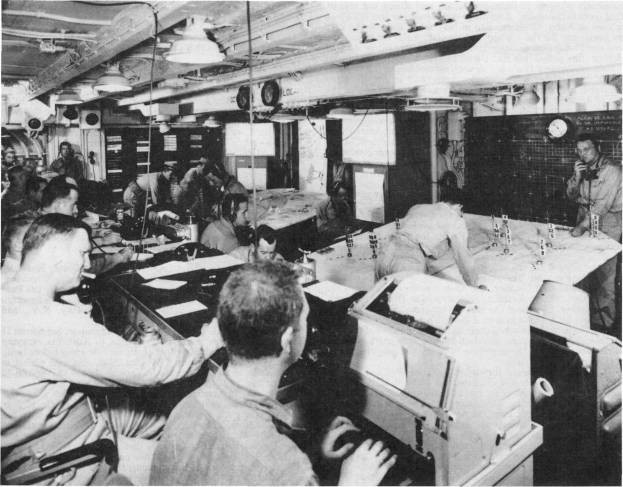 Caption: Inside Ancon's joint operations room, with situation boards, communications and command stations manned, 3 July 1943, shortly before the invasion of Sicily. Chalked sign on the bulkhead reads: "AGAIN WE HAVE BEEN ASKED TO DO THE IMPOSSIBLE. LET'S DO IT AS USUAL." (80-G-215083)

Ancon anchored off Fedhala, French Morocco, on 8 November and began lowering her boats at 0533. The first troops were debarked an hour later. During the course of the assault, men on the ship witnessed the sinking of four other transports, and Ancon sent out boats to rescue their survivors. On 12 November, the transport headed out and, three days later, put into Casablanca harbor. She got underway on the 15th with a convoy bound for Norfolk.

After a brief pause there, Ancon traveled to Brooklyn, N.Y., for voyage repairs. A brief period of sea trials preceded the ship's loading cargo and troops for transportation to Algeria. She sailed on 14 January 1943 as a member of the Naval Transport Service. The ship reached Oran on the 26th and spent five days discharging her cargo before heading back toward New York City, where she arrived on 13 February. On that day, the vessel was reassigned to the Atlantic Fleet Amphibious Forces. On the 16th, Ancon entered the Norfolk Navy Yard, Portsmouth, Va., to undergo conversion to a combined headquarters and communications command ship. She was redesignated AGC-4 on 26 February.

Following the completion of the yard work on 21 April, Ancon held trials and exercises in the Chesapeake Bay through May and into early June when she was designated the flagship of the Commander of the Atlantic Fleet Amphibious Forces. The ship got underway for Oran on 8 June with Task Force (TF) 85. The ship had been selected to participate in the invasion of Sicily, and her preparations continued after her arrival at Oran on 22 June.

Carrying Rear Admiral Alan G. Kirk, Commander, TF 85, and Lieutenant General Omar Bradley on board, Ancon sailed on 5 July for the waters off Sicily. She reached the transport area off Scoglitti, Sicily, on the 10th and lowered her boats early that morning. Despite enemy fire, the ship remained off Scoglitti providing communications services through the 12th and then got underway to return to North Africa. At the end of a fortnight there, she shifted to Mostaganem, Algeria, on 29 July. In mid-August, the vessel moved to Algiers, Algeria. During her periods in port, she prepared for the upcoming invasion of mainland Italy for which she had been designated flagship for the Commander of the 8th Fleet Amphibious Forces in Northwest African Waters.

On 6 September, Ancon got underway for Salerno. During the operation, the ship carried Lieutenant General Mark Clark who commanded the 5th Army. At 0330 on 9 September, the first wave of Allied troops hit the beach. Thereafter, she remained in the transport area, undergoing nearly continuous enemy air harassment, until she moved to Palermo, Sicily, to pick up ammunition to replenish her sister ships. She returned to the area off Salerno on the 15th but, the next day, arrived back in Palermo.

After two weeks in that Sicilian port, Ancon shaped a course for Algiers. She reached that port on 2 October and spent almost six weeks undergoing repairs and replenishment. In mid-November, she set sail for the United Kingdom and, on 25 November, arrived in Devonport, England, where she was designated the flagship of the llth Amphibious Force. An extended period of repairs and preparations for the impending invasion of France kept Ancon occupied through the winter and much of the spring participating in numerous training exercises with other Allied warships. On 25 May, King George VI of the United Kingdom visited the ship.

The preparations culminated on 5 June, when Ancon got underway for Baie de la Seine, France. She served as flagship for the assault forces that landed on Omaha Beach in Normandy. Throughout the invasion, the ship provided instructions for forces both afloat and ashore. She transferred various units of the Army command to headquarters ashore and made her small boats available to other ships to carry personnel and materials to the beachhead. On 27 June, she got underway to return to England and, the next day, arrived at Portland.

Ancon remained in British waters through late September, when she sailed in a convoy bound for the east coast of the United States. She reached Charleston, S.C., on 9 October and was then assigned to the Amphibious Training Command. At the completion of repairs at the Charleston Navy Yard on 21 December, the ship got underway for sea trials. Five days later, she shaped a course for the Pacific. On the last day of 1944, the ship transited the Panama Canal and joined the Pacific Fleet. She continued on to San Diego, Calif., where she arrived on 9 January 1945.

Upon reaching San Diego, Ancon entered Amphibious Group 5. She then proceeded to Pearl Harbor and, during the first two weeks of February, carried out training exercises in Hawaiian waters. On the 15th, she set out for Eniwetok where she paused to refuel before pushing on to Saipan. She reached there late in February and began holding rehearsals off that island and Tinian for the upcoming assault on Okinawa. The ship sailed for the Ryukyus with Transport Squadron 15 on 27 March.

Ancon arrived with TG 51.2 off the southeast coast of Okinawa on 1 April. Due to heavy enemy air activity, the ship stood out to sea on the 3d and set out for Saipan on the llth. She disembarked marines at Saipan on the 15th. After replenishment, Ancon left Saipan to return to Okinawa. For three weeks, she was anchored off the western beaches of Okinawa and supported forces ashore. During this time, the ship was almost continuously at general quarters due to Japanese air raids.

Ancon left Okinawa on 3 June and proceeded to Subic Bay and Manila, Philippines. There, she served as flagship of Commander, 7th Amphibious Force. For the next two months, the ship was involved in preparations for invasion of the Japanese home islands. However, this operation never materialized because Japan capitulated on 15 August. Shortly thereafter, Ancon got underway for Tokyo Bay with an intermediate stop at Iwo Jima. On 22 August, the ship rendezvoused with units of the 3d Fleet and sailed on toward Japan.

On the morning of the 29th, Ancon sailed into Tokyo Bay and assumed duties as a press release ship in coordination with battleship Iowa (BB-61). From the ship's anchorage between Missouri (BB-63) and South Dakota (BB-57), her crew witnessed the official Japanese surrender on 2 September. Ancon left Japanese waters on 20 September and set a course for Guam. She briefly stopped at Apra Harbor on the 27th, pushing on that same day for Saipan. There, the ship embarked occupation troops and supplies before reversing her course on 29 September and heading back to Japan.

On 2 October, Ancon was assigned to the 5th Fleet as the headquarters ship for a strategic bombing survey. She touched at Yokohama, Japan, on 3 October and remained in that area through November. Then, her survey duties being completed, the ship got underway on 1 December to return to the United States.

Ancon reached San Francisco Bay on 14 December. She remained at San Francisco in availability until 4 January 1946 when she sailed for the east coast. The vessel retransited the Panama Canal on 14 January and rejoined the Atlantic Fleet. She continued on to the New York Naval Shipyard, where she arrived on the 23d and began deactivation preparations. Ancon was decommissioned on 25 February 1946 and was returned to her owner. Her name was struck from the Navy list on 17 April 1946.