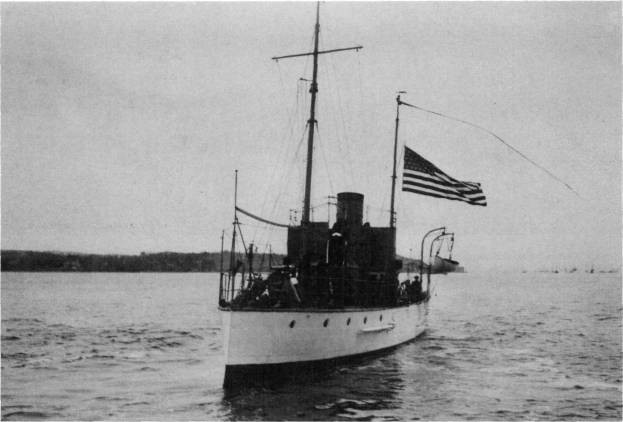 Caption: Alvarado, underway circa 1900; the men on her deck give the reader an idea of the small size of this vessel. Note, too, the size of the national ensign and the commission pennant relative to the size of the ship. (NH 83960)

Pedro de Alvarado, who lived from 1495 to 1541, served as second in command to Hernan Cortez during the Spanish conquest of the Aztec empire in Mexico. Later, he led an equally successful expedition to what is now Guatemala and Honduras. Following that conquest, he served as Spanish governor of the new territory.

The schooner Alvarado was purchased on 13 August 1861 at Baltimore along with other ships to be filled with stones and then to be sunk in various navigable fairways in the South. Whether or not she was finally so employed is unknown.

Alvarado, a gunboat built in 1895 at Clydebank, Scotland, by the Clydebank Engine & Shipbuilding Co. for the Spanish Navy, was captured by the United States Navy at the fall of Santiago de Cuba on 17 July 1898 and was commissioned on 4 August 1898, Lt. Victor Blue in command.

During the waning days of the Spanish-American War, she patrolled waters around Cuba. On 12 August, the gunboat participated in the bombardment and capture of Manzanillo located on the southeastern coast of the island. Following the end of hostilities, Alvarado continued to cruise between ports of Cuba until November. She began her voyage north on the 6th of November and, after a number of stops along the east coast of the United States, arrived at Washington, D.C., on 3 January 1899. She remained at Washington exactly three months before getting underway again on 3 April. The warship operated along the middle Atlantic coast for about a month before arriving at Portsmouth, N.H., on 5 May. Five days later, she was decommissioned and berthed in the navy yard there.

On 20 September 1900, Alvarado was placed back in commission, probably assigned to training duty at the Naval Academy at Annapolis, Md. There is some information to suggest that, about this time, she also cruised the Atlantic coast making port visits for recruiting purposes. In any event, she served as a training platform at Annapolis until 1906. On 22 March 1906, she was decommissioned once more, this time at the Norfolk Navy Yard. On 16 November of that year, she was turned over to the Louisiana Naval Militia for which she served as a training vessel until 1912. She was returned to Navy custody on 21 May 1912, and her name was struck from the Navy list simultaneously. On 10 June 1912, she was sold at New Orleans, La.