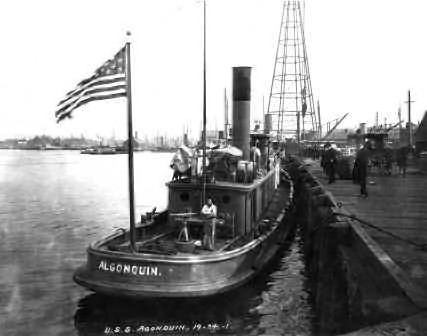 Caption: Algonquin pierside at the New York Navy Yard, Brooklyn, N.Y. circa April 1898. Note the 6-millimeter Colt machine gun mounted aft, the 13-star boat flag, and how the name is painted in white, with punctuation. Also note interested citizenry on the pier, along with a horse-drawn cart. Close investigation of the original print discloses how the figurehead of a bull (reflecting the tug’s original name, El Toro) is mounted above the pilot house. (U.S. Navy Bureau of Ships Photograph 19-N-14971, National Archives and Records Administration, Still Pictures Branch, College Park, Md.)

A native American tribe that inhabited the Ottawa River valley.

El Toro, an iron-hulled tug completed in 1891 at Newport News, Va., by the Newport News Shipbuilding & Dry Dock Co., was acquired by the U.S. Navy on 26 March 1898 from the Southern Pacific Railroad Co., renamed Algonquin; and commissioned on 2 April 1898, Ens. Walter S. Crosley in command.

After being outfitted at the New York Navy Yard, Algonquin reported for duty with the North Atlantic Squadron at its base at Key West, Fla., on 13 April. On 15 June 1898, she was renamed Accomac. The vessel served at Key West through the end of the year. In January 1899, she was reassigned to the forces supporting the occupation of Cuba and operated from Havana.

Between late 1900 and December of 1911 Accomac successively served as a yard tug at Port Royal, S.C.; Key West, Fla.; and Pensacola, Fla. On 4 December 1911, she arrived at the Boston (Mass.) Navy Yard where she spent the remainder of her active career.  She was renamed Nottoway on 1 August 1918 in General Order No. 408, and on 17 July 1920, when the Navy adopted the alphanumeric system of hull designations, she was classified as a district tug, YT 18.