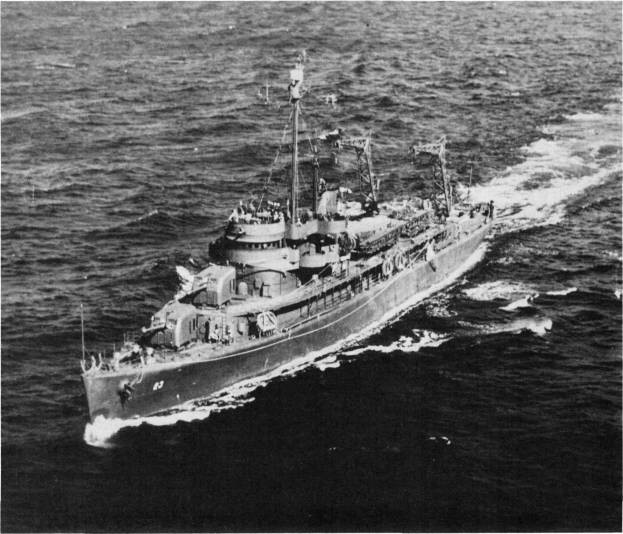 Caption: Absecon (AVP-23) was unique among the Barnegat class in that she mounted a single catapult to port, abaft the stack, and two aircraft handling cranes, of the type fitted to Cleveland-class light cruisers, at the after end of the main deck superstructure, to enable her to train catapult floatplane pilots. She is seen here off Fort Lauderdale, Fla., 6 January 1944, in a photo taken by Photographer's Mate 2d Class J. Chefetz, USN. (80-G-388244)

Absecon (AVP-23) was laid down on 23 July 1941 at Houghton, Wash., by the Lake Washington Shipyard; launched on 8 March 1942; sponsored by Mrs. Robert L. Moon, Jr., the daughter of Capt. Guy E. Davis, who was then the chief of staff to the Commandant of the Thirteenth Naval District and the wife of Cmdr. Robert L. Moon, Jr.; and commissioned at the Puget Sound Navy Yard, Bremerton, Wash., on 28 January 1943, Cmdr. Robert S. Purvis, Jr., in command.

Absecon was unique among her Barnegat-class  sisters in that she was the only one to be fitted with a catapult and cranes. Her redesign from the standard configuration resulted from the Navy's need for pilots to qualify for catapult operations in the battleship and cruiser-based aviation units. The snip was converted prior to her commissioning, progress well underway by June of 1942. Absecon, assigned the duty of providing training for catapulting and sled net recovery while underway, completed her fitting out period on 14 February 1943 and commenced her shakedown the following day, her embarked aviation unit consisting of one Curtiss SO3C-1 Seamew and a pair of Vought OS2U-3 Kingfishers.

Upon the completion of her shakedown, Absecon departed San Pedro, Calif., on the afternoon of 28 February 1943 and transited the Panama Canal between 7 and 9 March. She conducted daily reconnaissance and antisubmarine flights with her embarked aircraft as she proceeded toward Jacksonville, Fla. At 1335 on 11 March, she exchanged identification with a friendly patrol bomber which informed her of having sighted a ship sinking in the vicinity. Absecon altered course accordingly and proceeded to the scene where, at 1518, she picked up seven survivors from the Honduran-flag United Fruit Co. freighter Olancho. Earlier that morning, the ship had been proceeding from Honduras to Tampa, Fla., when she was torpedoed. Postwar accounting revealed her assailant to be U-183. (Kapitanleutnant Heinrich Schafer commanding).

Absecon reached Jacksonville on the 13th and soon disembarked the seven men from Olancho. Over the ensuing months, from March to September of 1943, the seaplane tender operated out of the Naval Section Base, Mayport, Fla., coordinating observation plane (VOS) pilot training with Operational Training Unit (OTU) No. 1 out of the Naval Air Station (NAS), Jacksonville, qualifying pilots and serving as a target for torpedo runs. Such operations were not without hazard; for, on 16 April 1943, Absecon struck a submerged wreck off Mayport that caused considerable damage to her hull. Following repairs, she resumed her steady pace of training evolutions that lasted into the autumn.

In September 1943, Absecon was shifted to operate from the Naval Section Base at Port Everglades, Fla., as well as from the Coast Guard base at that port. She then carried out her training activities into the winter. One event highlighted her service during this period. She got underway at 0810 on 13 November 1943 for operations as a target ship for torpedo bombers based at NAS Fort Lauderdale. At 0930, Absecon observed a small craft flying distress signals and, upon closing the range, identified her as Franklin Baker, owned by the Eveready Shipping Co. of New York and bound from Baracoa, Cuba, to Miami, Fla., with a cargo of bananas. Seeing Franklin Baker to be "in sinking condition," Absecon passed a towline to the former, which had been adrift, her engines broken down, since noon the day before. However, the towline parted so the seaplane tender took the merchantman alongside; took off the master, Samuel P. Henning, and his crew of six; and rigged two submersible pumps on board the craft before rerigging a towline and getting underway once more at 1033.

Less than an hour later, however, at 1124, it was evident that Franklin Baker could not be saved, so Absecon cut the banana boat adrift. Two depth charges exploded off Franklin Baker's bow had "no effect, her superstructure still remaining awash; 18 5-inch projectiles likewise failed to yield the desired results- the little banana boat remaining defiantly afloat. Directing the Coast Guard patrol boat, USCGC 60026, to sink the derelict with demolition charges lest Franklin Baker become a menace to navigation, Absecon continued her operations with the Grumman TBF Avengers operating out of Fort Lauderdale before returning to the Section Base dock at Port Everglades later that afternoon.

During 1944, Absecon maintained a relentless pace off Port Everglades, conducting daily flight operations. She conducted 1,394 catapult launchings and a corresponding number of recoveries and qualified 211 pilots-thus averaging approximately 116 launches per month with 18 pilots a month qualifying for the operation of cruiser and battleship-based floatplanes such as the SO3C, the OS2U, the Curtiss SOCSeagull and the Curtiss SC Seahawk. Her peak month of operations was November 1944, when she conducted 279 launchings and qualified 58 aviators. In addition to this duty, she also served as a mobile target for torpedo planes operating out of NAS Fort Lauderdale, and NAS Miami.

Neither operation was hazard free: on 7 April 1944 one of the ship's OS2U-3's overran the sled being towed alongside, fouling the breast line and tearing away a wingtip float. The plane capsized and, after "complete salt water immersion," was salvaged. Fortunately, there were no casualties. In addition, shallow-running exercise torpedoes struck the ship four times during 1944: the first time on 30 January, the second on 24 June, the third on 19 August, and the last on 31 October 1944. The first flooded two compartments; the third hit caused flooding, controlled by fire and bilge pumps, in the forward engine room, the last caused a small rupture in the shell plating.

Not only did aircraft capsizings and torpedo hits make life interesting for Absecon's sailors, but that fall a tropical storm added zest. With the evacuation of Port Everglades of shipping in the path of a storm headed in its direction, Absecon departed on 17 October 1944, sending one of her planes to NAS Banana River, Fla., prior to departure. Mooring at the Naval Frontier Base, Mayport, Fla., on the 18th, she dispatched the remaining two OS2U-3's to NAS Jacksonville, soon after her arrival and then rode out the hurricane that lashed the vicinity with winds that reached 100 knots. By the 20th, the storm had passed, permitting Absecon to resume her training evolutions.

The year 1945 promised more of the same sort of duty for the unique Barnegat-class ship, including some of the same types of operational accidents, some more serious than others. On 19 February 1945, for example, an exercise torpedo hit the ship aft on the starboard side, below the waterline, and then hit the starboard propeller, damaging two blades. This necessitated a visit to the Charleston (S.C.) Navy Yard, where she arrived at 1258 on the 23rd. Absecon soon entered dry dock where her damaged screw was replaced. Underway for her home port on 3 May, the ship arrived back at Port Everglades the next day and resumed her active operations schedule.

On five occasions during 1945, aircraft capsized during recovery operations, all except the last, on 4 August 1945, resulting in the salvage of the aircraft involved. On that occasion, the plane, apparently damaged beyond repair, was shelled and sunk. As she had done with Franklin Baker, Absecon again lent a helping hand to mariners in distress; on 6 February 1945, she assisted the fishing boat Chip by taking her in tow and turning her over to the Coast Guard for further assistance.

Absecon based at Port Everglades until mid-July 1945 when she shifted to NAS Pensacola, Fla., for duty involving training and logistical support of the VO/VCS (observation/cruiser-based observation aircraft) operations there. Absecon carried out this training through V-J Day (15 August 1945) and into September of 1945. During those nine months, she conducted 1,839 catapult launchings, an average of 204 per month, and qualified 274 pilots. Her peak "production" of pilots occurred in March 1945 when she qualified 45, and her peak number of launchings occurred during August when she conducted 340.

As the helicopter began to supplant cruiser and battleship based seaplanes, the need for qualifying pilots of the latter diminished accordingly. After a period as a training ship out of NAS, Pensacola, Absecon was placed out of commission, in reserve, on 19 March 1947, and laid up with the Texas Group of the Atlantic Reserve Fleet, Orange, Tex.

Transferred to the United States Coast Guard on 5 January 1949, Absecon became USCGC Absecon (WAVP-374) and operated as such through the 1960s. Operating primarily in the Atlantic out of Norfolk, Va., the erstwhile seaplane tender served as a weather ship on ocean stations, before the advent of improved storm-tracking radars obviated such operations. During the 1950s, she frequently visited Argentia, Newfoundland, and St. George Harbor, Bermuda, between stints on patrol on the high seas in the north and central Atlantic and periods of regular upkeep at Norfolk.

On 21 September 1957, Absecon, on her ocean station in the central Atlantic, picked up a distress call from the West German four-masted steel bark Pamir. The square-rigger, homeward bound from Argentina with a cargo of barley and with 86 men (52 teenaged cadets among them) on board, had run into Hurricane Carrie and been battered severely by the vicious storm, ultimately sinking in the tempest. Absecon altered course immediately and stood toward Pamir's last position. Arriving on the scene the following day, the Coast Guard cutter immediately began sweeping the stormy sea for signs of life, aided by Portuguese and U.S. Air Force planes from the Azores and Navy planes from Bermuda. About 50 ships, representing 13 nations, searched for one week. Ultimately, Saxon rescued five men,three days after Pamir had sunk; Absecon found the square-rigger's last survivor, 22-year old Gunter Hasselbach, the following day. Seventy-two men had perished.

Subsequently classed as a high endurance cutter, WHEC-374 on 1 May 1966, Absecon was decommissioned by the Coast Guard on 9 May 1972 and returned to the U.S. Navy. Stricken from the Naval Vessel Register on 15 June 1972, the ship was transferred to the South Vietnamese Navy, and was renamed Pham Ngu Lao (HQ.15). Unable to escape from South Vietnamese waters when that country fell to communist domination in the spring of 1975, she was redesignated Pham Ngu Lao (HQ.01) in May 1975. Refitted with Soviet weaponry, the ship served in the North Vietnamese Navy through the end of the 1990s..