By Naval History and Heritage Command

"Today we grieve alongside the family and friends of Adm. Carlisle A. H. Trost," said Chief of Naval Operations Adm. Mike Gilday. "He was a warrior, a man of honor and a committed patriot who guided the Navy through difficult times, including conflict in the Middle East and Panama.  Adm. Trost also led the Navy's transition from a focus on the Cold War to regional and littoral conflicts around the world. His goal above all else was to be a good husband, a good father, a good friend and a good naval officer. No doubt, Adm. Trost was all those things. We have truly lost a great leader and shipmate. Fair winds and following seas, sir. We are stronger for your leadership and grateful for your steadfast commitment to our Navy and nation."

Relieving Adm. James D. Watkins as the Navy’s top military leader in 1986, Trost facilitated the transition of the U.S. Navy from a Cold War focus on sea control to a new emphasis on regional littoral conflicts.

Among his goals as CNO was to maintain the Navy’s global maritime superiority, not only from larger threats, such as the Soviet Union and China, but also from smaller nations, drug traffickers, and terrorists. To achieve that mission would require the U.S. Navy to maintain its advantage in antisubmarine warfare, using forward flexible forces that only the Navy could provide. 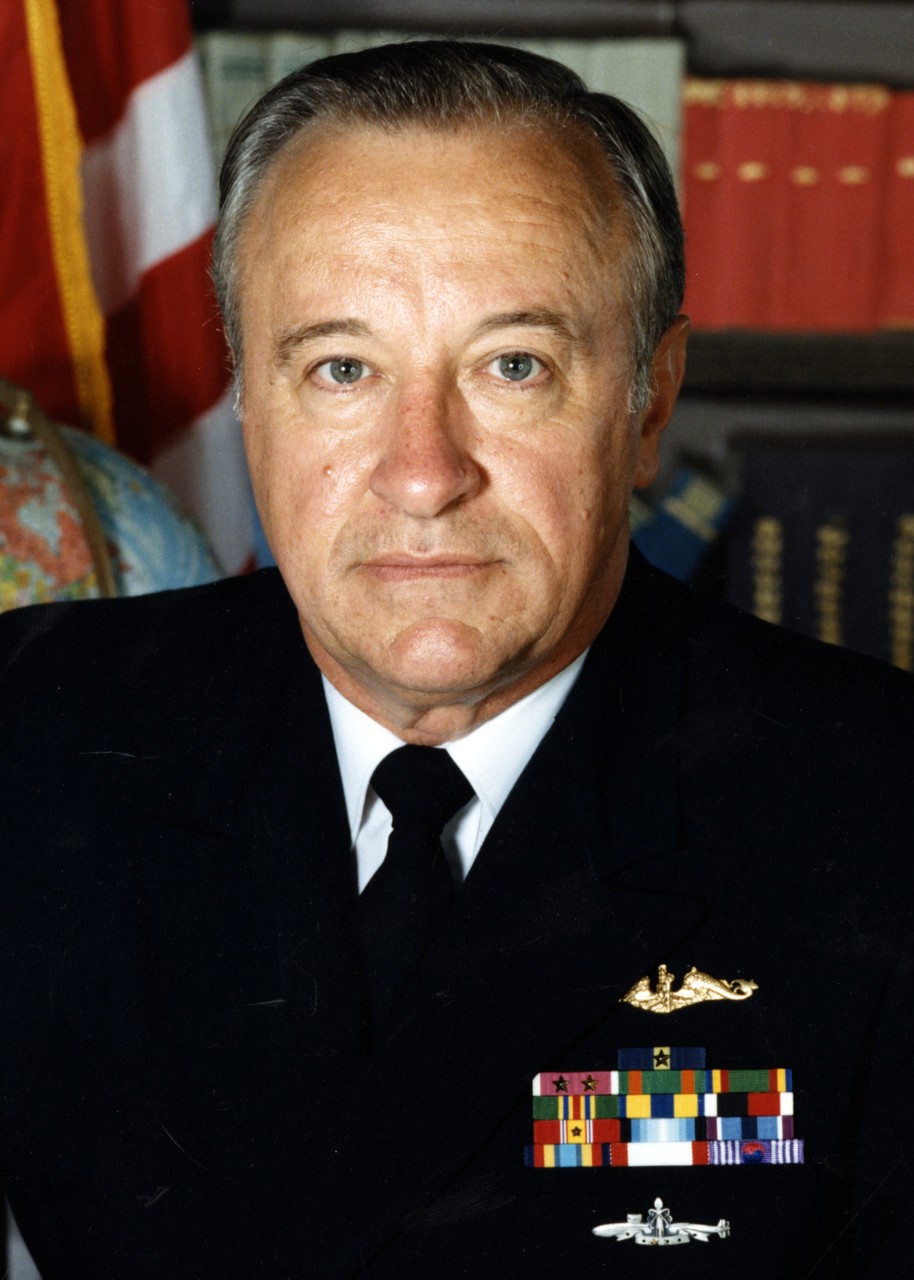 “Admiral Trost was the epitome of a hard-charging Navy Officer, yet was always a true gentleman and people person. I had the privilege to be one of his Intelligence briefers in 1986-1987 during the high-water mark of Soviet Navy operations during the Cold War. I marveled at his ability to instantly grasp the long-range strategic and operational implications of any intelligence report on anything in the world.” said retired Rear Adm. Sam Cox, Director, Naval History and Heritage Command.

During his tenure as CNO, Trost confronted growing tensions in the Middle East, complicated by the Iran-Iraq War. Less than one year into his tour, on May 17, 1987, USS Stark was hit by two missiles fired by an Iraqi aircraft that killed 37. Starting in 1987 and for more than a year, the Navy supported Operation Earnest Will, escorting Kuwaiti-owned tankers to ensure their safe passage in the Gulf.

Early into Admiral Trost’s term as CNO, President Ronald Reagan was urging “Mr. Gorbachev, tear down this wall.” By the end of Admiral Trost’s term, the Berlin Wall was down. As the Soviet Union crumbled, however, Admiral Trost never wavered from his belief that the Navy needed to remain vigilant with its forward presence. He warned of “governments of fanatics” whose national policy was to destroy democracy.

Admiral Trost made joint international exercises with allies a part of the Navy’s operational and training missions. He invited CNOs from other countries and also visited them to assess their viability as allies and partners. In October 1989, Admiral Trost made a historic visit to the Soviet Union where he met with his Soviet counterpart and fellow submariner, Fleet Admiral Vladimir Chernavin. His trip’s purpose was to enhance mutual understanding and reduce tensions between the two countries.

When Trost’s tenure as CNO ended in 1990, he had served under two presidents: Ronald Reagan and George H. W. Bush. Through his guidance and perseverance in keeping the Navy and Sailors at operational readiness, the United States was prepared to lead a multinational force in the first Persian Gulf War in 1991, months after his departure from office. 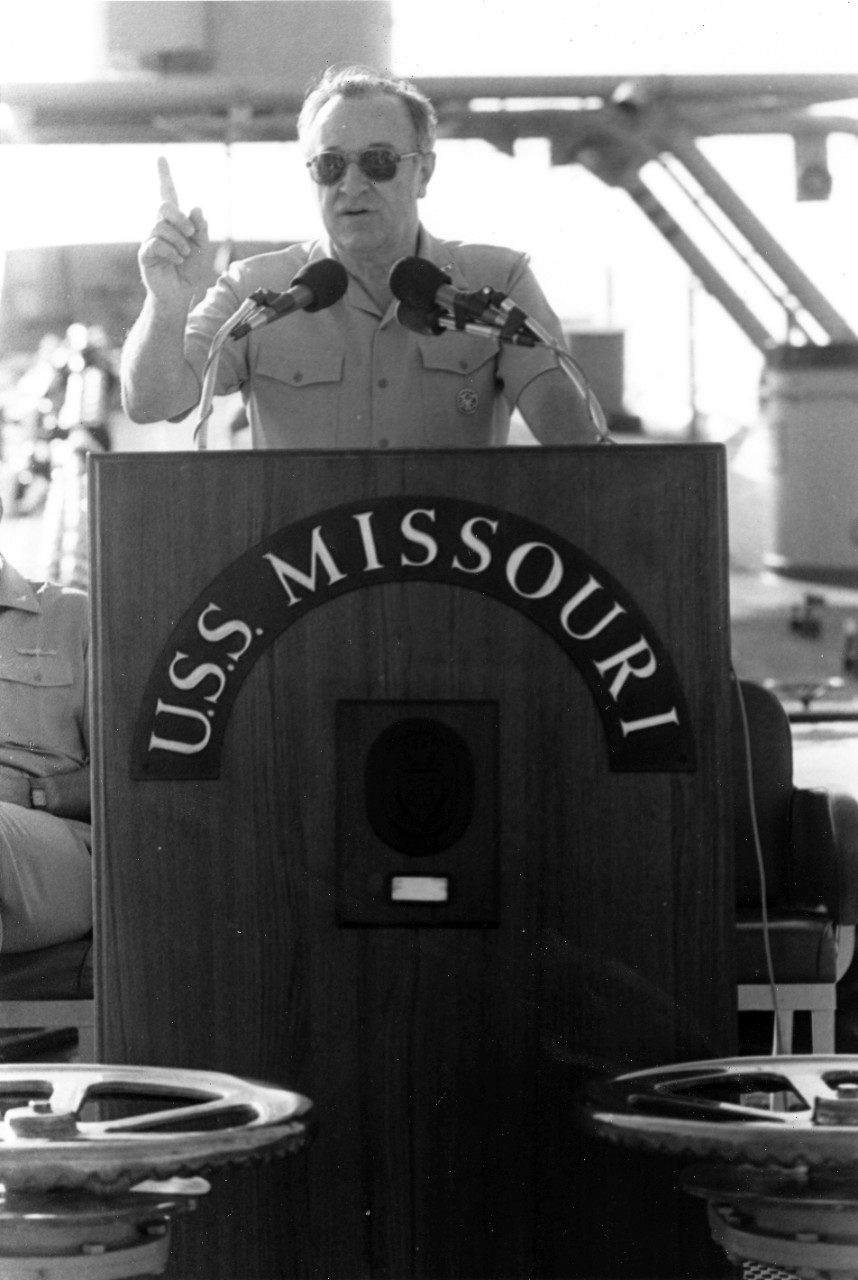 Born in Valmeyer, Ill. in 1930, Trost attended the U.S. Naval Academy. After graduating first in his class in 1953, he joined the crew of a destroyer and then attended submarine school and was trained in nuclear power, graduating number one in that class as well. In 1956 he was stationed on USS Sirago.

As a junior officer he was awarded an Olmstead Scholarship to study at the University of Freiburg, Germany. During the 1970s Admiral Trost completed assignments as the naval aide to the Secretary of the Navy; Assistant Chief of Naval Personnel; and Director, Navy Program Planning.

Naval History and Heritage Command, located at the Washington Navy Yard, is responsible for the preservation, analysis, and dissemination of U.S. naval history and heritage. It provides the knowledge foundation for the Navy by maintaining historically relevant resources and products that reflect the Navy's unique and enduring contributions through our nation's history, and supports the fleet by assisting with and delivering professional research, analysis, and interpretive services. NHHC is composed of many activities including the Navy Department Library, the Navy Operational Archives, the Navy art and artifact collections, underwater archeology, Navy histories, ten museums, USS Constitution repair facility and the historic ship Nautilus.