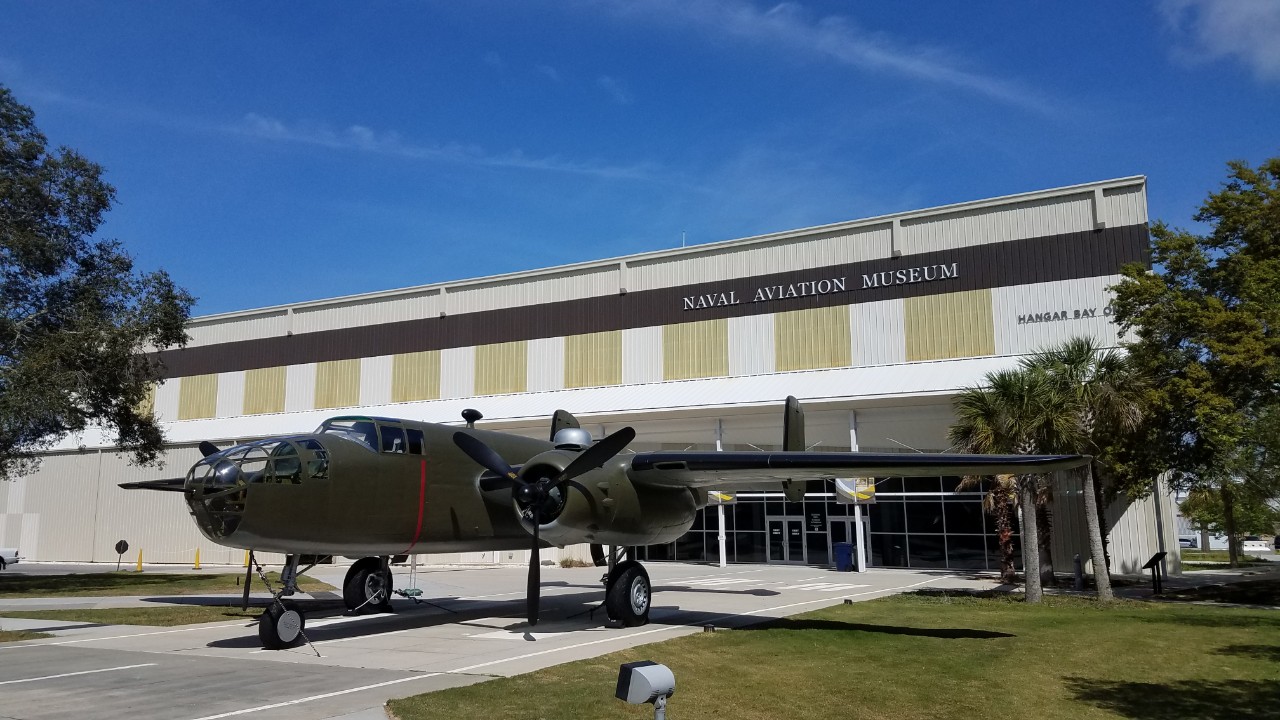 Caption: The B-25J Mitchell bomber now on display at the National Naval Aviation Museum in Pensacola, Florida, reflects the paint scheme of the aircraft flown by Lt.Col. James Doolittle during the bombing raid on Tokyo, Japan on April 18,1942.

Restored to reflect the paint scheme of the aircraft Lt. Col. James Doolittle flew during the raid, which launched from the deck of the aircraft carrier USS Hornet (CV 8) on April 18, 1942, the aircraft will be on display for public viewing between the museum’s Blue Angels’ Atrium and Hangar Bay One.

The Doolittle Raid marked the first time American forces attacked Japan’s homeland during World War II and provided a much-needed morale boost for the American people. The raid showcased the flexibility of carrier aviation and also marked a first for aviation history as the Army Air Forces aircraft were at the time the largest to ever launch from the deck of a Navy ship. 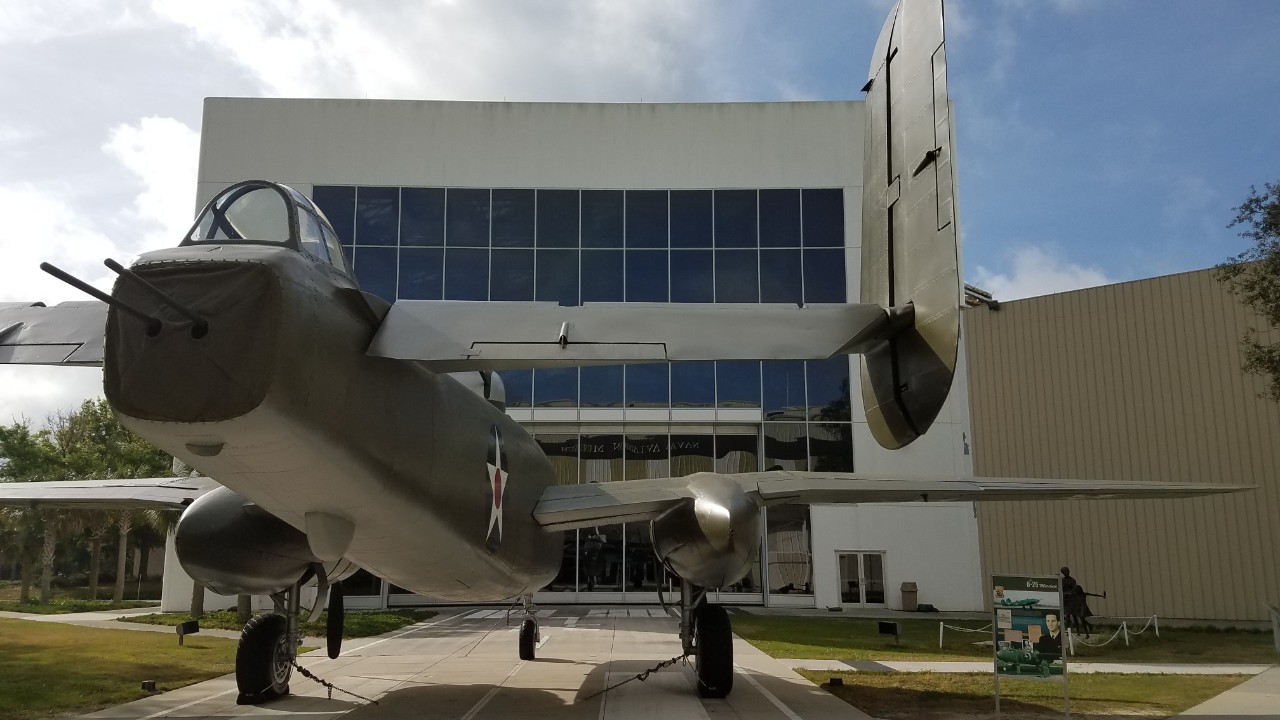 Led by the museum’s aircraft preservation and conservation head, Steve Granger, staff members with the assistance of over 30 museum volunteers, both military and civilian, spent over 4,500 man hours painstakingly restoring the aircraft from years of corrosion caused by weather conditions.  In the process they ensured that insignia, paint scheme and other markings accurately matched the original aircraft.

The National Naval Aviation Museum will also emphasize Pensacola’s local ties to the raid by highlighting Lt. Henry Miller, a flight instructor from Naval Air Station Pensacola who helped train the bomber pilots on short carrier deck take-off procedures. The museum maintains a large collection of artifacts, including papers, notes and documents from Miller’s time with the Doolittle aircrews. 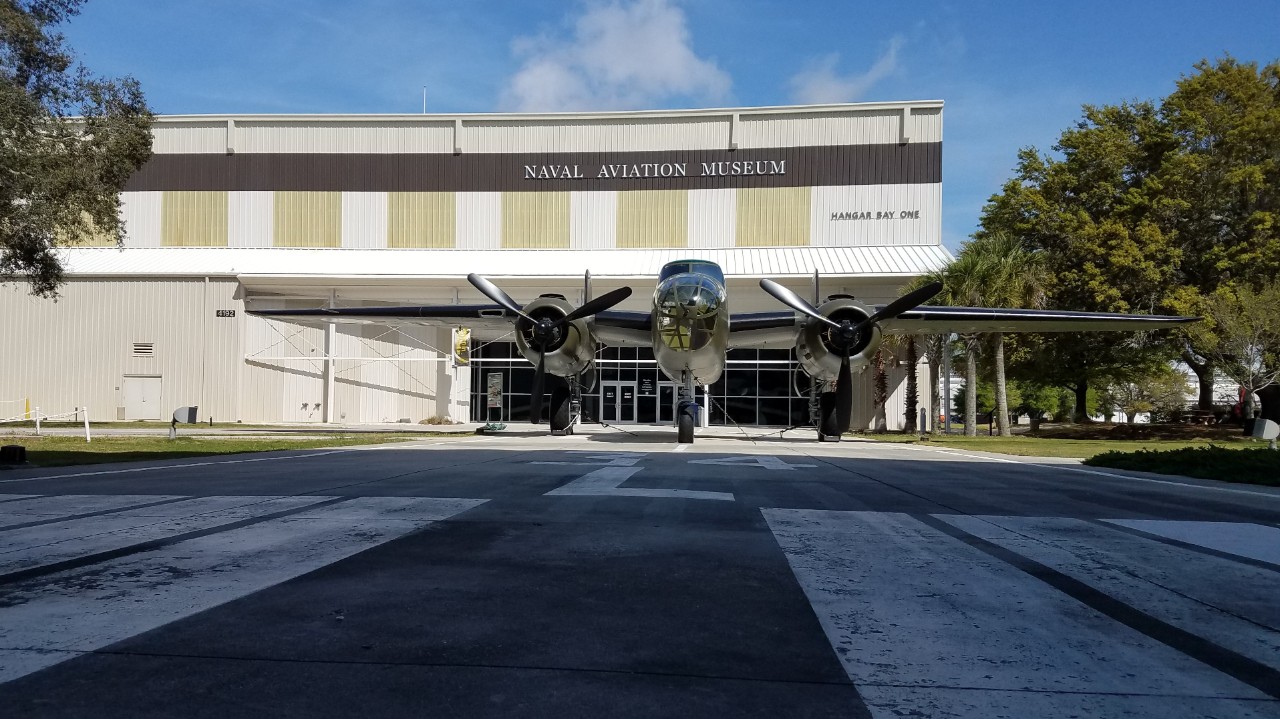 Caption: A frontal view of the B-25J Mitchell bomber commemorating the 75th anniversary of the Doolittle Raid is parked between the main building of the National Naval Aviation Museum and its annex, Hangar Bay One.

The National Naval Aviation Museum is open from 9:00 a.m. to 5:00 p.m. onboard Naval Air Station Pensacola, Florida.  For further information about the museum, please call 850-452-3604 or visit our website at www.navalaviationmuseum.org.