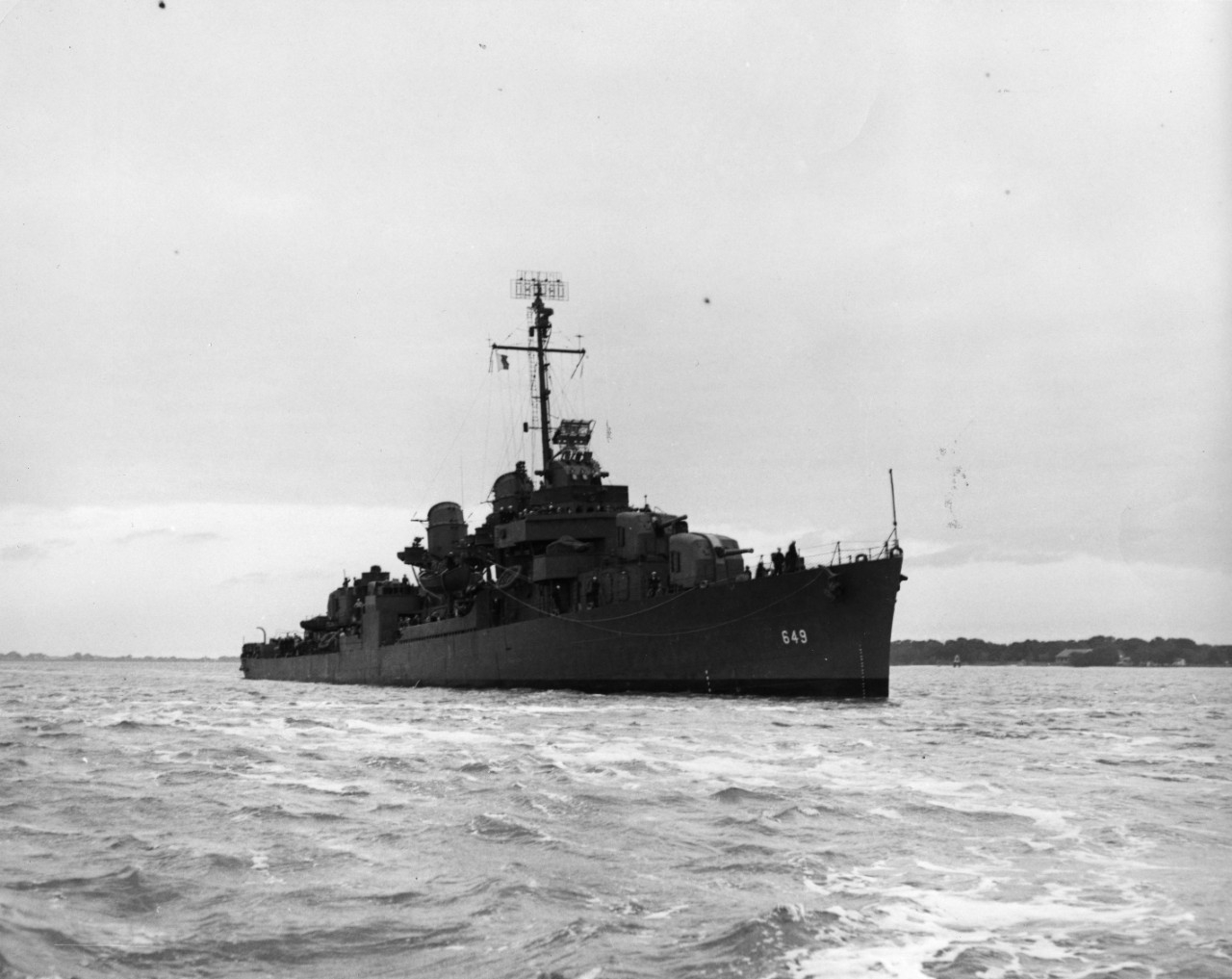 Albert Weston Grant, born on 14 April 1856 at East Benton, Maine, grew up at Stevens Point, Wis., with his pioneer family and won a competitive appointment to the Naval Academy from which he graduated on 20 June 1877. Following service in Pensacola, Lackawanna, Alliance, Passaic, and Iroquois, he served ashore at the Norfolk Navy Yard, received torpedo training, and served briefly at the Naval War College.

Duty in Trenton, Richmond, Saratoga, and Yorktown preceeded his return to Norfolk to supervise major repairs to Pensacola which entailed pioneer work in applying electricity to warships and then reported to Concord. On 9 May 1893, his commission as a lieutenant reached him while he was serving in that gunboat. A tour in cruiser San Francisco ended in the summer of 1894 when Grant was ordered back to the Naval Academy for duty as an instructor. Detached some three years later, he returned to sea in Helena and served off the coast of Cuba in Massachusetts during the Spanish-American War.

Transferred to Machias on 8 September 1898, Grant was serving in her when promoted to lieutenant commander on 1 July 1900, a month before orders sent him back to the Academy for two more years as an instructor. Three years of service in the Far East followed, as executive officer of Oregon and then as commanding officer of that battleship, before he returned to Annapolis where he was promoted to commander and placed in charge of the Seamanship Department. During this assignment, he prepared a study of naval tactics, The School of the Ship, which became a standard textbook.

On 22 July 1907, Grant reported to the Naval War College for instruction and, upon completing the course in the autumn, assumed command of Arethusa and took that fuel ship around Cape Horn to the Pacific. Detached on the last day of March 1908, he embarked in Connecticut as chief of staff to the Commander of the Atlantic Fleet. During that tour of duty, he was promoted to captain on 1 July 1909. He relinquished his post as chief of staff on 26 October 1909, but remained in Connecticut as her commanding officer.

In the summer of 1917, some three months after the United States entered World War I, Grant took over Battleship Force 1, Atlantic Fleet, with additional duty in command of Squadron 2 and Division 4. This position gave him the rank of vice admiral. December 1918 brought him command of the Atlantic Fleet. The following spring, he became commandant of the Washington Navy Yard and superintendent of the Naval Gun Factory.

That day, the destroyer departed Charleston for a shakedown cruise to Bermuda and returned to Charleston on 29 January 1944 for minor alterations. She headed for Norfolk, Va., on 8 February; and, five days later, she got underway to escort the new carrier Hornet (CV-12) to Hawaii. They transited the Panama Canal, joined more ships at San Diego, and finally arrived at Pearl Harbor on 4 March.

On 4 April, the destroyer sailed for Majuro where she joined Task Force (TF) 58 for the invasion at Hollandia. During that New Guinea operation, from 21 to 29 April, Albert W. Grant engaged in picket duty, inshore patrol duty, and covered landing force operations. On 29 April, she headed for the Caroline Islands with Task Group (TG) 58.3 and screened the carriers during strikes on Truk. The task group left for Majuro on 2 May and continued on to Pearl Harbor, arriving there on 11 May.

After a brief respite, Albert W. Grant got underway on 29 May or Eniwetok, which served as the staging area for the invasion of the Marianas. On 11 June, she sailed to Saipan and commenced her gunfire support activities on 15 June. The destroyer was also involved in action against Tinian. She departed the Saipan area on 29 July and put in to Eniwetok on 2 August. Following a brief upkeep period, the destroyer got underway for Purvis Bay, Solomon Islands, on 22 August.

The ship sortied with TG 32.5 on 6 September for the assault on the Palaus and, during a two-week period in mid-September, conducted preinvasion bombardment and supported the landings on Peleliu and Angaur. On 29 September, she left for Manus Island. The destroyer remained there through 12 October, then sailed for the Philippines as a member of TG 77.2. On 17 October, Albert. W. Grant provided protection for Crosby (APD-17) while that fast transport landed troops on Suluan Island, Philippines. From 17 to 24 October, the destroyer provided fire support for the assault on Leyte.

On 24 October, Albert W. Grant joined TG 77.2 and sailed to engage a Japanese task force reported steaming northward from the Sulu Sea toward Surigao Strait. That American battleship group met the Japanese force in the strait; and Albert W. Grant, along with other destroyers in advance of the main battle line conducted a torpedo attack. During this attack, she was hit and severely damaged by gunfire. Albert W. Grant suffered 22 hits, many by six-inch shells. Fires broke out, and the ship lost steering control and all power. Thirty-eight men were killed and 104 were wounded. Although their ship was down by the bow and listing heavily to port, the destroyer's crew got her engines working again and enabled her to retire to American-controlled waters in Leyte Gulf.

Albert W. Grant left the shipyard on 11 March 1945 and headed for Pearl Harbor. She arrived there on 25 March and began underway training exercises. On 23 April, the destroyer sailed for the Philippines. Albert W. Grant reached Leyte on 13 May. She stood out of Manila on 3 June to escort General Douglas MacArthur, embarked in Boise (CL-47), on a tour of the Philipines. Albert W. Grant then sailed southwest toward Brunei Bay, Borneo, to rendezvous with TG 78.1 for the assault on Brunei Bay. On 10 June, she covered the landings there. The ship rejoined the MacArthur tour on the 11th and dropped anchor at Manila on 15 June.

Albert W. Grant operated in Manila Bay until 27 June, when she got underway for Balikpapan, Borneo. From 30 June to 9 July, the destroyer covered operations against Balikpapan. She was back at Manila on 14 July. Albert W. Grant then moved to the Marshalls and, upon her arrival at Eniwetok on 3 August, joined TF 49 for duty in the North Pacific. She sailed to Adak, Alaska; and, the day before she arrived there, received word of the Japanese capitulation on 15 August, and sortied with TF 49 for Ominato, Japan. The task force arrived off Honshu on 8 September and anchored at Ominato on the 10th.

The destroyer remained on occupation duty in Japan through mid-November. Albert W. Grant then sailed back to the United States; arrived at Seattle, Wash., on 2 December; and, upon her arrival, began overhaul. The destroyer was placed out of commission, in reserve, at San Diego on 16 July 1945. Her name was struck from the Navy list on 14 April 1971, and she was sold for scrapping.