Survival machete retreived before the sinking of USS Princeton (CVL-23)

On the second day of the Battle of Leyte Gulf, the aircraft carrier USS Princeton (CVL-23) was struck by a single 551-lb bomb dropped by a lone Japanese dive bomber. The bomb penetrated the flight deck, exploding on the hangar deck and igniting a massive fire among the fueled and armed planes. Located several decks below and just forward of the site of the explosion, Water Tender 2nd Class, Sam Tarullo, was at his battle station in the after fire room. Within seconds of the explosion, the after fire room was engulfed in choking black smoke from the fires, carried in by the ventilation ducts. The intense heat from the raging fires and overpowering smoke forced the sailors in those spaces to evacuate. 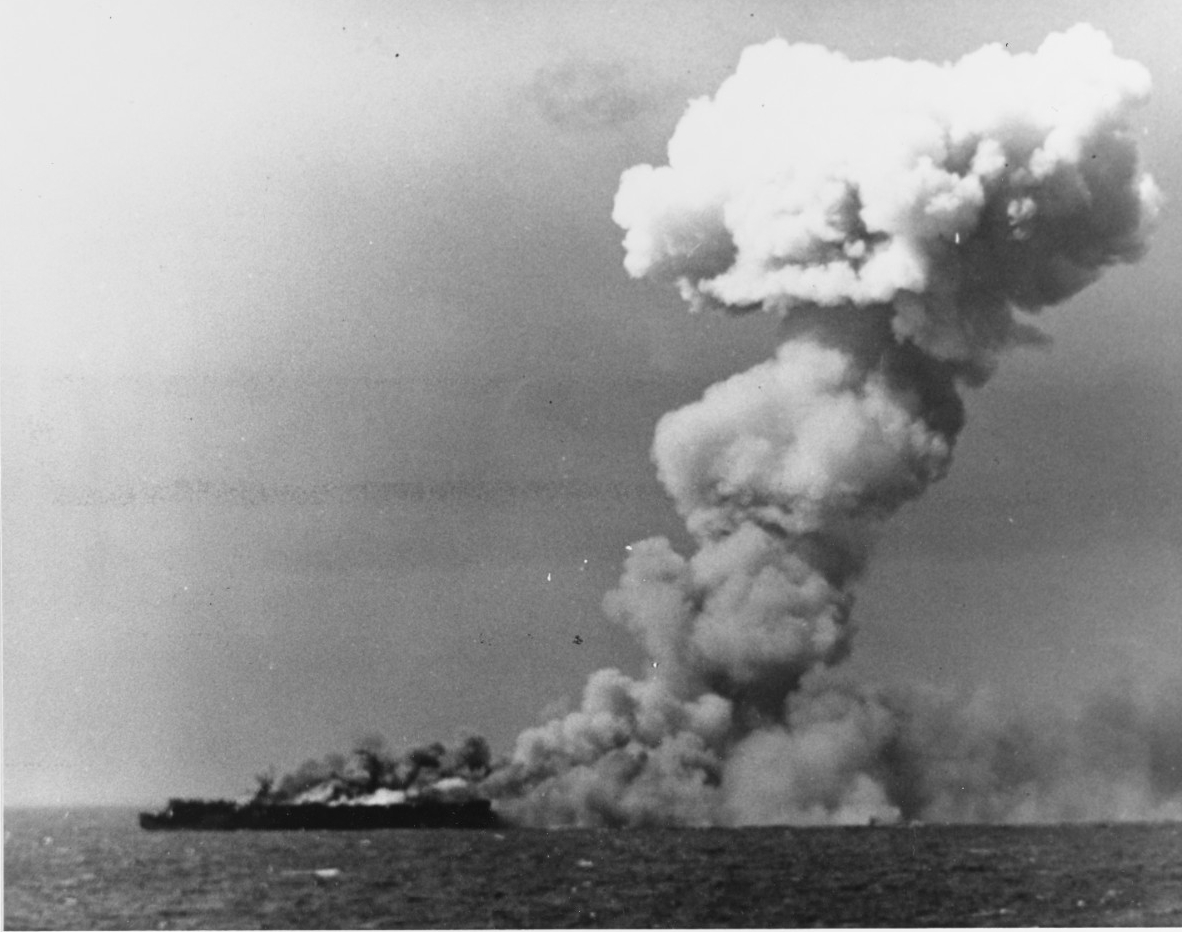 Description: Princeton burning soon after she was hit by a Japanese bomb while operating off the Philippines on 24 October 1944.

Over the course of several hours, with fires continuing to spread throughout the ship, the orders were given to abandon ship for all but essential fire and rescue personnel. As the afternoon wore on, the firefighting efforts from other ships in the task group and the men aboard the Princeton appeared to be working and the fires were coming under control.

As the fires began to come under control and it looked like the ship could be saved, Tarullo was among a group of volunteers from the USS Birmingham (CL-62) one of the ships rendering aid, who returned to the Princeton to assist in restoring power to the ship. After the war, he related to his neighbor that the officer in charge ordered him to look for wounded left behind and to fight fires. He was carrying the order out when the fires touched off a collection of bombs housed in torpedo stowage. The massive explosion blew off the stern of the Princeton and sprayed the Birmingham with deadly shrapnel. Tarullo said if he had not been ordered to search for wounded in another part of the ship, he would not have survived. He would later be awarded the Bronze Star with combat V device for his voluntary return to the burning ship to render assistance. 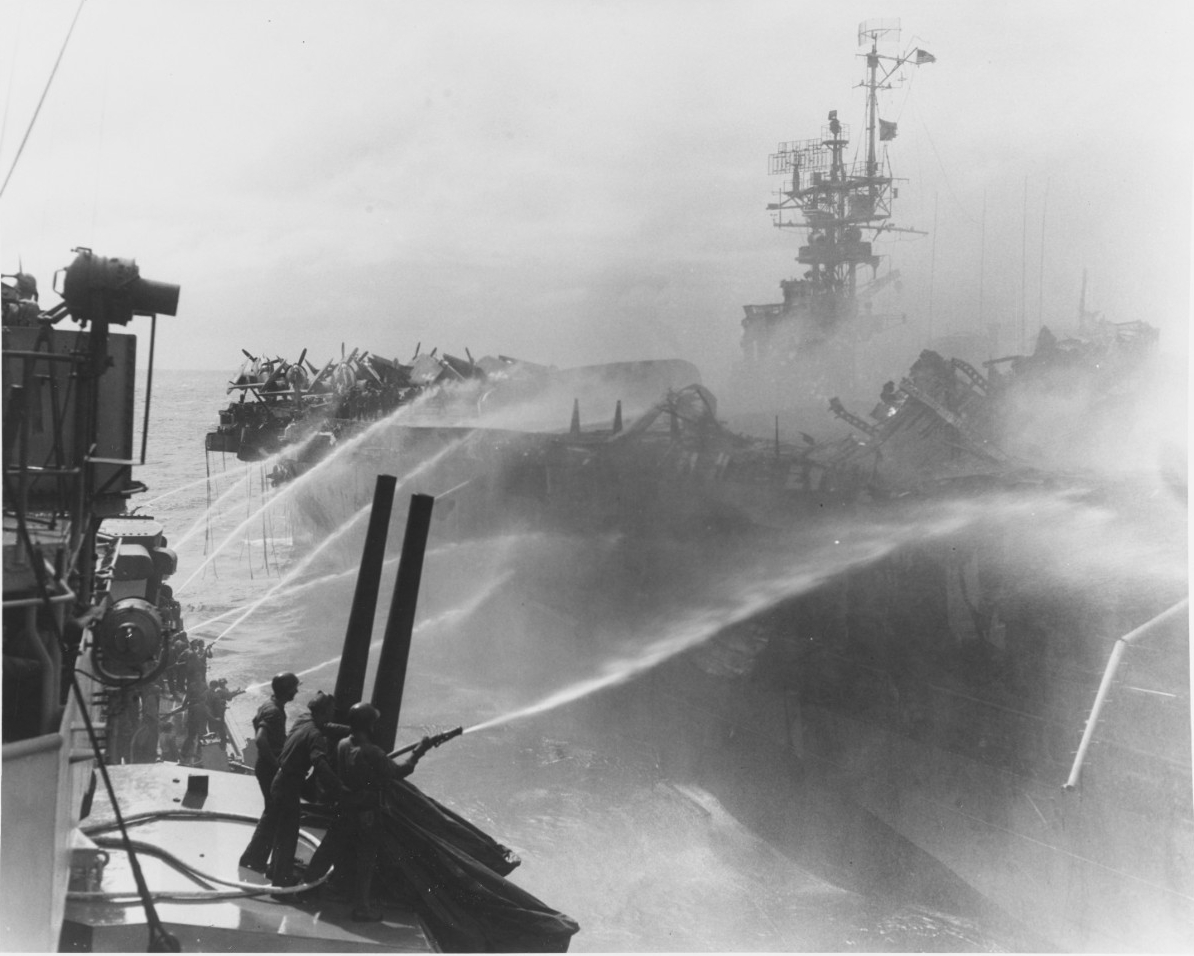 With the ship so badly damaged, the order was given to abandon ship and sink her. As Tarullo was preparing to leave the ship for the final time, he took with him a survival kit from one of the ship’s aircraft. This machete is all that remains of that survival kit.

This survival non-folding machete, equipped with a 10.25-inch blade could be found in the back pad kit attached to a pilot’s parachute harness. The machete was mounted on a wood plaque by Tarullo’s friend after it was gifted to him. The machete has a two-piece wood grip sandwiched on the tang. The grip is secured in place by four rivets. The hilt is slightly contoured on one side. The pommel has a rounded birds head shape. There is a hole drilled through the pommel. The obverse grip is inscribed "U.S.S. Princeton / Oct. 24 1944 / U.S. Navy." The blade is single-edged with a rounded, oblong tip, and a short ricasso. The obverse blade is inscribed just below the spine "CASE XX." The knife is mounted on a wood board with three hooks. A brass plaque below the knife is inscribed "THE LAST PIECE / OF THE U.S.S. PRINCETON / SUNK OCT. 24, 1944." The reverse of the plaque is inscribed R.V. Dobek 07/90 along one of the short sides.