World War II for the flying boats started sooner than many. PBY Catalinas and PBM Mariners, a newer flying boat built to complement the PBY, were sent to Iceland, Newfoundland, Bermuda, and other bases as part of the Neutrality Patrol where they searched for German U-Boats. In May of 1941, Lieutenant Leonard Smith was helping train RAF pilots in PBY operations when he took part in a mission that spotted the German battleship Bismarck, which led to its sinking. The seaplanes escorted the Marine contingent to Iceland in July of the same year.[1]

When hostilities commenced, the seaplanes were there. Part of the reason for the Japanese fleet’s northern approach to Pearl was due to the threat of being spotted by PBYs out of Midway and Hawaii.[2]

A PBY was involved in the sinking of a Japanese mini-submarine outside the harbor before the air raid started, first dropping smoke markers to help with localization and then dropping its own depth charges.[3] The plane transmitted a warning message to Pearl Harbor but it was not decoded until after the attack commenced.[4]

During the attack, most of the PBYs at Pearl were destroyed on the ground. The first Medal of Honor awarded during the war went to a PBY Chief Petty Officer, John Finn, who took a PBY’s machine gun and mounted it on a tripod to fight back at the attacking Japanese plans.

In the Philippines, the PBYs quickly found themselves extremely vulnerable to Japanese fighters and were withdrawn. In spite of the defeat, seaplanes showed their utility – they didn’t need the frequently targeted runways and could hide in hidden coves between missions. PBYs became the first Navy aircraft to attack Japanese surface ships and the first to score an air-air kill.

Moved south to the Dutch East Indies and later to Australia, they flew a number of missions in support of the stranded Philippine garrison. As the situation grew dire, they were tasked with a marathon multi-day 7000-mile mission to land, among others, Col. W. W. Fertig, who was to lead the resistance force, and evacuate a number of personnel including several Army cryptologists and nurses.[5]

After an inauspicious start, the seaplanes helped America regain the offensive. Their big moment came during the Battle of Midway. On 3 June 1942 a PBY spotted the Japanese occupation force, prompting attacks by B-17s and other aircraft.[6] Later that night, four PBYs made a torpedo attack on the force and hit a Japanese tanker. It was the only successful torpedo attack by American forces during the battle.[7]

Before the battle ended, the PBYs performed a humanitarian role: rescuing downed Aviators. Seaplanes were uniquely capable of search and rescue since they could spot downed airmen, then land to rescue them. The last Americans were rescued after 17 days in the water on 21 June.[8]

As the war continued seaplanes were some of the only aircraft capable of the long flights to attack Japanese forces in the Aleutians and, in 1942, became the first Navy aircraft to attack the Japanese home islands. The naval battles in support of the Solomons Campaign saw the seaplanes pressed into more frontline service; they played an integral role in interdicting Japanese night resupply convoys. Painted black with carbon soot, the first “Black Cat” squadrons preyed on Japanese resupply vessels with bombs, torpedoes, and guns. Some were armed with extra machine guns to go after lightly armored barges and personnel. They also orbited over Japanese positions and dropped beer bottles to keep them awake at night.[9] 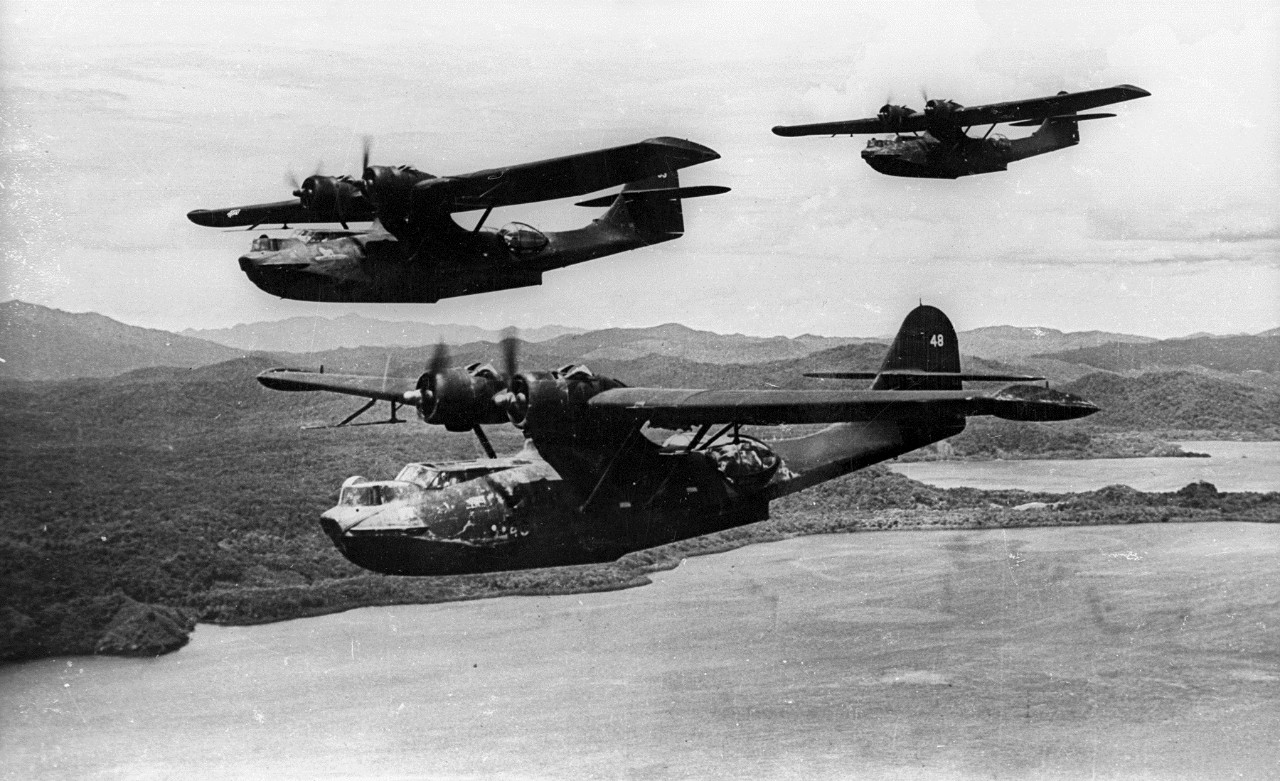 Figure 3: PBYs in the Solomons

Seaplanes conducted some of the first Navy signals intelligence missions, code-named Cast Mike, during the Guadalcanal Campaign. PBYs had extra space to carry antennas and analysis equipment and, after a number of missions, located a Japanese radar installation on Poporang Island. The information led to photo-reconnaissance and airstrikes. [10]

By the end of 1943, the PBYs were ageing fast. Already considered near-obsolete at the start of the war, they were increasingly assigned away from offensive roles to search and rescue or transport missions. After a Navy destroyer sank off of the Philippines in early 1944, two PBYs rescued 63 and 53 sailors, respectively.

As the PBYs were withdrawn, Martin PBM Mariners replaced their front-line mission. The Mariners were better suited to the search and rescue role once bombing raids began on the Japanese home islands. The Mariners performed anti-submarine warfare, mining, and reconnaissance missions as the offensive continued. With the war’s end, the seaplane’s glory days were over. In spite of the outsized role seaplanes played in the war, much of the public’s, and Navy’s, attention centered on the Fast Carrier Groups.

[2] Most patrols were to the South and West. Source: (https://www.usni.org/magazines/navalhistory/2009-12/how-japanese-did-it)

[6] This PBY was from VP-44 and piloted by Ensign Jack Reid.

(This essay, originally titled "Seamaster(y)," was published in three parts in the U.S. Naval Institute's Naval History Blog. This is part two.)