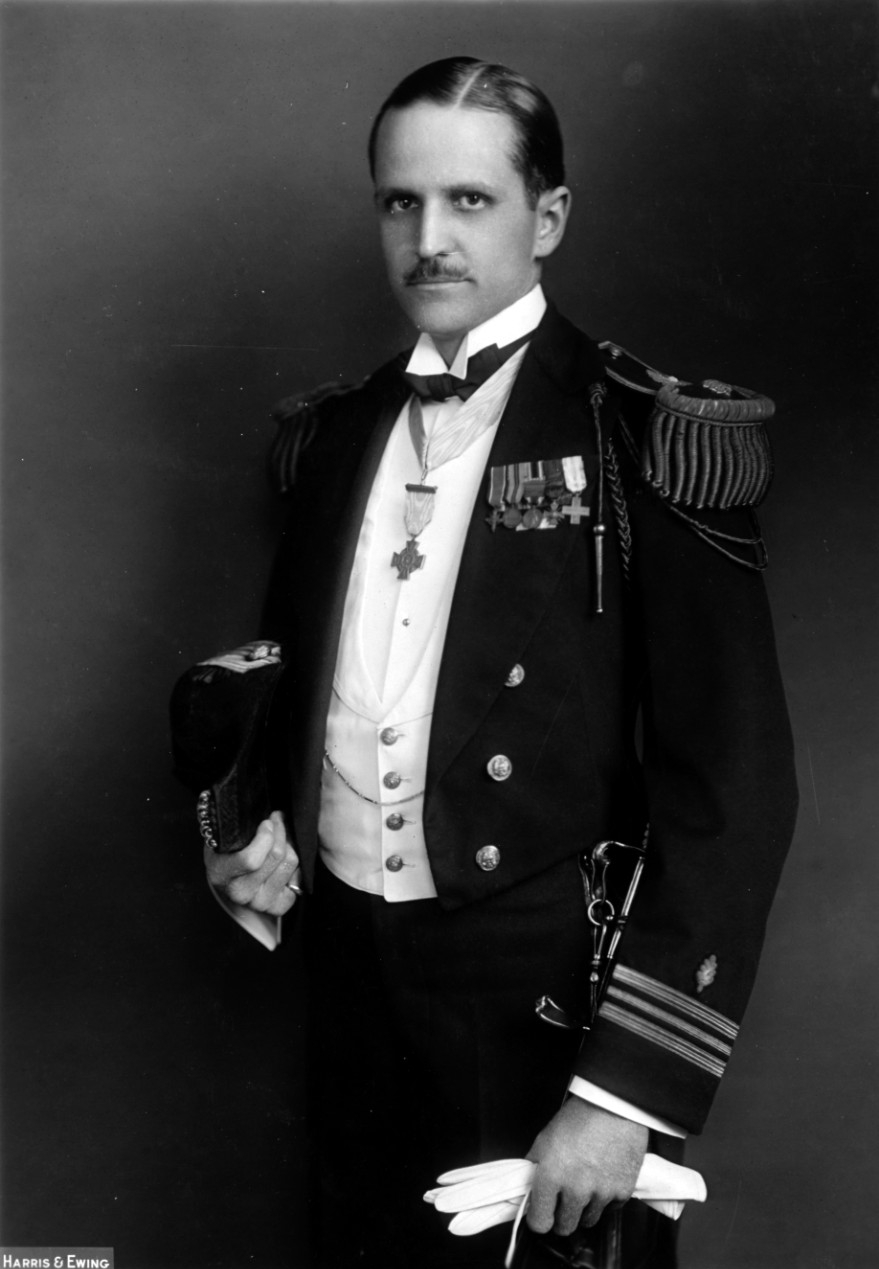 Lieutenant Commander Joel T. Boone, (M.C.), USN, Wearing the Medal of Honor awarded for his extraordinary heroism while helping the wounded during a battle in the vicinity of Vierzy, France, on 19 July 1918. Photograph by Harris and Ewing, Washington, D.C. U.S. Naval History and Heritage Command Photograph. (NH 51545)

The twentieth century was a bloody one, and few men had a fuller firsthand knowledge of the war-fueled nature of the century than Joel T. Boone of the United States Navy Medical Corps. Boone holds the unique distinction of service in both world wars and the Korean War. Along the way, he attained the rank of vice admiral, was personal physician to President Herbert Hoover, and later served as the head of the United States Department of Veterans Affairs. Fate was harder on Orlando H. Petty. A decorated veteran of the First World War, Petty’s body gave way to illness a decade later. He died of a self-inflicted gunshot wound in 1932.

Petty never found the lasting fame of a long and distinguished career that Boone enjoyed, but both men did achieve a measure of immortality. In the decisive summer of 1918, Boone and Petty each performed acts of heroism that merited the United States’ military’s foremost recognition: the Medal of Honor. For their deeds in the killing fields of Europe, these men became two of only four Navy physicians to receive the armed forces’ highest honor, and their stories form a crucial part of the Navy Medical Corps’ heritage.

The summer of 1918 was decisive in defeating the German Empire. After years of inconclusive stalemates, the Germans attempted a final, desperate push to end the war that spring, and for a brief time, it seemed their gamble might pay off. German troops drew perilously close to Paris, and Allied military leaders, including American John J. Pershing, quietly made plans for the emergency evacuation of their headquarters. The crisis forced Pershing to accelerate his timetable for putting American men on the Front. While he still hoped to build an entirely separate American army, the desperate situation compelled him to send some of the United States’ eager but untested troops into the fray under French command. In June and July, American units saw action in large numbers for the first time, and these men played a crucial role in blunting the German offensive and then driving the Allied armies forward toward Germany. They earned the respect of their European counterparts–friend and foe alike–with their reckless courage and dogged tenacity during those bloody months. Among the many who won lasting recognition for heroism under fire were two Navy physicians stationed with Marine divisions.

Orlando H. Petty earned the Medal of Honor during the Battle of Belleau Wood. “While under heavy fire of high explosive and gas shells in the town of Lucy, where his dressing station was located, Lieutenant Petty attended to and evacuated the wounded,” heedless of the “most trying conditions.” One explosion threw Petty to the ground and shredded his mask, rendering it useless. Petty tossed the mask aside, despite the real danger of poisonous gas, and kept working until another explosion wiped out his station. Petty had no choice to evacuate at that point, but even then he remained committed to his duty. Another wounded officer was unable to flee the scene on his own, and Petty hoisted him up and helped carry the injured man across the field of battle, with shells bursting all around them, to a safe haven behind the lines.

Joel T. Boone took part in the Aisne-Marne Offensive in July 1918. After a brutal march under cover of darkness, two divisions of American troops joined with one Moroccan division to launch a surprise attack on German forces. The battle was a resounding victory, but it came at heavy cost. Heavy fire mixed with toxic gases wreaked havoc on Boone’s corner of the fighting. He later remember the situation as “very bad,” especially after a “direct hit got a lot of our people.” Under the circumstances, Boone and the other medical personnel around him quickly exhausted their medical supplies, but they had little hope of more coming in; clogged roads made it impossible for trucks or ambulances to reach them. Instead, Boone raced out of cover and “onto an open field” where he was fully exposed to the death flying all about him. He pressed on and “despite the extreme enemy fire of all calibers, through a heavy mist of gas, applied dressings and first aid to wounded Marines.” Twice he ran through “a heavy barrage of large-caliber shell, both high explosive and gas,” to retrieve more medical supplies.

Both men survived the war and lived to make the return trip back across the Atlantic. Petty made his home in Philadelphia, Pennsylvania, where he served as personal physician to the state’s governor and, briefly, as director of public health. In the meantime, he became an expert in diabetes research. He claimed his own life after suffering from an undisclosed illness and was buried at Saint Timothy’s Episcopal Church. Boone went on to a distinguished naval career, and died in 1974 as one of the most decorated medical officers in American history. He is buried at Arlington National Cemetery.

Lieutenant Joel T. Boone, Medical Corps, United States Navy: For conspicuous gallantry and intrepidity at the risk of his life above and beyond the call of duty while serving with the 6th Regiment, United States Marines, in actual conflict with the enemy at and in the vicinity of Vierzy, France on 19 July 1918. With absolute disregard for personal safety, ever conscious and mindful of the suffering fallen, Lieutenant Boone, leaving the shelter of a ravine, went forward onto the open field where there was no protection and, despite the extreme enemy fire of all calibers, through a heavy mist of gas, applied dressings and first aid to wounded Marines. This occurred Southeast of Vierzy, near the cemetery, and on the road south from that town. When the dressings and supplies had been exhausted, he went through a heavy barrage of large-caliber shell, both high explosive and gas, to replenish these supplies, returning quickly with a sidecar load, and administered them in saving the lives of the wounded. A second trip, under the same conditions and for the same purpose, was made by Lieutenant Boone later that day. By his inspiring valor, steadfast perseverance, and selfless dedication to duty, Lieutenant Boone reflected great credit upon himself and upheld the highest traditions of the United States Naval Service.

Lieutenant Orlando H. Petty, Medical Corps, United States Navy: For conspicuous gallantry and intrepidity at the risk of his life above and beyond the call of duty while serving with the Fifth Regiment, United States Marines, in France during the attack in the Boise de Belleau on 11 June 1918. While under heavy fire of high explosive and gas shells in the town of Lucy, where his dressing station was located, Lieutenant Petty attended to and evacuated the wounded under most trying conditions. Having been knocked to the ground by an exploding gas shell which tore his mask, Lieutenant Petty discarded the mask and courageously continued his work. His dressing station being hit and demolished, he personally helped carry Captain Williams, wounded, through the shellfire to a place of safety. By his inspiring valor, steadfast perseverance, and selfless dedication to duty, Lieutenant Petty reflected great credit upon himself and upheld the highest traditions of the United States Naval Service.

The Story of Weedon Osborne, another Medal of Honor recipient at the Battle of Belleau Wood

The United States Marine Corps in the World War

Coffman, Edward M., The War to End All Wars: The American Military Experience in World War I. 2nd edition. Lexington, KY: The University Press of Kentucky, 1986.

The battle between the Aisne and Marne. The destroyed French depot near Fismes. The quantity of material left by the enemy is not to be overlooked. (NH 121836) 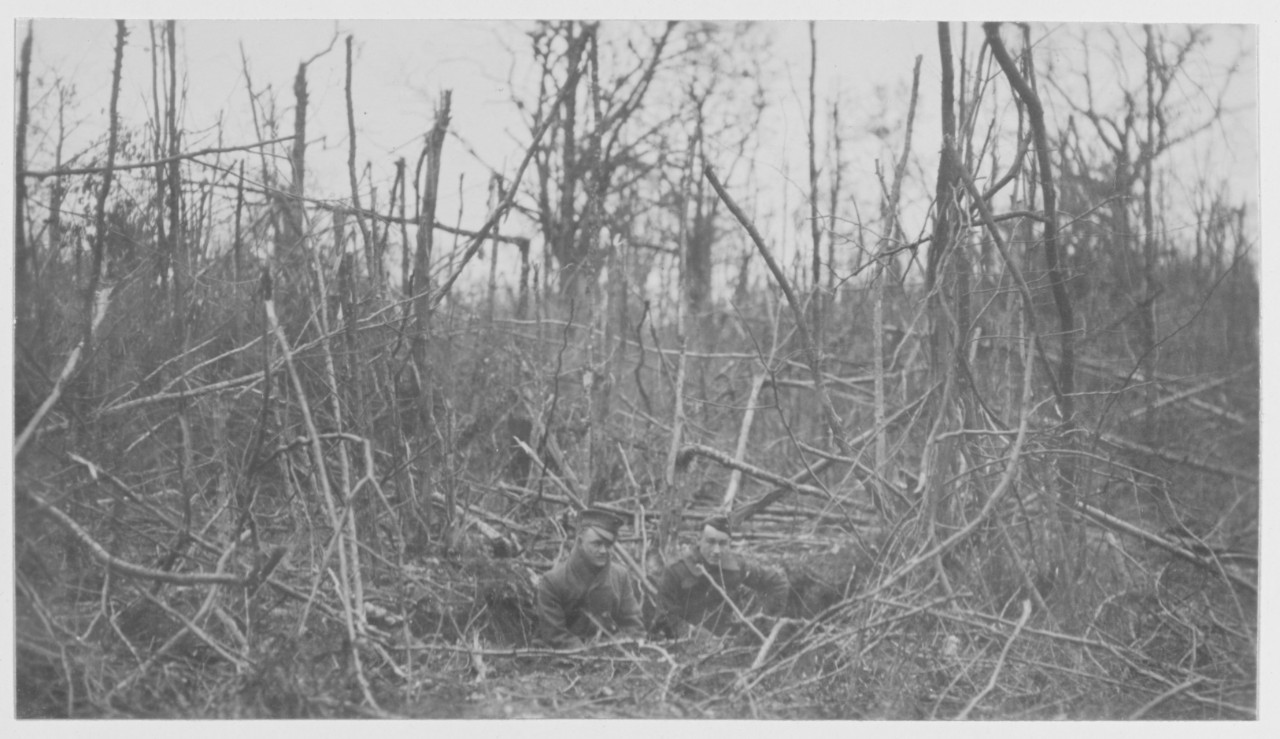