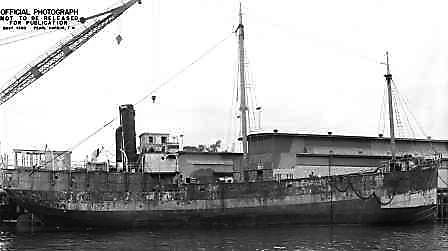 The freighter Domingo Nazabel I, completed in April 1920 at Long Beach, Calif., by the Long Beach Ship Building Co., operated under that name, first under U.S. registry, then under Mexican, then Cuban, before returning  (1925-1926) to American registry under the house flag of the Inter-Island Steam Navigation Co., of Honolulu, T.H., being renamed Mauna Loa in the process. By 1939, Mauna Loa was owned by R. B. Vickers, of Los Angeles, Calif., but she apparently changed hands yet again, for she was requisitioned by the War Shipping Administration of the U.S. Maritime Commission from Capt. W. W. Kibbee, also of Los Angeles, on 12 July 1942.

Acquired to serve as a “non-self propelled barracks ship in the Hawaiian area,” Mauna Loa, despite being adjudged in poor condition due to underwater hull corrosion, underwent conversion at the Pearl Harbor Navy Yard. Classified as a house boat (YHB) and given the designation YHB-10, the ship was placed in service at Pearl Harbor on 29 July 1942, CBM Wilbert “T” Harris, officer in charge. 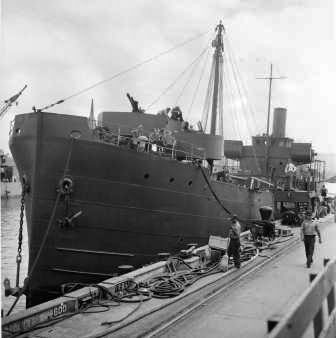 Embarking Sailors of the 5th Construction Battalion (SeaBees) as well as civilian contractors, YHB-10 sailed for French Frigate Shoals soon thereafter, arriving there on 13 August 1942 to disembark the men who would soon begin building a naval air facility there. That aviation entity, a sub-department of Naval Air Station, Pearl Harbor, was placed in operation on 17 March 1943 when the first draft of men, Lt. William S. Tenhagen, A-V(S), USNR, in charge, arrived at French Frigate Shoals.

YHB-10’s career proved short. Less than two years after the ship underwent conversion, the Board of Inspection and Survey, in a speedletter dated 1 May 1944, authorized a local board within the Fourteenth Naval District to convene and recommend her disposition. Over three months later, on 28 August 1944, the office of the Chief of Naval Operations (CNO) directed that Commandant, Fourteenth Naval District (ComFourteen) have YHB-10 towed to Pearl and place her out of service there, advising the CNO when the vessel was ready to be stricken. Given an initial estimated date of 20 January 1945, CNO pressed ComFourteen to advise of the ship’s status.

Soon thereafter, ComFourteen, on 21 February 1945, requested that YHB-10 be used as a torpedo target off French Frigate Shoals. A week later, a local sub-board of inspection and survey recommended that YHB-10 “be considered sufficiently stripped to permit being placed out of service as of 1 Mar[ch] 1945…” ComFourteen concurred with that recommendation, with authorization by the Secretary of the Navy and “Presidential approval” being requested for the ship to be used as a target.