Harry L. Glucksman was laid down on 18 March 1944 under a Maritime Commission contract (M. C. E. Hull 2445) at Savannah, Ga. by the Southeastern Shipbuilding Corp.; sponsored by Mrs. Celia W. Glucksman; launched on 29 April 1944, and completed and delivered on 20 May 1944 to her operators, the Merchants & Miners Transportation Co., of Baltimore, Maryland.

Transferred to the Isthmian Steamship Co., at Galveston, Texas, on 1 November 1946, Harry L. Glucksman was acquired by Dichman, Wright, & Pugh, at Baltimore, under a general agency agreement on 6 May 1948, but was placed in the Reserve fleet at Wilmington, N.C., soon thereafter, on 29 May 1948. Operated next by U.S. Navigation Co., Inc., the ship was transferred to her new operators at Wilmington on 20 November 1951 before being returned to inactive status at Wilmington at noon on 9 June 1952. Harry L. Glucksman resumed active service under the house flag of American Coal Shipping Co., Inc., at Wilmington on 29 November 1956, to transport cargoes of coal to Europe, until turned over on 17 March 1958 under a general agency agreement to Arrow Steamship Co., Ltd., at Newport News, Va., to be prepared for inactivation. Re-entering the Reserve Fleet, this time in the James River berthing area, on 31 March 1958, Harry L. Glucksman remained inactive until transferred to the Department of the Navy on 23 August 1966.

Acquired by the Navy on 23 August 1966, Harry L. Glucksman was removed from the James River Reserve Fleet and converted to a “minesweeper, special” (MSS) by the American Shipbuilding Co., Lorain, Ohio. The ship was filled with approximately 140,000 cubic feet of Styrofoam, while all compartments below the waterline were flooded for additional ballast -- to have the shock waves from nearby explosions pass through the steel hull. Magnetic coils ringed the main deck to enhance the ship’s magnetic field, so that the ship could detonate influence mines by presenting the maximum ship signature. The crew was also housed in a shock-mounted pilot house, while the ship was also powered by five inboard-outboard diesel engines mounted above the waterline to minimize the risk of damage or loss of propulsion and maneuverability. 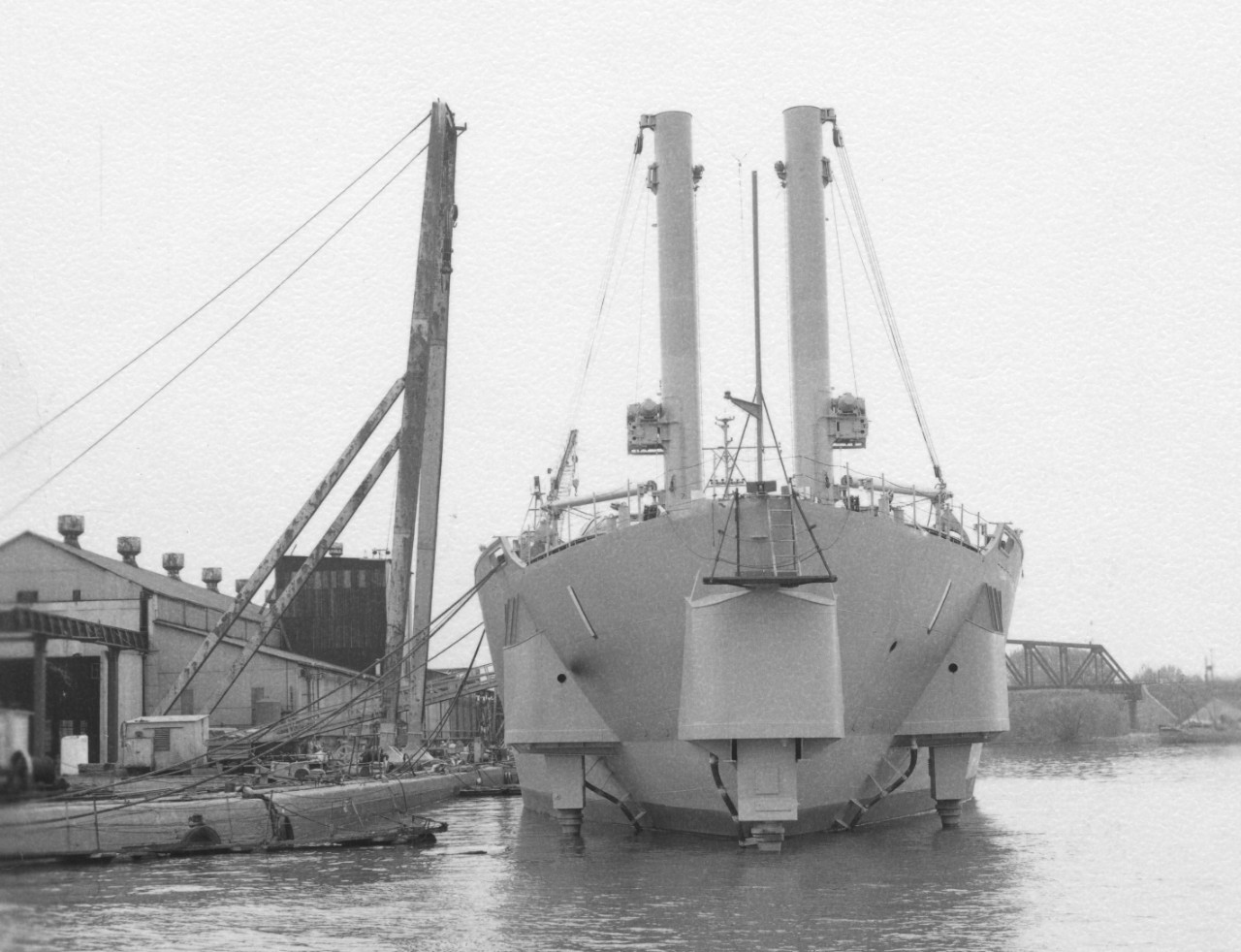 Placed in service as the unnamed MSS-1 on 19 June 1969, Lt. Eugene N. Cate, Jr., officer-in-charge, the ship was initially assigned to the Atlantic Fleet Mine Force. Taken to Boston [Mass.] Naval Shipyard, MSS-1 outfitted there before being towed from Boston to her assigned home port of Charleston, S.C., on 26 August, where she was assigned to Commander, Mine Forces, U.S. Atlantic Fleet.

The former Liberty underwent shock tests at Key West, Fla. (17-30 September 1969), returning to Charleston upon the completion of that work. During the first few weeks of January 1970, MSS-1 operated in company with the ocean minesweepers Adroit (MSO- 509), Dominant (MSO-431) and Sturdy (MSO-494), and she was reclassified to a combatant ship on 1 September 1970.

MSS-1 conducted further training at sea in January 1971, again in company with Adroit and  Exploit (MSO-440), then provided services for the Naval Ordnance Laboratory (NOL), Port Everglades, Fla. (30 March-21 April), after which she returned to her home port. Adroit later assisted MSS-1 during her speed trials on 6 March 1972.

MSS-1 was placed out of service at Charleston on 15 March 1973. Following the industrial phase of her inactivation by the Naval Inactive Ship Facility Detachment, Jacksonville Shipyards, Inc., Jacksonville, Fla., was transferred to the custody of the White Stack Towing Co., Inc., on 8 September 1973 for the voyage to the inactive ship facility at Philadelphia, Pa.. Permanently transferred back to the Maritime Administration on 2 September 1975 and sold to Luria Brothers & Co., Philadelphia, that same day for scrapping, ex-MSS-1, ex-Harry L. Glucksman, departed Philadelphia under tow of a civilian tug at 1500 on 17 September 1975 to begin her last voyage.